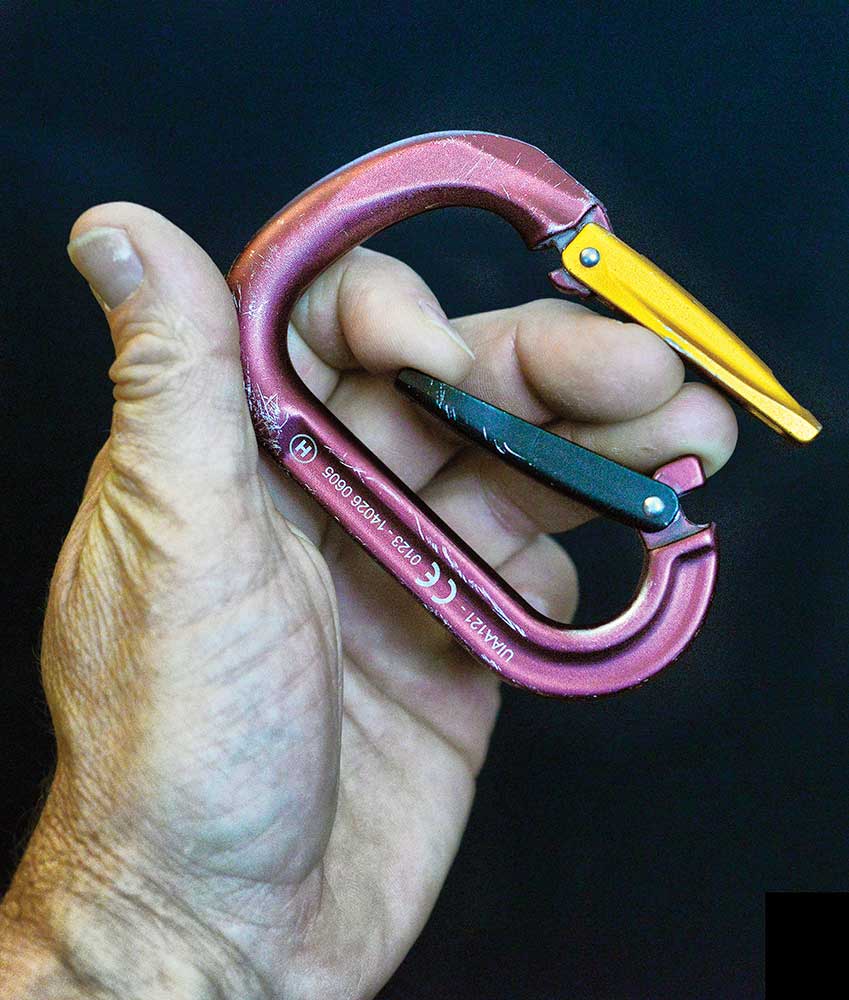 The Grivel Twingate carabiner isn’t the first design with two gates, but it is the best. Where the older RockExotica BiWire has its two openings on the same end of the gate, the Twingate has gates that open at opposite ends. Essentially, the Twingate is two biners with the gates reversed.

Grivel is so confident in the design that they say the Twingate can replace locking carabiners.

I used the Grivel Mega K6g, a large-framed, pear-shaped carabiner with two solid gates, with a Grigri, but the outer gate is too wide by a hair, requiring force and jiggling to usher through the clip-in hole. Unsatisfied with this process and unwilling to wait until Grivel slims down the gate, I lightly filed my Mega gate and now it effortlessly slips through a Grigri. As a Grigri biner, it is the best I’ve used. It is surprisingly easy to clip (after modification), and you don’t have to remember to lock a collar because the carabiner is always locked. Lacking a locking collar or sleeve, the Mega doesn’t hang up on the belay/rappel loop. Nor can a Grigri slip around and crossload the gate; the sandwich of the inner and outer gates is much too large for the Grigri hole to ride over. At 2.9 ounces, it weighs about the same as other similar-sized lockers.

The Mega does, of course, work with any ATC or tuber-style device. The real question is whether a Twingate can replace locking carabiners. To answer this, you must ask, “compared to what?”

Screwgate locking carabiners are known to unscrew or seize in icy or sandy conditions. Twistgate biners suffer the same shortcomings. The most foolproof locker I’ve used is the Black Diamond Magnetron, a carabiner with a magnet-and-pin locking mechanism, but even it can randomly stick shut for reasons yet undetermined.

The Twingate doesn’t have a locking mechanism to seize up. Like many other locking carabiners, the Twingate could, if it was pinned, get scraped open, although the slightly wider outer gate shields the inner gate, and if the outer gate is scraped open, the biner still has the inner gate closed. For both gates to open you have to have an inner and outer force on the gates at the same time. This is theoretically possible, but when I tried to make it happen, I couldn’t.

Short story: Yes, I’ll use the Mega in place of a locker for belaying and rappelling, and am psyched to finally have a locker that will remain operational in winter conditions.

For those of you who wonder how the Mega is to open when you are wearing gloves: Depends. It’s more difficult to operate than some lockers, easier than others.

> For belay and rappel.

> Large gate must be force-fit through a Grigri.

About the rating: The Mega lost a star because it doesn’t easily fit through a Grigri.

Stay tuned to Libertymountain.com for the Grivel Mega K6G Twingate Carabiner. Currently not listed, the innovative biner will be available soon.