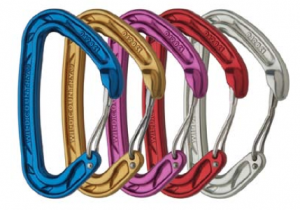 Once an anomaly, wire-gate carabiners are taking racks by storm. With more than 40 models swelling store shelves, choosing the right one is no longer an open-and-shut case.

Carabiners are like Rodney Dangerfield – they get no respect. When you fall, you thank your rope. When you tweak a thin high step, you bless your shoes. Yet, who pays homage to climbing’s most ubiquitous – and crucial – hardware, the unassuming carabiner? Without these wall flowers, a rope would be nothing more than a hank of braided nylon, and cams would amount to little more than highly engineered scraps of aluminum. It is the carabiner that pulls it all together, connecting the links in the protection chain. It is the carabiner, too, that carries your smegmus sneakers and water bottle, racks gear, and even keeps tabs on your car keys.

So bow your head and repeat in humble unison: “Dear carabiner, we are sorry if we overlooked you. We now recognize that you are the great giver of life, without which we are nothing.”

The name says it all: A wire-gate carabiner has a length of bent steel wire that serves as the gate. Unlike a bar-stock carabiner gate, which has multiple moving parts, including a small internal spring, a wire-gate is but one piece. The wire itself functions as both gate and spring. Its simplicity yields many benefits: These units are less apt to gunk- or ice-up, are inherently easier to clip, open wider, and weigh less than bar gates. On the safety side, a wire-gate doesn’t give up any strength, and, since the wire has less mass than a bar, it is less likely to whiplash open, a phenomenon that can occur when a carabiner vibrates or smacks against the rock in a fall.

In essence, wire-gates are better mousetraps – not perfect, but better. Because wire-gates are easy to clip, they are also easy to unclip. Wire-gates aren’t as ideal for carabiner-brake rappelling, where the cross-load torque might tweak the wires. No company has yet produced a true wire-gate locker.

Unlike regular, bar-stock carabiner gates, where a concave bend in the gate makes clipping the rope a smidge easier, bent wire-gates aren’t necessarily easier to operate than straight wire-gates. Every wire-gate naturally has a wide, flat face that is invariably easy to clip. “Clipability” is determined largely by how deep or shallow the carabiner’s rope cradle is, the frame’s nose design, and gate-spring tension. If the sum of all parts operates in harmony, the carabiner will be clip-friendly, regardless of gate shape. Nevertheless, climbers who prefer bent gates will be pleased to find more than half a dozen offerings to mull over. As with bent bar-stock gates, never use a bent wire-gate to clip directly to protection; it could unclip itself.

One carabiner won’t deplete your IRA, but the dozens you’ll need for even the most humble project, and the hundreds obligatory for big-walling, can ding your purse. Maddeningly, there’s neither rhyme nor reason to carabiner prices: $7 will land a nicely finished, top performer, while $10 or more might actually earn you a mediocre crab. Go figure. For pure nickel-squeezing, the Rock Empire Superlight (non-anodized) is a modest $3.95. Though the gates on the Superlight samples we tested varied in spring tension, and the rope-bearing surface is on the narrow side, the frame is a utilitarian shape and size, and at 1.3 ounces, the model is bantamweight.

You can buy most wire-gate carabiners individually, but Cassin and Fixe only sell their wire-gates pre-packaged with quickdraws or runners. Packages of this sort can save you a few bucks – typically they are priced so you get the draw component for free. Note: Only the draw sets that don’t let you purchase individual carabiners are listed in the chart as packages. Many other companies do offer packaged sets, but are not included in this review.

Anodized carabiners – those coated with a protective/decorative oxide – are sportier, and moreover, faster to visually locate, helping you better organize belay and rappel anchors, where you often have clusters of biners nested together, each one clipped to something or other. The chart notes anodized carabiners. You’ll pay $.30 to $1.50 more for these models.

Often, only a tenth of an ounce (the weight of a dime) separates one carabiner from another. Though you are unlikely to notice a single dime in your pocket, a trouser-full of change will yank your pants right off. The moral? Carabiner weight matters, but only in proportion to the number of carabiners you carry. On a long sport route, where you might load up with a dozen or more draws, the difference between the 1.1-ounce Trango Superfly and any middle-of-the-pack 1.5-ounce biner is more than half a pound, i.e., noticeable. Yet on shorty routes, say the four-bolt Z Clip at Independence Pass, Colorado, the weight difference is negligible.

Be mindful, too, that “superlight” carabiners can have a smaller-diameter rope-bearing surface, increasing rope wear, and, because they contain less metal, won’t take as much abuse as larger-gauge models. They also won’t rack as much gear, and can be difficult to grab. One exception is the Wild Country Helium, a full-bodied biner that weighs 1.2 ounces.

Carabiners, like your extended family, come in all shapes and sizes. They also fall into quantifiable categories: small, medium, large and extra-large. Small carabiners – the Black Diamond Neutrino, Omega Pacific Doval and JC, and the Trango Superfly – can be significantly lighter and less bulky than their bigger brethren. The tradeoff is that they won’t rack as much gear, are tougher to grab, can cramp large fingers when you try to clip in a rope, and won’t accommodate as many ropes/slings. Smaller biners aren’t necessarily lighter, either (see chart). These diminutive designs are most useful on the gear-clipping end of a draw or runner, and for racking wires. Of the four smallest carabiners, the JC is an aberration, having a rope well that rivals large carabiners, and a rope-bearing surface that is the widest (i.e., most rope friendly) of any biner in this review.

Most carabiners herein are medium to large, and represent the real workhorses of any rack. Only one carabiner, the Omega Pacific Five-O, qualifies as an XL. This behemoth dwarfs all contenders – its giant frame gobbles up rope and rack like no other. It is ideal for organizing belays and rigging, and is the easiest of all carabiners to handle when wearing gloves. Surprisingly, this monster only weighs a tenth of an ounce more than the average large biner, and is even lighter than some.

Every carabiner in this review is Comité

While all CE-approved carabiners meet strict standards, a number of manufacturers go further by either individually testing each biner and/or testing a sample from each batch to destruction. Individually testing can catch manufacturing snafus, such as a frame that hasn’t been properly heat-treated, while destructive batch testing can also ferret out flaws, such as inconsistencies in materials and manufacturing. Both tests increase a carabiner’s price, but consider it money well spent.

The diameter of the surface over which the rope will travel – and where it rubs when you hangdog or rap – dictates how mean or kind that given biner is to your long-suffering cord. Though any carabiner’s “rope cradle” is round, think of it as an edge. The smaller the edge, the more wear it will put on your rope. Alongside weight and clipability, rope-bearing diameter is a key deciding factor in carabiner selection. In this case, bigger really is better.

With few exceptions, the majority of carabiners have similar-feeling “medium-stiff” wire-gate action. Next to carabiner aesthetics, gate action will determine whether you love or loathe your biner. The chart (pages 90 and 91) ranks carabiners as having either “medium” or “stiff” gates. Use these as reference points only. The real test will be in your hands.

A carabiner’s gate opening will help determine how much gear and rope you can cram into it. Wide-mouthed gates will swallow myriad ropes and anchors. Don’t, however, equate gate-opening size with clipability.