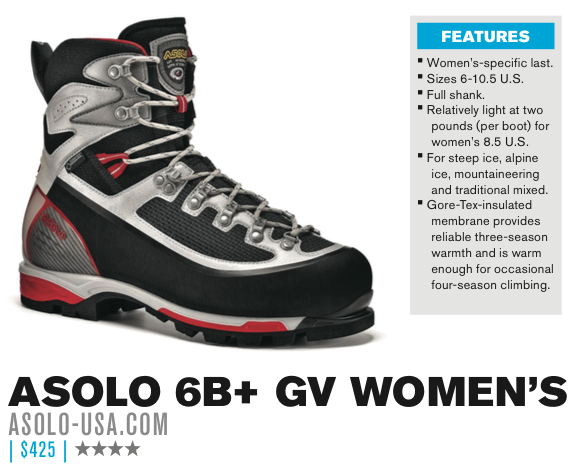 While Asolo advertises the boot as a general mountaineering boot for ice and glacier travel, it is ideally suited to steep terrain. I tested the boot while guiding and climbing in the North Cascades and used it on pitch after pitch of steep ice. The full nylon/fiberglass shank gives the sole a stiff feel and inspires confidence when you sink your frontpoints. While I often have issues with heel-lift in boots, I didn’t have that issue with the 6B+ GV. In fact, the boot fit well everywhere. The midfoot had just the right amount of space—I could layer warm, puffy socks, but there wasn’t so much space that my foot would slide around if I didn’t. The lacing system let the boot cinch down comfortably and snugly without causing “shin banging.”

I also really liked the overall last and shape of the boot—the women’s last made a difference and let the boot conform to the shape of my foot more than the men’s boots I own. I use men’s gear all the time, and the 6B+ GV is an example of where women’s gear really makes a difference in performance and comfort.

The 6B+ GV is more insulated than other single boots, and you could use it as four-season footwear in the Lower 48, though on subzero days you’ll still want a double boot. (Menfolk, if you like the sound of this utility, Asolo also retails a men’s version of the 6B+ GV).

While the full shank of the 6B+ GV is great for steep ice, it does make the boot less agile for hiking and glacier slogging. Because of the stiff sole, you have to adopt a flat-footed, storm-trooper walk down the trail.

Plusses and minuses of a full shank aside, the main thing that makes these boots stand out from other ice boots is the women’s-specific last. Asolo shaped the boot to account for the differences in women’s calf, foot and ankle muscles. Asolo declined to share more detailed information on the design for fear of giving away trade secrets.