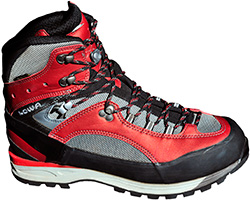 It’s spring. Sheep are bleating in green fields. Chicks cry for worms. Mountaineers shake off their frosty coils and turn toward the mountains where couloirs and ridges are crusted with just the right mix of neve and snow. Time for peak bagging! But selecting footwear presents a labyrinth of decisions. Do you go with a heavy mountain boot, approach shoe or something in between? I vote in between.

The Lowa Vajolet GTX is a mid-weight ankle-high boot with a full rubber rand and medium flex. It’s lighter than a full alpine or mountaineering boot, and heavier than even the beefiest approach shoe. Pair it with a gaiter to keep snow out of the boot top, and it’s a spring-time mountain killer that eats slushy trails, scree and moderate mountaineering for breakfast.

For hiking, the Vajolet feels light and agile, and is supportive and protective enough to keep you from getting footsore in even sharp scree. For climbing, it handles low fifth-class rock just fine, and takes a strap-on hybrid crampon such as the aluminum XLC Nanotech by CAMP. Note that I said “hybrid” crampon. While the Vajolet accepts a step-in crampon heel lever, the toe does not have a welt and the boot is too flexible to be step-in compatible.

But that doesn’t matter. Fitted with a hybrid crampon, the Vajolet is an apt snow and easy ice climber. I wore it for general mountaineering in temperatures down to just below freezing and can report that it felt locked on and had minimal heel lift. It’s a great go-to boot for mostly non-technical routes with long approaches, yet where you need the ability to strap on a crampon.