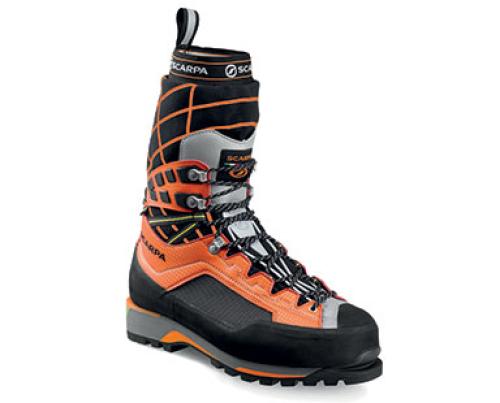 The Rebel Ultra GTX is the lightest insulated technical climbing boots ever made. The next lightest boot, the Asolo Eiger (3 pounds 12 ounces per pair US men’s 9, 42.5), is The Rebel Ultra GTX weighs just just 3 pounds 4 ounces for a size 42 (US mens’9)  and it feels more like a lightweight trail hiker than a serious boot.

But it is serious. The Rebel Ultra was designed with input from Ueli Steck, who wanted a light and warm rig for running up and down things like the Eiger North Face before most people hit the snooze alarm. I could end the review right here and you would know plenty, but these boots are so out-of-the-box solid I’ll keep going.

The Rebel Ultra GTX is the first boot that brings much of the performance of a fruitboot into the mountain-boot world. When fruitboots first came out I figured that these game changers would soon be on everyone’s feet, but they never caught on and most companies dropped them from production. My guess is fruitboots just aren’t warm enough and are too expensive. Not being able to remove the crampon from a fruitboot also probably killed sales. Having to own TWO pairs of expensive boots, one to hike in and another to climb in, and having to  carry fruitboots in your already-too-heavy winter pack was a bummer.

I was burned by my fruitboot prediction, but I go ahead and say that the Rebel Ultra will be a boot that everyone will want, and one that competitors will want to copy. It’s like a fruitboot, but warmer, less expensive and you can take the fucking crampon off.