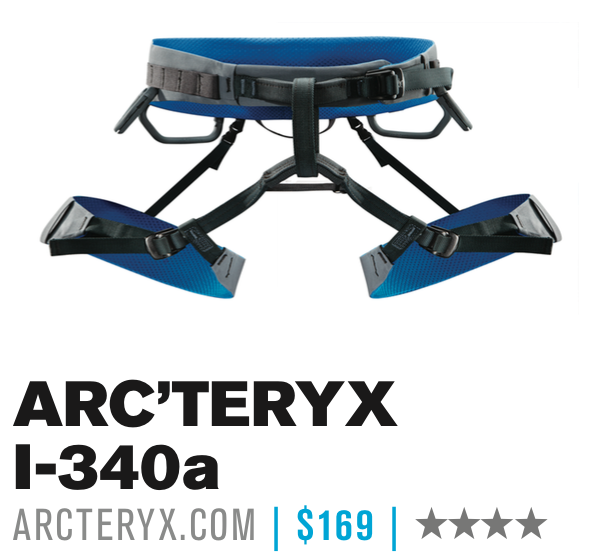 Arc’teryx markets the I-340A as a lightweight ice-climbing harness, but I think they are full of poppycock! I used the harness as my primary rig for nearly a year and found that it is the best lightweight (12-ounce) adjustable sport harness I’ve used. I wore it well over a hundred times,
hung in it for several days, and give it the thumbs up. It also excels on ice, but if I have to pigeon-hole the harness, I’ll call it an all-arounder.

The I-340A relies on “Warp Strength Technology” where the webbing is fanned out and relies on its width rather than padding for comfort. This lets the harness pack small and not feel bulky when you’re wearing it. I was never uncomfortable in the harness.

Four gear loops are well positioned—not so far forward that draws or gear flop into your crotch; not so far back that you lose stuff. Thirteen ice clipper loops let you attach clippers wherever you’d like, but most of the loops are unusable, either too far forward or back, and the clippers, when
set where I prefer them, interfered with the gear loops. Because the waist belt is so supple, the hard plastic clippers can dig into your vitals when
you hang.

Adjustability was great. There’s plenty of range. The buckles are on the difficult side to tighten or loosen, but you don’t have to partly unthread them to adjust and they don’t creep loose. The rear elastic keeper loops are minimalist, and release for the “call of duty.”

One thing I don’t like is the small strap with buckle that keeps the belay/rappel loop centered. This kept unbuckling itself, and is so difficult to reattach that I ended up leaving it undone. This didn’t affect anything other than being annoying.

Arc’teryx isn’t known for making cheap stuff, and at $169 the I-340A is their most expensive harness. It is, in fact, the most expensive harness, period. I tied into the harness between 300 and 500 times, however, and the harness shows minimal wear. Although the I-340A feels flimsy, I’ll give it an “A” for durability, and I anticipate getting a couple more years of regular (two to three days a week) use out of it. Seems the old axiom holds true: You get what you pay for.

ABOUT THE RATING: This is a five-star harness that get four stars because it’s expensive.