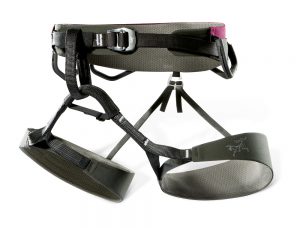 It is a cliché to say you don’t even notice a harness is on, but so it is with the women’s harness in the Arc’teryx bunch. The harness is gossamer light, so much so that at first I felt oddly alarmed at using such an apparent trifle. That feeling lasted, oh, about two minutes. In practice, the harness just goes along with you, calling no attention to itself.

However, unlike my male co-worker, I do sometimes have leg-loop “issues,” and found the elastic that tightens the loops, at least in the Medium I wore (my normal size) a little snug.

Also unlike said coworker, I habitually stow any harness waistband end into its accompanying tunnel. The waistband is plenty long enough to reach, but stuffing the tail end in the tunnel was frustratingly difficult. Also, I prefer gear loops that are molded flush to the harness, protruding slightly, rather than hanging by half an inch of webbing. The loops themselves are nice and wide, well-shaped with a forward bend.