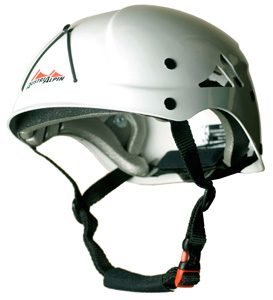 It’s hard to put  a price on your head, but mine is apparently worth $60, or exactly what the new AustriAlpin helmet costs. This winter I used the Headshell for mixed and ice climbing, pursuits that, with their falling blocks and sharp implements, are famously hard on noggins. I can report that my head and the helmet are doing fine.

The Headshell is an old-school meets new-school design. On the outside, the brain bucket sports a tough plastic shell instead of some fancy-schmancy hyper-light polysomething that chips when you bang it against sharp tools or screws, or cracks when you accidentally sit on it sideways. The helmet’s hardness alone gave it high marks on my scorecard. That the plastic has the helmet tipping the scales at 12.5 ounces, three or four ounces more than polycarbonate jobs, didn’t matter a whit to me. Inside, a polystyrene skull cap and side foam padding get the helmet through the battery of required CE tests, including one where they drop a five-pound pointed weight over six feet onto the crown of the helmet. Cripes! Mercifully, I can’t attest to how well it stops iron bullets in real life. A ratchet cranks the unit snugly to your head in mere seconds (I love that bit) to custom fit a shaved or bushy head with equal aplomb.

I gave the helmet three out of five stars because while it is a fine plastic helmet, it is old fashioned and heavy compared to more modern versions such as the Petzl Sirocco and the Black Diamond Vapor.