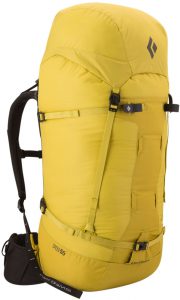 In my pack, I usually have at a minimum a rack of 12 to 20 draws, harness, belay device, chalk bag, two quarts of water, snacks, a rope, jacket, and for trad routes add a rack. For ice or alpine routes, throw in six to 10 ice screws, a change of gloves, headlamp, helmet, a belay jacket and a thermos. Accordingly, I need a pack that can carry junk and that means a 3,000-cubic-inch capacity, minimum. That’s not a glorified kid’s bookpack nor is it a ropetarp with pockets. It’s a real climbing pack and usually not a lightweight one. On a good day that pack weighs 20 pounds, on a heavy one it’s 30.

I’ve tested many superlight alpine packs that are made from techy fabrics that can stop micrometeorites. Typically, these featherweights with their minimal to non-existent suspensions carry like onion sacks and cost so much they can max out a gold card. They are also usually too small because the people using them don’t mind freezing to death or going without food.

Black Diamond’s 2014 version of the Speed 55 is a technical one-pack-does-almost-all jobs with a 3,365 cubic-inch capacity, enough for big-day outings. If you are going to bivy with a bag and pad and more food, allow me to suggest the Mission 75 and its 4,577 cubic-inch capacity (I haven’t used this model). NOTE: The specs listed in the Gear Guide listing are for the 2013 model. These will update once the 2014 version that is reviewed here becomes available.

Costing under $200 and weighing 2 pounds 13 ounces, and able to strip down (removing the plastic backsheet cuts eight ounces, for example) to an even lighter weight, the Speed 55 is a worthy pack for average people like me who don’t have a trustfund and require affordable and versatile gear that really works.

The suspension binds on you less than other packs, and gives the ride an organic feel.

I wore the pack maxed out with the extension sleeve all the way up, barely able to close, and loaded with heavy things including concrete (don’t ask) and I can vouch for its comfortable carry. A plastic framesheet keeps cam lobes and other hard items out of your body and a thermo-formed back panel is as kind to your back as a Herman Miller chair. The shoulder straps are dense, hard even, and at first I didn’t like them. But after a few outings I discovered that they are actually more comfortable than the softer straps of other packs. A thinly foamed but wide hip belt hugs your hip bones like long-lost family. Two small gear loops on the belt are a loving touch.

The Speed 55 has what Black Diamond calls a “Reactive Suspension.” For a lightweight, relatively inexpensive pack, the suspension is remarkable. It’s Formula One engineering at a VW price. The shoulder straps connect to one another via a small cable that runs through the bottom of the pack. When you swing or lift an arm, the cable shifts to lengthen the shoulder strap of that arm. Black Diamond says that this keeps the load “perfectly balanced” and lets you “cover more ground, more quickly.” I couldn’t figure out how to measure those benefits, but I certainly noticed that the suspension binds on you less than other packs, and gives the ride an organic feel. It’s the difference between being strapped to a backboard and giving a child a piggyback ride. This is a sensation you have to experience—the closest I’ve ever felt to it was with the old “Yak Pak,” an odd, hippie pack of the 1970s with floating shoulder straps that never caught on and came and went so quickly it could have been part of The Sixth Extinction. 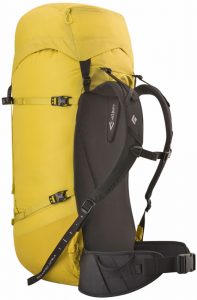 • Floating top lid lets you overstuff the extension sleeve. A lot of pack makers sewn down the lid so the sleeve can’t fully extend. Bad!

• Has hydration system pouch and a hole for the drinking tube. I don’t like or use hydration systems, but respect that others do, so this is a good feature to have, and you could use the pouch to stash small things such as a headlamp that you don’t want falling to the bottom of the pack.

• Has minimal straps that are trim.

• The extension sleeve and main compartment close quickly and easily with just a tug on their cords. A yank releases them.

• Has a reinforced exterior crampon-carrying patch. I wish this came with straps … despite me just saying that I liked the pack’s minimal use of straps.

• Velcro ice-tool shaft tie downs won’t stretch out like the elastic ones and won’t tangle or freeze like knotted cord. The tool-carrying system is secure for any shaft shape, including straight to the most radically bent/curved.

This is a solid choice for anyone who goes into the mountains or ice climbs. It’s even a good crag pack, although if you drag it around on the ground it is going to get holes. As an alpine and ice pack, it’s nearly as light as the much more expensive “Spectra” models, and it carries so much better it’s no contest. Fanatics will appreciate that you can strip it down and reduce weight by nearly a pound. Even stripped it carries well as the thermo-formed back panel is integral and gives the pack some structure.

I gave this pack four of five possible stars. It could be a five-star pack. I’ve never used a pack that was better, or as good. I gave the Speed 55 four stars because I wonder about the long-term durability of the moving part, the cable system. This might be fine, but it’s new technology and I’d like to give it more time to prove itself.

Unrelated, my pack got small holes in the bottom after just a few outings. These were caused by loading cams in the bottom then setting the pack down on rock, and butt-scuffing down steep, slabby talus, and are cosmetic. Clearly, this is not a haul pack and if you drag it up a rock wall it is going to suffer. The top lid doesn’t have a zipper flap; something to keep in mind if it is dripping or raining, and if you haul the pack the zipper could get dinged. I also found the buckles that secure the top lid were difficult to unfasten when my hands were cold or tired—the BD buckles take more pinch strength to operate than the typical plastic ones.

If after a thrashing season of ice and mixed climbing the Speed 55 has held up, I’ll revise the rating to five stars.