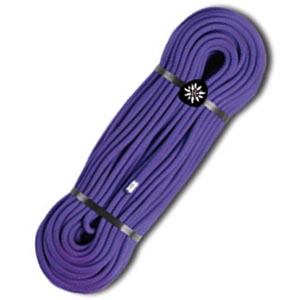 When I ponder all things climbing-related and Teutonic, images of hulking übermenschen cranking one-arms off monodoigts and clipping in with big, beefy cords come to mind. Surprise, then, that one of the latest offerings from German manufacturer Edelweiss is a trimmed-down single rope, the 9.2mm Performance, which clocks in at a mere 7 pounds for a 60-meter dry-treated cord. (A 70-meter version is available for $207.)

I tested this rope on routes both trad and sport, long and short. The 9.2mm is a hair too slim to work comfortably with a Grigri (try the new Fader’s SUM, reviewed above), especially for sport-wanking dog-a-thons, but is a godsend for trad climbing. I took this rope up on Idyllwild, California’s, The Vampire (5.11a). This daunting line, with its route-finding nebulousness, holdless traverses and long runouts, demands a light, smooth-feeding cord. The Performance was just that, and, when used with an ATC-style device, felt plenty beefy in the belayer’s hands. On single-pitch routes, such as the grainy, punishing cracks of Joshua Tree, the rope excelled as well, clipping quickly and smoothly into gear, and feeling light and nimble in my quivering mitts. Thus, it would also make for a good sport-climbing redpoint cord, especially suited to long, rope-stretching pitches.
The drawback to such a small-diameter rope comes when rappelling: I had to keep both hands on the brake side of the device for fear of losing control. This problem is easily remedied, however, by passing the rope under your bum or wearing a glove.