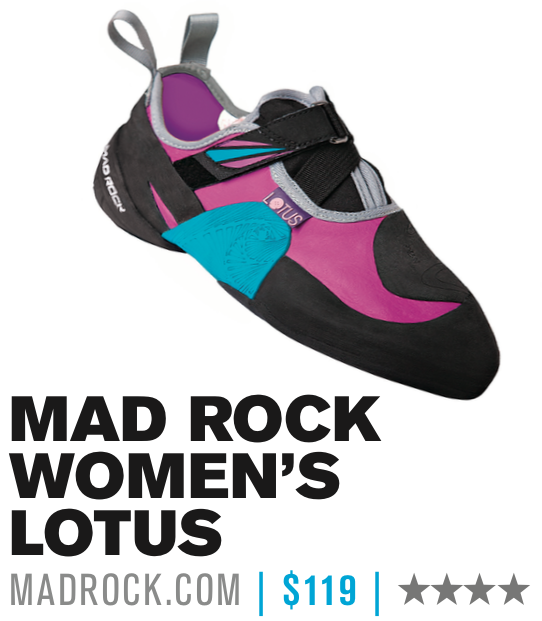 Skepticism, brand prejudice, rubber rumors … these are a few reason’s why I initially doubted the new Women’s Lotus by Mad Rock. So I began
climbing in the Lotus exclusively while warming up, unwilling to risk trying out a new shoe while repointing, or worse, during an onsight. I would put on the downturned velcro slippers, remind my belayer I was in new shoes, and start analyzing them with every move as I lazily made my way up the handful of sport climbs I have ridiculously dialed.

About three weeks into my routine of warming-up in the Lotus, however, I absent-mindedly ventured into unknown territory. As I pulled into a short crux on a route I’d never climbed I looked down … oh no! I had forgotten to switch back to my “tried and true” shoes, and I was cruxing.
I instinctually let out a defeated “Take!” but luckily, my belayer was slow to take up slack. As I sucked into the wall, awaiting the tension of the
rope, I pulled through the crux, screaming “No, don’t take!”

Embarrassment aside, I pressed on and closed-in on a rare first-try send. By the time I clipped the chains, the Lotus had officially impressed me.

The Mad Rock Lotus is a women’s specific performance slipper that has been designed for “tackling comps and especially overhanging terrain,” according to Mad Rock. The shoe is moderately downturned with a slight asymmetry. The shoe has a neoprene split tongue and single hook-and-loop closure tab that criss-crosses the top of the shoe. The closure secures the shoe well, but the strap keeps the split tongue from opening completely.

The initial fit is snug and aggressively sized—meaning don’t downsize at all with the Lotus. For example, I wear a size 8 street shoe and wore the
Lotus in an 8.5 for a true performance fit. Over time the synthetic Syn Flex uppers stretched out only slightly, less than a half size. If you don’t like insanely tight shoes, size up. The shoe fit my mid-volume foot well with no gapping or puckering.

Mad Rock preaches the gospel of performance without pain, and I’m now a believer. The Lotus strikes a balance between tension and comfort without heavily sacrificing power to the toe. The shoe securely cups your mid-foot thanks to the elastic Arch Flex system. The midsole on the Lotus is quite soft, so on any terrain except for steeply overhanging routes, you’ll be relying on foot strength. After a long, gently overhanging pitch with a lot of stemming, my feet were noticeably tired. The toe-box is stiffer than the mid-sole, and left me wanting a bit more sensitivity for precise smears.

I’ve worn the Lotus while sport climbing on both limestone and granite and while training in the gym. They’ve excelled on all overhanging terrain, and can heel or toe hook as well as any shoe I’ve ever worn. The extra flange of rubber on the heel cup didn’t improve my heel hooking ability, but it stayed comfortably in place. The Science Friction 3.0 rubber performed well on all surfaces, with average durability.

This shoe would be a great option for women looking to transition from an all-around shoe into a sport-climbing and bouldering-oriented pair. If you’ve been hesitant to commit to a downturned, asymmetrical shoe because of price, the women’s Lotus is a great shoe to try. At $119, the Lotus provides a performance shape without breaking the bank. The Lotus is also an economical and comfortable choice for gym climbing. I will certainly be seen happily sporting the Lotus all winter in the gym.

One qualm I had with the Lotus is its looks. Recently someone inquired about my apparent “love of purple.” I looked down at my purple and teal pair of Lotus, my purple harness and remembered the purple pom pom on my winter hat. In truth, purple is not my favorite color, but it is a palette commonly forced upon female climbers who want to wear gear tailored to our bodies. We also love green, blue, red, yellow, really the entire spectrum. Please, gear manufactures, I don’t want to dress like My Little Pony any longer.

ABOUT THE RATING: These shoes combine performance, comfort and a very reasonable price point. I gave them four stars because I would like a bit more sensitivity in the toe area, and because the closure system kept the shoe from opening completely.