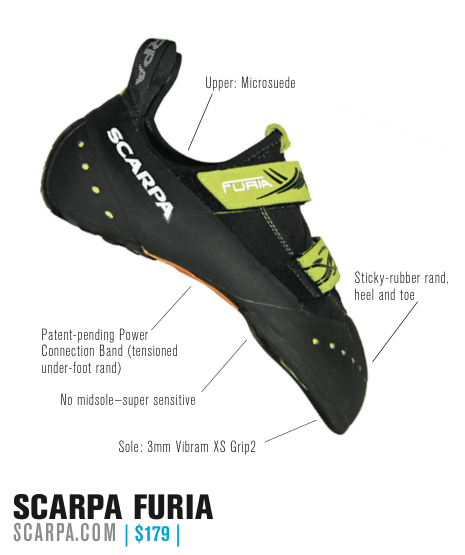 I’m a sensitive guy. Candlelight and kitties hold a special place in my heart. Being in touch with my feelings has also made me love sensitive climbing shoes. Such as the
Scarpa Furia. The Furia is the softest shoe Scarpa’s master cobbler Heinz Mariacher has ever created. Mariacher made the Furia without a midsole, relying
instead on fit and a tensioned, under-foot rand for support. The toe box on the Furia is a little narrower than on other models, which can help eliminate dead space in the front of the shoe. The entire forefoot, sides and heel are sheathed in sticky rubber, making the shoe incredibly adept at all manners of hooking, a welcome addition as most of today’s shoes lack sticky rubber in these areas.

Speaking of feelings, there’s no midsole between you and your foothold. This socklike sensitivity means you can really feel every bump and ripple underfoot, which imparts a feeling of security, even dare I say, attachment. Dare I also say that this is the softest shoe I’ve worn— it requires strong feet to milk every drop of performance from it. If you don’t already climb in a soft shoe, the Furia might take getting used to.

I have a narrow foot, and the front of the Furia fits like a glove and is remarkably comfortable for such a tight squeeze. Folks with wider feet may want to upsize a half over their regular Scarpa size. Unlike the front of the shoe, the heel is baggy, with two little pouches on the sides that remind me of the bags that develop under my eyes when I cry at the movies. The bags are, however, only cosmetic for me, and didn’t affect performance.

The Furias, as you would expect from Scarpa, are extremely well made. This is one of Scarpa’s top-end shoes, geared for performance on steep terrain. Indeed, I dig them for steep sport climbing, bouldering and even low-angle smearing. They’re sensitive, and that’s OK.