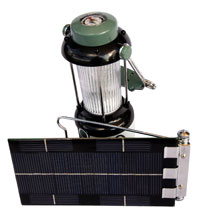 Man’s greatest invention wasn’t the lunar module. Nor was it bronze or the sea clock. It was fire. Fire, and its by-product light, transformed man from a baying sheep to a civilized life-taker. Ledtronic’s SLR lantern is fire’s latest iteration, and a welcome one at that.

Powered by a rechargeable cell and lit with a cluster of LED bulbs, the SLR turns those dark, creepy campsites into vestibules of heaven. Ledtronics says the lantern puts out 3.4 end foot-candles of light. I have no idea what that means in English, but it seems somewhere close to the light of a 20-watt incandescent bulb, or just enough light to illuminate the inside of a tent, van or picnic table. Although the light isn’t nearly as bright as, say, the nuclear Coleman lantern, it also doesn’t put off toxic fumes, pose a fire danger or—and this is the part I like most—ever need any fuel. When the lantern gets low, plug it into a solar panel (provided) and the sun does the rest. An eight-hour charge seems to last three or four nights.

Weighing 1 pound 9 ounces, the lantern isn’t for fast-and-light travel. It’s use is limited to car camping, which is to say that it’s hardly limited at all, since, honestly, most of us doss by our rigs 99 percent of the time.

At $50 the SLR is a screaming deal. It costs less than many LED headlamps, in fact. That said, the lampshade casts a striped shadow that makes reading a struggle. But more importantly, the compass that’s built into the top of the rugged lantern doesn’t work for sheetcake, spinning this way, and that as if under the spell of Captain Jack Sparrow.