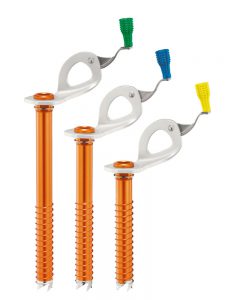 Weighing just over half that of its counterpart made of steel, the aluminum Laser Speed Light can nearly slash the weight of your ice rack in half. To compare, a medium-length, 13 centimeter Speed Light is 2.3 ounces, while the regular steel Laser Speed checks in at 4.5 ounces.

While the Speed Light isn’t the first aluminum ice screw—Lowe had one back in the 1980s—it is the latest and best, and by quite a lot. Although not available until July 2014, I was able to get a sample and test it at the end of the 2013 winter and the beginning of 2013/2014. The screw is impressive. Besides being light, it is easy to start—the crux of placing ice pro—and spins in with relative ease thanks to an extendable handle. In head-to-head tests, the Laser Speed had a slight edge over the Black Diamond Express, although barely. The 13 and 17 cm screws from both brands took 10 to 15 seconds on average to start and screw in. Although the times were the same, I do have to give the Speed Light a slight edge for being easier to start. The Speed Light’s slightly longer teeth engage just a bit better than those of the Express. With the Express, I was able more often than not to set the screw with one stab and twist, then could let go without the screw falling out of the placement.

As noted, the Laser Speed Light is aluminum with a steel-toothed insert. The teeth are aggressive and a bit longer than those on other screws. While I’ve heard that the juncture of the steel tip and the aluminum shaft creates a ridge that can impede placement, I never noticed this. I did notice that the aluminum hanger makes the screw slightly less top heavy than screws with a steel hanger, and as such it is less likely to fall out when you let go to begin spinning it in. The extendable/retractable handle gives you solid leverage and the hanger has enough outward play to often let you place the screw without chopping much, if any, ice—an advantage over the Black Diamond Express screws, which in my tests usually required some ice chopped away to provide hanger clearance.

Downside? The aluminum threads ding up easily.  Lazy cleaning—tapping the tube against anything hard—will bugger up the threads.

ABOUT THE RATING The Laser Speed Light earned four out of five stars, with one deduction for costing $20 more than similar all steel ice screws.

• One of the easiest screws to start and spin in.