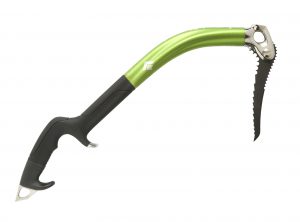 The Black Diamond Fusion is a retooled version of their former mixed and ice tool of the same name, and is heads and tails better. Notably, the new tool is four ounces lighter, five if you take off the removable spike, and has a stainless-steel head with an integrated hammer, rather than a modular head. The hammer, though small and quite awkward to use, is a nice touch, letting you tap start screws, place pitons and hammer a tool into the ice as a belay backup.

The Fusion has a removable and clippable spike. This you can punch into hard snow when you’re trudging up slopes, but you really use it to clip the rope to when the tool is buried overhead, providing confidence and security for setting screws. For modern (cave) mixed climbs, you can remove the spike, and remove the worry of stabbing your face when a tool blows.

Like most BD tools, the Fusion uses a one-bolt system to attach the pick. This design has been in use since 1989 and accepts any BD pick, including the Fusion (rock/mixed), the Laser (3 mm thick for ice) and the Titan (4 mm thick for greater durability.) In the field, the one-bolt system makes changing picks simple and fast, with no tiny nuts to drop and lose in the snow, although I did temporarily lose a side plate one cold morning.

For hooking, on rock or ice, the primary and secondary grips keep the pull on the pick constant. grab the secondary grip and the tool won’t shift on its placement.

Pick material is 4340 chromoly steel, and seemed to last longer than the 4130 steel picks I’ve used from other brands. For example, I dry tooled approximately 1,000 feet on a fresh set of Fusion picks before they really needed sharpening. Usually, with other tools, I have to sharpen the picks after every outing, or about every 500 feet of dry tooling.

The grip on the Fusion is ergonomic: A raised rib between the index and middle finger improves your grip and helps you direct the swing more accurately. The primary and secondary grips are both rubber coated so they won’t peel like tape will. Adding or removing nylon spacers on the butt of the primary grip adjust the grip to fit big hands and bulky gloves or small, bare hands or anything in between, but is a pain to adjust and it’s easy to lose the spacers. Both the primary and secondary grips have wide, comfortable pinky rests. I’d like to see the rubber extend all the way up the handle, rather than having to retro fit the upper shaft with grip tape. BD says they don’t rubberize the shaft because it would make the tool heavier. The aluminum shaft is shaped using a hydroforming process that makes the tool extremely stiff, so it won’t flex during radical torquing moves, and gives the tool its unique cobra-like shaft shape. I’m sure that hydroforming is a cool process, but the other tools I use, which have a traditional and smaller-diameter tube shaft, are just as stiff and are easier to grip when you choke up just below the head.

For hooking, on rock or ice, the primary and secondary grips keep the pull on the pick constant. grab the secondary grip and the tool won’t shift on its placement. On ice, I used the thin Laser pick and by the second outing had the swing dialed and was able to easily get good sticks even in sub-zero ice. For pillar ice where I might want a leashless tool, I’d choose the Fusion over the BD Cobra because the Fusion is the easier of the two to hold onto, and for modern mixed (largely dry tooling) it’s the new Fusion all the way. 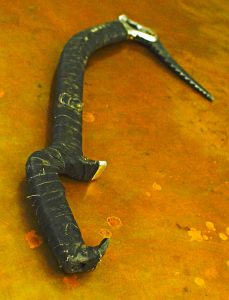 I like this tool, but deducted a star and gave it four instead of five because the grip isn’t as sticky as I’d like, and the  main pommel is slick and can skate when it is  pressed against the rock. There are time, too, when I wish for a third, higher pinky rest, such as the one on the Petzl Ergo.