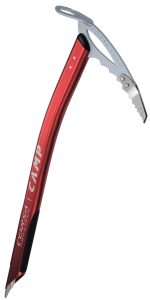 The all-aluminum Corsa (7 ounces) is the lightest ice axe made. Now, for a few ounces more, you can get the Corsa with Sandvik Nanoflex stainless-steel reinforcements on the pick and spike. Nanoflex is a proprietary stainless steel that, according to Sandvik, is corrosion proof, and lighter and stronger than both carbon steel and titanium. According to CAMP, Nanoflex is 60 percent stronger than carbon steel, so they can use less metal per product to achieve the same or greater strength.

The Corsa Nanotech is B-rated by the CE, a designation for a non-technical tool that you’d use for snow mountaineering, glacier travel and ski touring®in other words, activities where you need a cane to lean on when you get winded. (T-rated tools are for technical applications, such as waterfall ice. Yes!) The Nanoflex spike and pick are riveted onto the Corsa and are meant to add durability and performance. At first, they looked fragile and I wondered if the rivets would blow apart as soon as I sunk the hybrid pick in some real technical water ice. To find out, I took the axe to a local WI 4 waterfall, reasoning that if it could stand up to hard ice, it could easily dispatch the odd ice step or runnel up in the higher peaks, notorious nemeses for aluminum ice axes. Really, though, this is a tool for snow and neve, for times when you need an occasional axe for balance and self arresting, rather than technical climbing.

The slightly bent shaft and curved pick give the tool a natural swing that rivaled some technical water-ice tools. Though careful to clean placements up and down, rather than torquing sideways, I didn’t break the Corsa Nanotech and it even climbed hard (sub-zero) ice up to 70-degrees steep quite well. Patches of grip tape just above the spike provided a solid grip, even on the steeper sections. The Nanoflex pick has an aggressive, nearly barbed tip and row of aggressive teeth that bit into delicate ice and didn’t bend over when I accidentally drove it into the underlying granite (to compare, during testing of a steel-headed piolet on the same route, the steel piolet did bend over.) That said, the tool is so light you can’t really slam it into ice; rather, each placement requires several light pecks to seat the pick. The harder the ice, the more pecks required.

This is a tool for snow and neve, for times when you need an occasional axe for balance and self arresting, rather than technical climbing.

The oval-shaped aluminum adze was the tool’s only real disappointment. It doesn’t chop ice well, or at all, is too small for a snow scoop, and is really nothing more than a palm rest for holding the axe in the classic piolet canne position. Perhaps a Nanoflex adze is in store for next year’s model. Also, the hollow shaft lacks an end plug. Plunge the shaft into a slope and it can pack with an ounce or so of snow. I did like how the Nanoflex spike, which comes to a nice point, makes it easier to shove the shaft into hard snow.

The Corsa Nanotech comes with a sliding leash that makes it easy to go from holding the axe in self-arrest position to technical ice-climbing mode. (The radical, positive-clearance pick could deliver an abrupt jerk while self-arresting on ice. Practice!)

A rubber gasket prevents the leash from sliding off the shaft®the system is simple, light, easy to adjust and strong enough to occasionally hold body weight, although you’d never want to rely on it as an actual anchor point or as a wrist leash for steep ice.

I used the Corsa Nanotech on water ice, but don’t try that at home. Instead, pack the Corsa for more gentle outings. Mount Hood, Rainier, Mount Washington, many Colorado 14ers, the volcanos down in Mex and even the West Butt of Denali come to mind as legit venues for this superlight tool with a technical twist.

I gave this tool four of five stars, deducting one star because while the tool is lightweight, it costs twice as much as other tools for similar use.