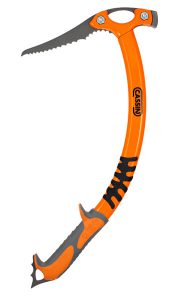 Whoever said that a “poor craftsman blames his tools” must have tried Silver Surfer (M9), a thin ice route Jefe and I got spanked on last winter, only eventually succeeding to pull the crux, where the smear was at best a quarter of an inch thick. Soon after the line went down, Jesse Mattner from CAMP/Cassin over in Boulder heard about it, and we of course encouraged him to drive over for an old fashioned thumping, of the sort we’d just taken.

When Jesse showed up with a pair of conventional looking ice axes, the Cassin X-All Mountain, I actually feared for his life, and grabbed a video camera to capture the bleeding that was about to unfold.

Once I was in position on the rap rope and had the video rolling, I gave Jesse the thumbs up. A cold north wind shot-peened Jesse with grapnel. Tendrils of spindrift burned his eyes. I squinted through the viewfinder, and watched nervously as he climbed, and climbed. He hardly paused at the crux that Jefe and I were maybe 50 percent on—and we had used the very best technical mixed tools available.

Jesse walked the route and loaned us his tools for a burn. They took at least a grade off the route and when Jesse let us keep them for the rest of the winter we cruised, no falls, a thin-ice project that we had been unable to do with our entire quiver of other tools.

The X-All Mountain is the finest thin-ice tool I have used, and one of the top all-around ice tools. The secret to the X-All’s performance is its needle-like pick, light swing and curved (not bent), shaft. All work in harmony to minimize ice fracturing. The picks are so easy to set, in fact, that you are apt to bury them in fat ice, making cleaning difficult. As I learned, the X-All requires a lighter, finer touch than other tools.

The X-All Mountain is the finest thin-ice tool I have used, and one of the top all-around ice tools.

I used the leashless X-Dry grip, which has a finger rest on the pommel, a higher rest for choking up, and no spike, but for $15 you can switch the grip to a more traditional alpine spike that’s clip-able and has only a small finger shelf, or a grip in-between the two. The X-Dry grip isn’t as easy to hold on overhanging terrain as the larger, more aggressive handles on the Petzl Nomic or the Black Diamond Fusion, but bear in mind that the X-All is called “Mountain” for a reason: It is for alpine and waterfall ice, rather than figure-fouring out a rock cave.

I gave the tool four our of five stars, and nearly awarded it five, but held back because the pick is just too sticky in good ice.

• Accepts leashes, available for $18 each.