Dry-tooling out sick caves grabs headlines, but the cold fact is that most climbers still only climb ice and still need ice tools. The Cassin X-Dream, which I used all last winter, hasn’t forgotten the ice climber.

There are so many things to recommend about the X-Dream that I can’t cover them all, but these highlights will give you the big picture: 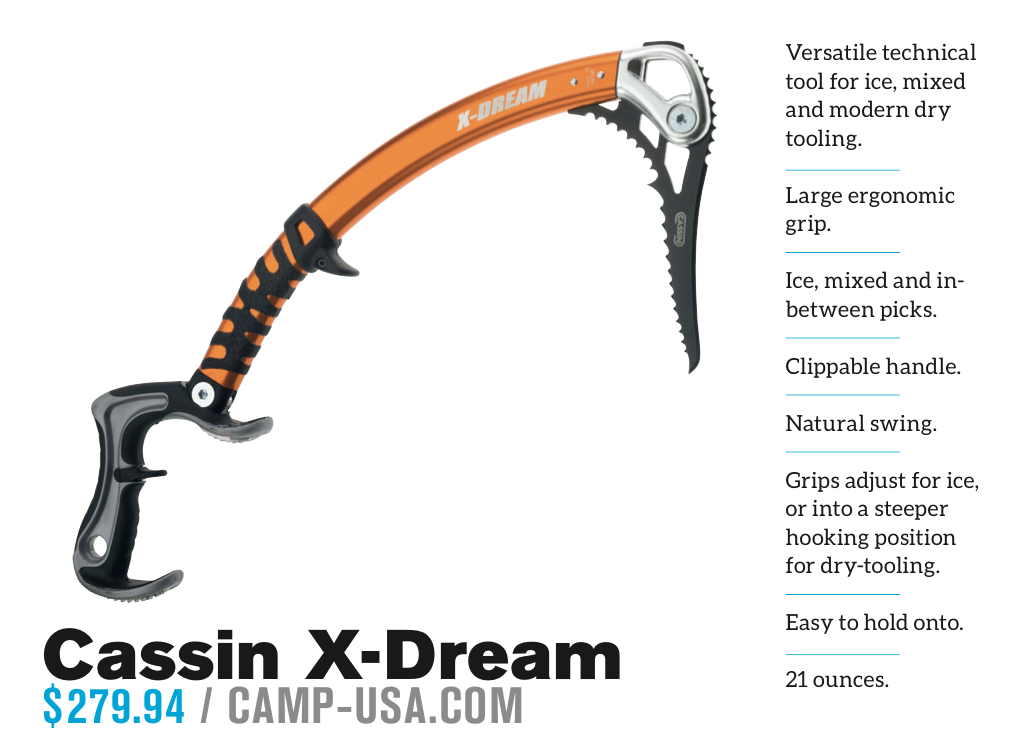 Swing/balance.
The X-Dream feels light, although at 21 ounces it is about the same weight as the Nomic and Ergo. Its shaft curves in a consistent, gentle arc, rather than hooking sharply as do many technical tools. This yields a natural swing that’s nearly identical to that of the Cassin X-All Mountain, one of the more precision pure-ice tools in today’s field. Combined with the set-back grip (next), the shaft curve gives the X-Dream the handling of a more-radically curved tool.

Grip. The X-Dream’s grip may be the one feature that most sets it apart from other tools. The grip is large, deep, easy to hold and the pommel is comfortable even when you have your full weight on it.

The cavernous grip accommodates thick gloves, and if you prefer a larger trigger-finger rest, the smaller stock one replaces with a larger rest ($6). For dry toolers, or people who want more hooking action even on ice, the grip loosens with one bolt and pivots into a “Dry” position.

The X-Dream also has options for choking up or matching. A secondary grip above the main grip has a large rest, and a higher, smaller, tertiary rest adjusts up or down, giving you a hold right below the head if you wish, a feature I dig as it lets me reach a foot higher without having to get stronger.

Finally, a small carabiner hole lets you clip the tool to back up a belay, or tether yourself to it for a self belay while you place an ice screw.

Picks. You get a Mixte pick with the tool, and have the option of the Race ($40) for rock, and Ice ($45). The three picks have the same aggressive, talon-like first tooth that will bite onto nearly nothing, and are thinner than most picks. That latter point can’t be overstated, giving this tool an advantage over others for really thin or really cold ice, or both at the same time.

Out of the box, the factory grind on the Mixte pick was as if I had done it myself—no modifications required. A slight bump on the back of the picks
serves as a very thin hammer head, useful, if barely, for hammer starting a screw or using one tool to tap in the other.

The picks are fixed in the head with a single aluminum bolt. These were torqued so tightly at the factory that they stripped when I tried to unscrew them, and I had to drill them out. Harder aluminum replacement bolts can be had at good hardware store, and put the problem in the rearview mirror as long as you don’t over tighten the bolts.

With all of its permutations, the X-Dream is the Swiss-Army knife of tools. It climbs ice. It dry tools. And everything in between.

This article originally appeared in Rock and Ice issue 240 (February 2017).