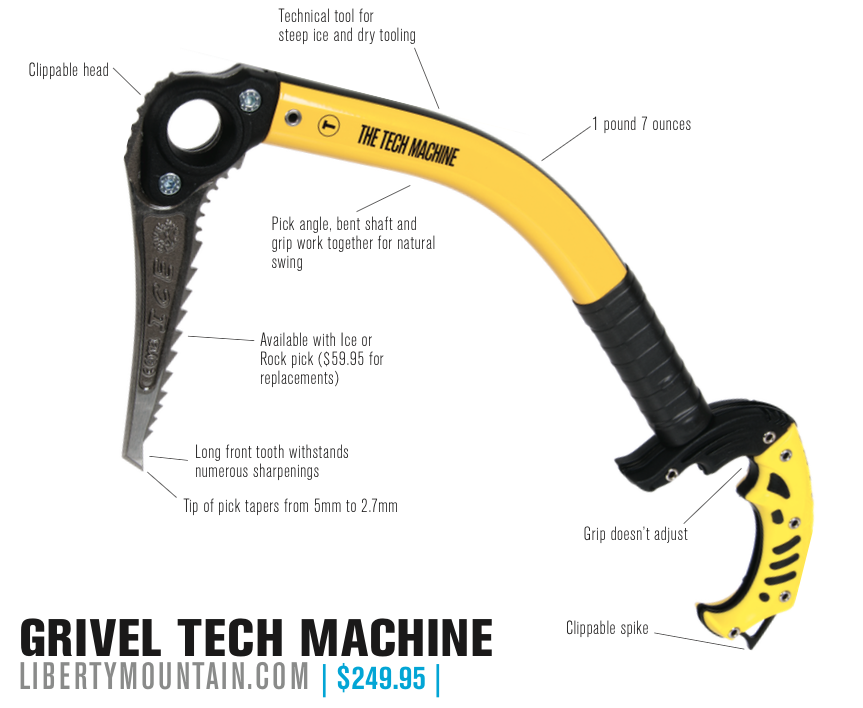 The Italian company Grivel began forging farm tools in 1818. By the mid-1880s, knickered alpinists leading their hounds and bent on having a go at the surrounding Alps, including the nearby white monster of Monte Bianco, began strolling into the shop. Might a smithy there improve on the pickaxe for their climbing?

Some 150 years later, Grivel continues to tinker with ice tools. Its latest, the Tech Machine, would be unrecognizable to the meerschaumed climber accustomed to wielding an ash- shafted, straight-picked ice axe. The Tech Machine remains hot forged, but the similarities drop off a serac after that. As you can see in the picture, the Tech Machine has a steeply bent shaft and an ergonomic grip. It’s meant for technical dry tooling and ice climbing.

The tool was indeed great on ice: snappy and solid, with a natural swing.

The secret of the Tech Machine’s success is … well, if I knew, it wouldn’t be a secret. My best guess is that the excellent performance involves the
harmonious combination of the pick, which tapers from a meaty 5mm down to a whisker-thin 2.7mm at the tip (for the ice pick, the thinnest on the market), to the curved shaft and grip. The sum of the parts is easy to swing, clears ice bulges and doesn’t kick itself off rock holds. In its class, the tool feels similar to the Petzl Nomic (1 pound 5 ounces without head weights) and the BD Fusion (1 pound 7 ounces). The aluminum-headed Tech Machine is 1 pound 7 ounces and has a large Cyclops eye that is easy to clip or rack.

The grip is ergonomic and has a hard plastic cover with sticky rubber where your hand rests, although in horizontal mode—when you’re sticking the tool in a horizontal crack, for instance—there isn’t so much sticky surface, and the grip feels slick. The grip isn’t adjustable—my biggest peeve with this tool—and was a bit too large for my hand when I was wearing a thin glove, though just right with a medium to thick glove. There is a clippable spike, which I like because I clip the rope to it for overhead pro when placing screws.

The aluminum shaft is rigid vertically, but in horizontal torques its flexes, and that takes getting used to.

Since the pick largely determines how a tool performs, let’s go there. You can get the Ice or Rock pick. I used the Ice for equal amounts of ice and rock. The Ice pick has a long front tooth that isn’t sticky. It was easy to clean from the ice even without file modification, and it held up well when it hit rock. The Ice pick has teeth on the top, by the head, for steinpulling—an unusual and welcome feature for an ice pick. Replacements are $59.95.

I did not use the Rock pick, which is angled more for dry tooling than ice climbing. The Rock pick can accept an adze or hammer (both are $49.95), but the Ice pick can’t, a shortcoming if you sometimes hammer-start dull screws, or place pins.