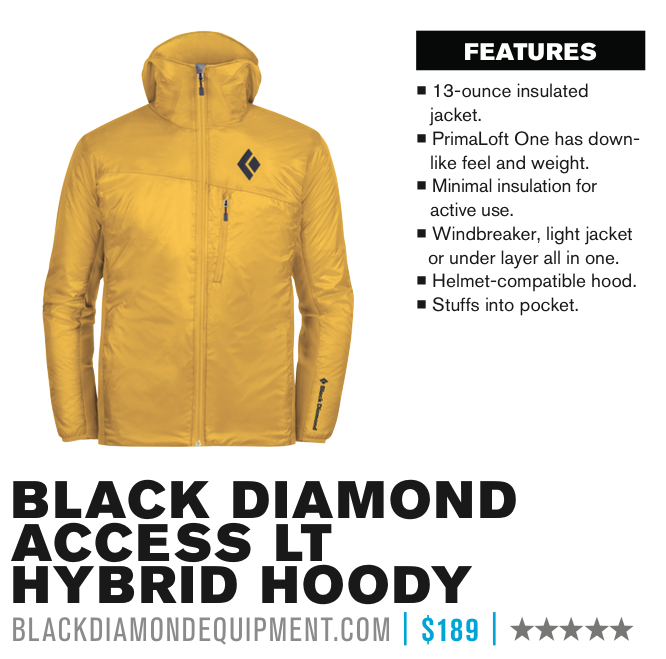 THE HYBRID HOODY is a 13-ounce active-wear jacket. It’s not so heavily insulated that you’ll sweat your chestnuts off while you’re climbing. Or
be warm at a frigid wintry belay.

The Hoody is insulated with a thin layer of PrimaLoft One, an ultrafine microfiber that is “as warm, soft and lightweight as down,” according to the tag
inside the jacket. That’s probably no BS—the first time I wore the Hybrid, I actually thought it was down insulated.

The PrimaLoft One extends through the hood, but not under the arms and down the sides, where you get Schoeller NanoSphere, a softshell fabric that, according to Schoeller, mimics the rough surface of a lotus leaf, with zillions of little hills. Water, rather than stick to the hills, runs off.

Good to know, but the absence of insulation lets you vent heat from the furnace of your underarms, forearms and sides. I wore the Hybrid rock climbing throughout autumn, and leading ice in winter in temps down into the low teens. While moving, I was never hot nor cold. I call this the “Goldilocks effect.”

Standing around in the cold for longer than a few minutes was another matter. Then, I donned a puffy.

The outer shell is Pertex Quantum, a light and tough windproof nylon. I liked it because ice chips didn’t stick to it.

Cut is athletically trim, and the hood fits over a helmet and cinches well around even a small, balding head. Visibility is good. A neck lining of something like velvet feels nice when you’re stressing.

Black Diamond gave the Hybrid an exterior, zippered chest pocket and an interior stash pocket, but no place to tuck your hands, at least on my model. BD does say that the newer version of the jacket has two zippered hand pockets. I haven’t seen these, but would welcome the addition.

Also to my liking is the Hybrid’s versatility. It works as a wind shell, an outer layer for moving or an inner layer under a more insulated jacket. You can, in fact, wear the Hybrid just about any time except mid-summer.

ABOUT THE RATING: Highest rating due to jacket’s versatility, high-tech materials a German Engineered and competitive price.