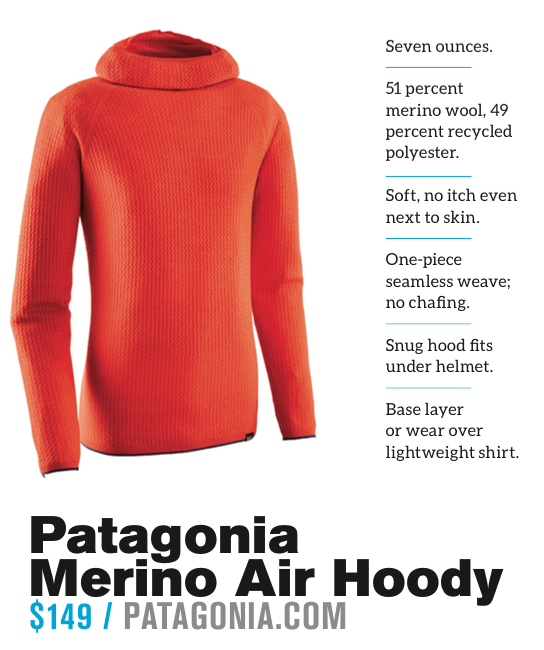 Anything wool makes me feel as if thousands of creepy crawlies are scuttling across my body in search of their next meal.

Surprise. When I slipped on the Patagonia Merino Air Hoody—a wool pull over—I basked in its softness. No itchies.

The Merino Air was so itch-free, and as I soon learned, so versatile, I wore it just about every time I climbed for well over a year, in all conditions and temperatures, and for both sport and ice climbing. I used the Air as a base layer as suggested, but preferred it as a second layer on top of a T-shirt so I could take it off if temps got too warm, or add it when temps dropped. Sometimes I wore the Air Hoody for weeks without washing it, and it didn’t raise a stink, or at least none of my climbing partners complained.

In colder weather, I pulled up the form-fitting hood and used it instead of a stocking cap—one less thing to carry. When ice climbing, I popped a helmet over the hood with no bother.

The hoody, incorporating a blend of 51 percent Merino wool and 49 percent recycled polyester, breathes so well during high-output activities such as breaking trail or punching up talus to the crag, it is almost as if you don’t have it on.

Another surprise is the seven-ounce Hoody’s warmth-to-weight ratio. The Hoody insulates better than any other light to mid-weight base layer I’ve worn. This I attribute to its springy, high-loft weave.

The form fit of the Air Hoody gives new meaning to the old saying “It’s what’s inside that counts.” When my wife first saw me in the Hoody she said I looked like a citizen of Whoville—every bodily imperfection shows. Get past the visual. The Air Hoody is all about performance.

This article originally appeared in Rock and Ice issue 240 (February 2017).