Jackson Marvell’s faded “NWS” tattoo is magnetic; it’s located on his overly calloused thumb, forged of stick-and-poke origin. The tattoo is an abbreviation of three short, yet powerful words that would become a mantra for him: “No. Weak. Shit.”

And it was his No Weak Shit tattoo that led Jackson to embark on a dizzyingly-large objective: to climb 100 towers before his 21st Birthday.

I had sand pouring down my mouth as I tried desperately to hand stack my way up an off-width tower in Arches National Park. This was tower number #86 on the tick list. Jackson yelled down to me, “Do you need any off-width advice?!” as my growing struggle became apparent in the #5-#6 section of the crack. He quickly threw out the beta of “Stick your knee in the crack, and wrap your foot around the outside of it.” My arm pump ceased almost instantly as I realized this was a no-hands rest. I climbed through the rest of the crux, then we summited the tower and gazed around at the desolate landscape. I delved deeper into the “NWS” state of mind that Jackson subsisted by. “No Weak Shit” meant to simply go try something—not necessarily to make rash decisions, but to stop using excuses and get after it. I think we can all grow complacent and this was a reiteration of attempting things that you perhaps wouldn’t have imagined sending.

That was just one of the hundred towers that Mr. Marvell summited that year, sometimes ticking off six sandstone towers per day. For example, Jackson bagged all the Bridger Jack towers—an impressive and mighty skyline in the heart of Indian Creek—in a day.

One thing climbing does is connect the past to the future generations of the sport. One of Jackson’s climbing mentors out of Provo, Utah, was Scott Adamson, the originator of the “No Weak Shit” catchphrase. Jackson grew up a few blocks from Scott and as his adoration for climbing grew, so did his admiration of Scott, who became his climbing guru. Jackson describes Scott Adamson as a “good human,” who was nice to everyone and inclusive of fledgling, young climbers. The two would eventually put up new climbs around the San Rafael Swell and tick off desert towers across Utah together.

I glared down at the eccentric shaped rocks and realized that this was a love, obsession, and a never-ending quest for Jackson. A life-long pursuit of that feeling one cannot simply describe. When climbing towers, you’re guaranteed a brutally steep approach to a potential mud-pile experience. No weak mentalities can subsist in desert climbing. For Thanksgiving last year, Jackson and friends hauled a keg of New Belgium beer up to the top of Bottleneck Tower. Scott Adamson had always talked about doing that, so Jackson amplified this to reality to pay homage. Scott Adamson died in 2016 while attempting a new route on the Ogre II in the Karakoram Range, Pakistan, with his partner Kyle Dempster, who also perished on the expedition.

All the while, Jackson continued his quest to climb the towers Scott prized so greatly.

On a separate climbing trip: Coming down from Washer Woman tower in the Island of the Sky zone of Canyonlands, Jackson and I stopped to watch the blazing sunset over the desert landscape. I remember Jackson saying as we watched the sky change from purple to pink to red, “The Desert is so quiet it’s deafening.” I felt it, the hyper-sensory experience so profound that it washes over you with an eerie calm. Climbing desert towers is not just about the send; Jackson was seeking comprehensive Adventure. One of the most memorable towers Jackson recalls is the Bride Tower in Moab. Scott snagged the first free ascent while Jackson on-sighted it a few years later.

Overall, a tower climber has to embrace a light-hearted sense of humor and a myriad of techniques to excel. Pushing oneself to a place that is so mentally liberating, it is enlightening. Jackson is a patient and humble crusher, even when the climbing quality is shitty. Another pivotal partner in Jackson’s tower quest was Angela VanWiemeersch, long-time companion of Scott Adamson and ice-climber extraordinaire. Angela says NWS is “more or less a reminder to push yourself and do your best, dig a little deeper to reach your potential.”

For Jackson’s 100th tower, Angela and he set out to put up a new route on a tower that Scott and Jackson had found together. Angela rehashes the escapade; “I lead the first pitch then Jackson set off to climb the second with a drill attached to his harness. He had to do a big step over from the main buttress to the tower proper and he was going to slam in a bolt there; when he fumbled the drill and dropped it some 50 feet to the base of the tower. We thought our day is over. Then, we got the drill back and it still worked! We were so excited and thought we could climb onward, but then we found out the bit was bent. We got shut down with 99 towers under his belt, on a super cold day in December. Plus, I had 100 PBRs waiting in the truck hidden. Even though Jackson’s stoke was sub-marginal at this point I was quite determined to have him climb his 100th, I needed to be there for it! So we found an alternative tower nearby, Jackson and I sized up the crack and we realized we didn’t even have the right rack for the tower. It was an off-width and the biggest piece we had was a number 3. So, off he blasted with no pro. He groveled his way up, head deep in the crack. His feet were flailing as if he were swimming. I was just freezing my ass off belaying him while laughing pretty hard as he grunted his way off the pile of choss. I joined him on top and we took a swig of the flask shivering, peering at the visible moon in the sky above us. It wasn’t until we were back at the truck did I bust out the 100 cans of PBRs. Things don’t always go the way we plan, but all that matters in the end is that you’re smiling and with your best homies.” The final tower solidified another first free ascent of Hermit’s Hovel – Mystery Incident, San Rafael Swell.

There is a party in the desert that Scott, his brother, and close friends have held every year since they were young. They call it the NWS party. People gather from all over to dance, drink and climb hard. Traditionally it’s been held in Castle Valley, but now the party moves around to different desert destinations.

Angela remembers her first time attending the party; “I had never crack climbed before (only ice climbed) and that first year, where I met Scott he took me to the party to show me the ways. It was my birthday; I had bought my first truck that same day, hastily insured it, then headed towards Moab. I didn’t have much experience on the dirt roads at this point so Scott made it a point to load up my truck with climbers and it was my duty to navigate the rowdy road up the wash to the base of the tower. “NWS!” Hhe would say over the sound of Metallica blaring from the little white Nissan.  My first desert tower. My first desert party. My first Crack climb. Scott could have sent me up the North Chimney route for my first crack climb, but he decided my first tower would go down in style, and we would climb the 5.11 route up the North Face. “NWS,” he would say from above, as I groveled slowly up the wide number 3 crack. It was trying for me, and when I got to the top I remember being so stoked and so proud when I looked up at him. I had gobies all over my hands and a big ol’ gobie on my shoulder from dragging myself up the corner system. He looked at me and gave me a swift pat on my shoulder, hitting my fresh gobie and having a good laugh. We partied on top with the best of friends and I will never forget that day. It was a beautiful day. The NWS mantra was all why we were there. Just a little extra something to live by.”

Jackson became one of the youngest climbers to summit 100 towers at 21 years old.  A handful of those towers were first free ascents. Worth a mention is his free ascent of Maverick Tower, with a consensus of 5.13a, otherwise a C2 aid route. Jackson also said, since Scott passed NWS is about making the right decisions. To wrangle the 100 tower’s, Jackson burnt through two Tacoma trucks, drove 27,500 miles, spent $3,437 in gas and climbed 29,160 vertical feet. He completed the undertaking on Dec 7, 2016.

Encompassing the No Weak Shit mantra and keeping the stoke alive was just one way Scott Adamson expressed his love of climbing. Angela and Jackson grasp onto his same ideals tightly; they devote their lives to pushing the limits of what a climber can accomplish on the wall. No Weak Shit is one thing in life you can’t mess up: have a goal and try to achieve it, even if it seems unattainable.

To see what these two are up to next, you can follow Angela VanWiemeersch on her bike-packing and climbing trip across country or Jackson Marvell’s upcoming journey to Pakistan to scope out some new lines. 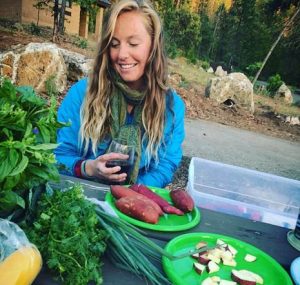 Suzy Williams is from upstate New York, where she later attended school for art. Growing up near the Adirondacks, she developed a love for wild and untamed forests adjacent to steep cliffs of granite. Her favorite places to climb are the Wind River Range, Wyoming, and Chefchaouen, Morocco. She studied art in school.

Life And Death In The Karakoram: Climbing Latok I And Ogre II