Editor’s Note: Fred Beckey, one of the most influential climbers of all time and the original American Dirtbag, passed away on October 30, 2017 in Seattle, Washington at age 94.

Joe Josephson phoned with an interesting proposal: Fred Beckey had come to town for a reunion of Montana’s Dirty Sox Club, a guild of Montana climbers from the 1960s through the 1980s with such piquant nicknames as Dougald, Dog Fuck, Mizner the Terrible, Java Man, Emerfuckingson, Brio B.O., Dr. Z and Rat Hole. If anyone has earned an honorary membership in a group named Dirty Sox it is Washington’s Fred Beckey, sovereign of American DirtBag Climbers. 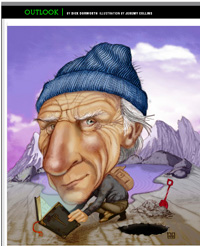 At the reunion at Davy Garbanzo Vaughan’s place, five bands played all day, while the hosts and 450 of their friends consumed 10 kegs of beer and two roasted pigs. Beckey, Joe said, had stayed over to recuperate and was bivouacked at the Vaughan homestead. He and Joe were going climbing the next day. Would I like to join them?

Sure. Why not? Fred is 84 and I seldom get to climb with someone older than I am.

Early on the morning of September 11, Joe picked me up, no more than 10 minutes behind schedule. Five minutes before we reached Davy’s house, Joe’s cell phone rang. It was Davy calling on Beckey’s behalf. Beckey was ready and wanted to know where we were.

Beckey’s many hundreds of first ascents were not accomplished by being patient with dawdlers.

A few minutes later we pulled into Davy’s driveway to be greeted by the peerless Friedrich Wolfgang Beckey. Fred looked and moved like an 84-year-old man with a bad back, bent at the waist as if leaning undeterred into 70 years of gale-force winds. His unkempt mane of graying but far from white hair made him look more like a physics professor than the world’s oldest, most prolific mountaineer. Fred greeted us with his trademark smile that could pass for a grimace, and the twinkling eyes of a fervent intelligence that misses little of what attracts its interest and collects less of what does not.

Soon Joe was driving us up Gallatin Canyon on U.S. Highway 191, the most dangerous highway in western America, to Gallatin Tower. Conversation skimmed in wide arcs across several topics, but Fred did not become the most inexhaustible climber in history by getting sidetracked. Mount Assiniboine was on his mind: Who could he get to climb it with him and what might the weather be? Joe had it on good authority that it had just snowed on Assiniboine.

I fucked up, Fred assured us. I really fucked up. Earlier in the season he’d had a partner (or partners), but the timing was wrong for Fred, who really fucked up and didn’t go. Maybe he should go to Tuolumne and do Lucky Streaks (5.10), and what did we think?

I said the weather in Tuolumne had a better chance of being good. I didn’t say that for Fred to have any chance of getting up either route would optimally require an experienced partner or partners 40 to 60 years his junior. Fred knows this better than I, but no one else his age is talking or even thinking about it. Most people are dead by the time they reach 84. Few of those still standing remain consumed by the passion of their childhood. Fred is the only one I know of who is still climbing, still on the road, still thinking of the next climb, still talking about women with the enthusiastic lustful libido of a wanderer in his 20s, still true to his original vision.

There is purity to Fred Beckey and his path in life.

We gained hints that Assiniboine and Lucky Streaks were candidates for the last four spots in his mysterious book to be about North America’s 100 best climbs. Joe is a publisher, and we tried to elicit information, but except for a couple of comments about various (one in particular) fucking publishers from Beckey’s fine literary past (two of his titles are Challenge of the North Cascades and Mount McKinley: Icy Crown of North America), we got nothing out of him.

Joe assured him that his information about conditions on Assiniboine was reliable, but Beckey brought up the topic at least 20 times. So, ya think Assiniboine is no good, eh?

No, it just snowed there, Joe repeated.

We reached the turnout and were quickly organized and on the short but steep 20-minute approach to the back side of the tower. With his forward lean and ski poles Fred appeared to walk more comfortably uphill than he did on the flats.

This is a really good trail, Fred observed. Must’ve taken a lot of work.

Joe was pleased. The trail was built by the Southwest Montana Climbers’ Coalition, of which Joe is secretary.

As we approached the tower, Fred noted, Looks like pretty good rock, eh?

Yes, it’s good, we both assured him.

Ten steps later he queried, So, ya think Assiniboine is no good, eh?

Tuolumne should be better, eh?

Joe, hoping to find out if Fred had a publisher in mind, began talking about the perils and rewards of owning his business. Fred didn’t say much. I picked up the conversation and commiserated with Joe.

Fred immediately responded, It’s not rocket science but it’s still work. He steered the conversation into the evils of work, which interferes with climbing, traveling and the other aspects of life. Fred Beckey did not become what he is by shirking the brutal labor required to get up his many climbs. Nor did he do so by embracing a traditional work ethic. Fred’s published books are the work of a meticulous, scholarly researcher. He was described by Neil Modie of the Seattle Post Intelligencer as erudite historian, geographer, explorer and author who happens to be a climbing bum.

We didn’t find out anything more about the 100 best climbs in North America.

We reached the base of Gallatin Tower and the three-pitch 5.6 route, and quickly harnessed, racked and roped up. Joe took the first pitch. We had been curious about how Fred would climb and were pleased to see that he climbs just fine, moving with more grace and assurance on vertical rock than he does on horizontal ground. His enjoyment was clear. Fred is walking, talking, climbing and grimacing proof of the existential dictum often attributed to Jean Paul Sartre: It’s not what you can’t do anymore; it’s what you can do now.

I took the second lead on pretty good rock and pretty spotty protection. Fred, who did not reach the age of 84 by being comfortable with spotty protection, watched closely, asking, Got any gear up there?

I was amused, informed and gratified that Fred paid attention to every detail of the climb. Fred Beckey gives us great hope that the aging process need not negate the significance, the meaning or the present moment in action of the physical life.

The second pitch ended at a small ledge 15 feet below a huge one at the base of the third pitch. Fred led this section between ledges with an aggressive clan unavailable to any other 84-year-old in the history of climbing.

As we were getting ready for the last and hardest pitch, Fred asked again about Assiniboine.

I led this pitch, rated 5.6, but members of the Dirty Sox Club always practiced the murky art of the sandbag. The top of the tower offers a beautiful view of the canyon. It was a crisp, clear day and a pleasure to be where we were, doing what we were doing.

Fred cruised the last pitch, gnarled old hands grasping a hold in just the right way, and we sat on top taking in the sights, the Gallatin River, the canyon, the climbs across the river, the highway with its snarl of trucks and automobiles and frustrated drivers. We talked about the world and about American politics as viewed from the top of Gallatin Tower. Fred was born in Germany in 1923 and immigrated to America as a child. He has a long view, and a powerful scope with a magnification of at least 84X. He is disturbed, baffled, pissed off and alarmed by the war in Iraq and those people in high and low stations who brought it to the world.

We rappelled to the bottom for a late lunch. Fred’s was a five-day-old turkey sandwich that came from his girlfriend, who had gotten it from an airline that bungled her flight to Bozeman to meet Fred, but provided her with a free lunch. He offered part of it to us. It’s really good, he said, putting forward a worn white roll with white turkey and mayo.

We offered Fred another climb, but his back was sore. So we returned to the car and went back to Davy’s. We weren’t yet ready to call it a day and say goodbye, so Fred jumped in his Subaru wagon with the crunched-in front and we met a couple of miles down the road at Mama Mac’s, a favorite cafe, where Fred bought me carrot cake and coffee with a crisp $20 bill from his wallet. In a hundred years we won’t have any use for this stuff, he announced with a smile, plopping the bill on the counter. We might as well use it up while we can.

Fred picked up a small stack of Mama Mac’s business cards, which he will use as his own business cards by writing his pertinent information on the back, just one of Fred’s personal environmentally sensitive practices.

While we ate, Fred pulled out a well used Fed Ex envelope from which he extracted a printed description of a candidate for his 100 best climbs, one in Arizona I’d never heard about. We talked about climbing, the road, the new library in Bozeman where Fred wanted to do some research. And then Joe and I had to go. Fred announced he’d stay in Mama Mac’s a bit longer. He seemed to be pondering whether he was going to go to the library for research, back to Davy’s, to Assiniboine, to Tuolumne, to Seattle, or toward some other destination or peak along a road that in a hundred years will seem as exotic to those who read about it as the travels of Marco Polo are to us. Fred’s road is traveled in the spirit of Magellan, Stanley, Amundsen, Shackleton, Thesiger, Shipton, Tilman and David-Neel. Joe and I had more mundane duties to attend to.

Dick Dorworth lives in Ketchum, Idaho, and is the author of “Night Driving, Invention of the Wheel & Other Blues, a Memoir”. He organizes his life around climbing, skiing and writing