Voytek Kurtyka remains one of the greatest alpinists of all time. His visionary approach to climbing resulted in many renowned ascents, such as the complete Broad Peak traverse, the “night naked” speed climbs of Cho Oyu and Shishapangma and, above all, the alpine-style ascent of the West Face of Gasherbrum IV. Dubbed the “climb of the century,” his route on G IV, as of 2016, has yet to be repeated.

Art of Freedom: The Life and Climbs of Voytek Kurtyka, by Bernadette McDonald, is the profound and moving biography of one of the international climbing world’s most respected, complicated and reclusive mountaineers.

Excerpt from Art of Freedom: The Life and Climbs of Voytek Kurtyka

On July 12, at 3 p.m., they marched over to the base of the great West Face. Although their packs felt leaden with weight, they contained only their clothing, a double rope, a few pieces of climbing equipment, their sleeping bags, a bivouac sack, some food, fuel and a stove. The afternoon approach to the face took much longer than expected: four hours of trudging through deep snow. After setting up a bivouac close to the wall, they cooked until 10 p.m., and then, after only two hours of sleeping, they fired up the stove again at midnight. Deep in their own thoughts, they said little. The good weather held.

In the silver, pre-dawn hours of July 13, they crossed the bergschrund at the base of the wall and entered the couloir. “It looks like hell, deeply carved with black unknown ice canyons, “Voytek wrote. As dawn crept over them, they began to recognize the features of the gully that they had previously studied. They raced up, climbing unroped, each with 17 kilograms on his back.

Their first bivouac at the top of the couloir was, in retrospect, relatively restful. The following day offered them mixed terrain, as noted in Voytek’s
journal: “50 degrees, Grade IV, some mixed rock and ice, IV, IV, V.” On the night of June 14, they reached their second bivouac site, at around 7000 metres. Because of the protruding rocks on the tiny ledge, they were unable to use the bivouac sack, so they simply spread out their sleeping bags and tried to rest in sitting positions. Although uncomfortable, it was the only possible arrangement.

Voytek took over the next day, leading five of the six pitches. They were now on the luminous Shining Wall, where the difficulties fluctuated between Grades V and VI. The undulating waves of rock reflected the light in subdued milky hues, but the wall offered few cracks into which he could place protection. Their belays were often “psychological,” since both Robert and Voytek knew the pitons would never hold a fall. A distance of 40 metres between points of protection—almost a full ropelength—was common. Every movement had to be calculated and precise.

Each climber’s memories of a tense situation are often starkly different, depending on the individual’s perspective. Robert later wrote that he was concerned that Voytek was wasting time, obsessed with creating safe belay anchors and placing protection. Voytek remembered it differently. Although he was a careful and meticulous climber, Voytek was fully aware of the alarming yet necessary, runouts: “How beautiful, the horrifying long rope, swinging away!” While he feared each successive movement up into the unknown, Voytek refused to accept retreat. He climbed higher and higher, against all reason. Each time he overcame his fear there was a momentary feeling of exhilaration and gratitude. But then another obstacle appeared. Another demon. The climb had become a kind of psychological terrorism. His journal entry at the end of the day: “Bivouac 3 at 7200…Grade VI. Horrible bivy, again on spiky rocks that require levelling their unacceptable pointed beaks with a hammer.” But at least it was calm. No Karakoram wind tormented Voytek and Robert. After an uncomfortable night on their jagged bed, the situation intensified on July 16. They climbed only five pitches on compact marble that day, advancing a mere 100 metres up the face. Robert’s lead up a delicate30-metre A0 slab took three excruciating hours. The long, cold belays were as mind-numbing as the climbing was all-engrossing. Their bivouac at 7300 metres was simply a half-sitting perch on a snowy ledge. Voytek’s journal entry described the worsening situation: “Disaster. Hurricane. Notorious shortage of sleep. Blowing snow. Food is finishing. Chronic shortage of sun.”

The following day they managed ten pitches of climbing through mixed ground to around 7600 metres; again, the level of risk was extreme. The soft snow didn’t support their weight. Under the snow was rock, but they could neither see it nor place protection in it. The climbing felt awkward and unstable, and the belays were unreliable at best. Voytek described the terrain as the “trick of high mountains. Risky and bad belays. Almost no protection. Not enough food. Not much to drink.” They had been on the face for five days at this point and were running out of both supplies and strength. But the most exhausting part was the constant inner doubt they suffered as they second-guessed each decision, finding solutions to each problem and feeling momentary relief even as they sensed that another obstacle would surely soon confront them. The unknown—which had attracted them in the first place—now had to be managed by breaking it down into pieces, one step at a time, one pitch after the other.

On July 18 Robert and Voytek reached 7800 metres. They had arrived at the final slabs and snowfields leading to the summit, but by afternoon it began to snow in earnest. The snow continued throughout the night, building up around their bivouac sack and threatening to push them off their airy perch.
They no longer had food, and they were out of gas. That meant they couldn’t make more water. They could barely poke their heads out of the bivouac sack because of the blowing snow. They waited all the next day for the storm to break, but it persisted. The snow piled up around them at an alarming rate. Voytek wrote: “Snowstorm. Jail at 7800metres. No food and no liquid.” Retreat was out of the question, since they only had ten remaining pitons, not nearly enough to rappel down the face they had climbed. Their only option was to outlast the storm.

Sleep-deprived, hungry, thirsty, hypoxic and stressed, they drifted into a delirious state. It was at this point, in extremity, that both Robert and Voytek sensed something – an independent spirit on the mountain that, for Robert, grew more ominous and real with each snowflake. So real that they waited expectantly for some signal or action from their invisible “third man.” Robert began to blame their imaginary companion for having slowed them down on the face. As avalanches surged over them, nudging them, almost burying them, Robert became convinced that the third man was trying to push him off he ledge into oblivion.

It’s not unusual for an invisible person to appear in dire circumstances such as these, but in most cases the presence is helpful, giving suggestions and
support and companionship. When Stephen Venables was descending Everest after having climbed the Kangshung Face, he was forced to bivouac not far below the summit. He wasn’t alone, however. An imaginary old man kept him company throughout the night and on his exhausting descent the next day. Once Stephen and the old man reached the South Summit, they were met by an imaginary (and long-dead) Eric Shipton, who helped by warming Stephen’s hands. There are countless high-altitude examples of these wonderfully kind, unexplainable creatures, yet Robert’s third man was strangely malevolent.

Voytek, while acutely aware of their new partner, was preoccupied with carrying out odd experiments, such as pinching his thigh and wondering if the pain would disappear when he neared death. He relished the pain, for it confirmed that he was still alive. He was already imagining the distinct possibility of turning into a lifeless block of ice on the narrowing ledge slowly disappearing under drifts of snow.

Occasionally they would burrow out from one end of their bivouac sack to remove enough snow to avoid suffocation. As they shivered on their ledge, they considered their options. Again, thoughts of retreat were discussed then quickly abandoned. Going up was also out of the question in this storm. Waiting—the most agonizing option of all—remained he only feasible choice. Cold and hungry and so dreadfully thirsty, they waited. From time to time they reassured each other with little niceties.

“Are you feeling okay, Robert?”

Robert described it as a “fragile mood of hope.” Voytek recalled that he had never had so much “free time” on a climb. “We had two nights and a day up
there. We just sat. We had a stove, but the gas was finished, so we had nothing to do but think.” Time became warped, stretching and contracting at will. One hour was the same as one day. The darkness pushed down on them, coating their heaving lungs. It felt aggressive, as if it would swallow them.

Voytek’s thoughts drifted into dangerous territory. Death was something he had often mused about in the past, and now it seemed inevitable and barely worth worrying about. What was most important to him was to be fully aware of the experience. Being completely conscious of the process of dying, particularly in this remote and savage place, would be interesting.

As he pondered his own demise, Voytek became concerned about Robert. Was he also aware of how close they were to death in this terrible place, this wonderful place? It became incredibly important to him that Robert understand what was happening—that they share this almost sacred experience. But it was a delicate topic, and Voytek struggled with his decision to speak with Robert. Finally, he could no longer hold back. He began, his voice raspy with cold and fatigue, “Robert, I…I…I’d like to…”

Robert interrupted quietly but firmly in a painful whisper, “I know what you’re thinking. I’m ready. I’m prepared for this. Don’t worry.” 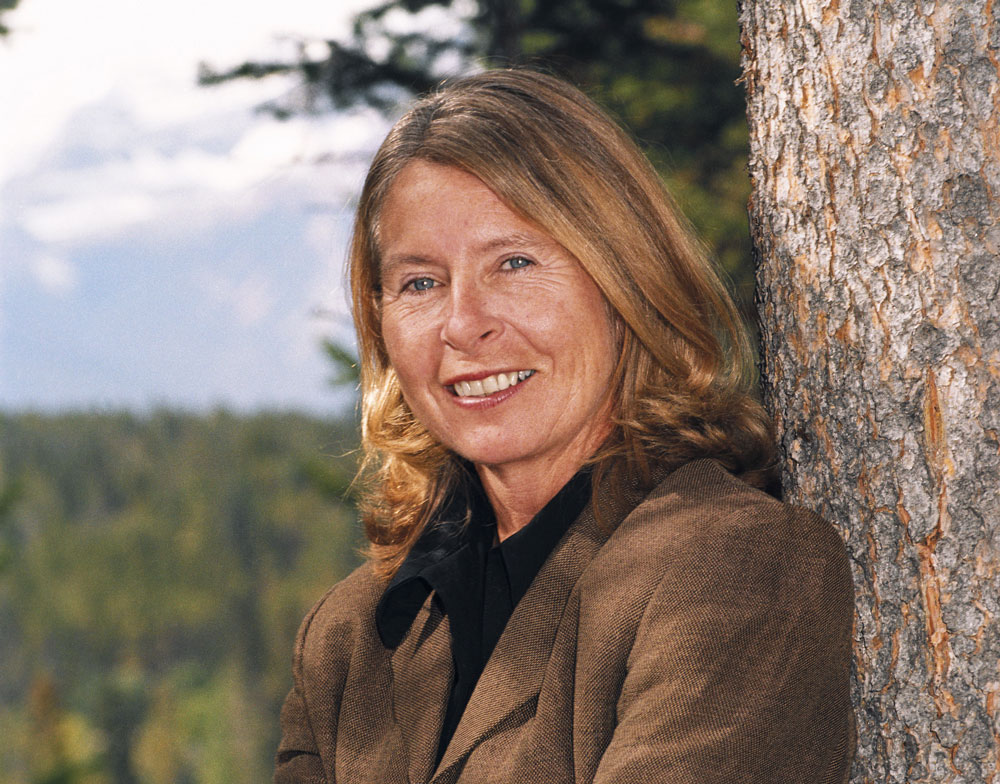 Bernadette splits her time between Banff, Alberta, and Naramata, British Columbia. “Art of Freedom” ($32.00) is published by Rocky Mountain Books. Available September 8, 2017, from online retailers, your local bookstore, or direct from the publisher at rmbooks.com. Pre-order today on amazon.com.