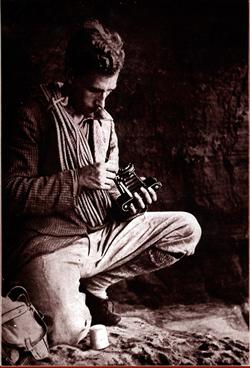 It was 1930, and Colin Kirkus searched intently for any way to reach the huge slab high on the 500-foot battlement of Clogwyn Du’r Arddu. His first obstacle was an overhang — a very big one, as he later noted in his memoir: it created a sort of covered corridor, with a roof that projected in places for 20 feet or more.

Dark and ancient, with soaring gray faces and aretes, Cloggy is high in the heart of Snowdonia, the mountain center of North Wales. North-facing, slow to dry, and home to historic runouts, it was at one point considered impossible to climb, and remains a treasury of hard, heady classics.

From the ground, Kirkus, the leading climber of his era, decided to break through the middle, where a pile of blocks created a weakness, and traverse leftwards along the edge. He hoped to gain a narrow slab that reared up to the skyline. Whatever lay after the slab, as he would write in Let’s Go Climbing, was impossible to guess.

On the exposed traverse, Kirkus hit a foothold too slick for his rubbers, so he took them off and continued in his socks. The traverse is Very Severe (5.7 or 5.8).

He reached a tiny grass ledge, and looked up at the narrow, difficult, rotten face, wondering what was coming. A hundred feet above the base, with the overhang below him, he was absolutely committed. He started up.

A thin ribbon of grass ran all the way out on the right, looking like a long and ragged caterpillar. I thought that even this might be safer than the rock and plunged into it. …[I]t began to peel off and slide down. I left this moving staircase very hurriedly, and took to the rocks again. I climbed on the extreme edge …. Below my left foot the rocks dropped, sheer and unclimbable, for 200 feet.

He ran out of his 120-foot line with no belay in sight, and his partner Graham MacPhee tied on another 100-foot rope.

Kirkus finally reached a thread belay: It was wonderful to think no one had ever been here before. It was still more interesting to wonder whether we should ever escape.

Kirkus’s climbs were the finest series of first ascents then seen on any cliff, Paul Williams wrote in the introduction to his guidebook Clogwyn Du’r Arddu, citing the Great Slab, described above; the Chimney Route (VS 4c / 5.8); the Direct Finish (HS 4b / 5.7) to the East Buttress; and five other major routes on Cloggy: all are but a part of the Kirkus legacy across Snowdonia.

Ben Moon of England, one of the world’s top climbers in the 1980s and 1990s (whose recent V13 boulder problems in Salt Lake City went unrepeated for two years), calls Colin Kirkus his climbing hero.

My grandfather was into climbing in the 1930s and had a massive mountaineering book collection, one of which was Kirkus’s classic Let’s Go Climbing, Moon says. As a 14-year-old I loved this book and read it over and over again.

Yet mention Kirkus to most American climbers, and they have no idea who he is.

Kirkus was known as unobtrusive and even gentle, but written accounts also celebrate him as a tremendous eater: he would finish his dinner and then the dinners of any and everyone else in a hut, and any scrap. He once unabashedly cooked up a hard, bluish fish he found left behind in a hut kitchen.

When Kirkus climbed, he tied in about 20 feet from the end of a hemp rope, and cut pieces to thread as protection along the way.

He fell more than once soloing, and his partners caught at least one fall midair with a rugby tackle.

One day Kirkus started soloing the unclimbed West Buttress of Craig Lloer, struggling with a crack and an overhang. Above, he thoughtlessly climbed halfway up a bulge, and made rather a grab for a high handhold, losing his footholds. He then hung on waning arms, with no holds above, unable to descend. I looked down and saw a sheer drop of nearly 200 feet below me, he would write. Then I got into a panic and made a sudden convulsive spring round the corner on the left, where my hand mercifully landed on a hold. The solo FA is today called Kirkus’s Route VS 5a (5.8).

Among his more successful solos were an exposed arete at VS 4c (5.7-5.8), a variation to the classic Grooved Arete on the mountain crag Tryfan. He climbed with the other visionaries of the era, including Menlove Edwards, Maurice Linnell and Alf Bridge.

Kirkus worked in an insurance office in Liverpool, and, according to his biographer Steve Dean in Hands of a Climber (The Ernest Press), secretly studied marked-up photos of Welsh cliffs in his desk drawers at work. Middle-class, never owning a car in his life, he often bicycled from Liverpool to Snowdonia, about 60 miles, to climb for a weekend. On at least one occasion he walked it.

In 1933 Kirkus and Charles Warren climbed Bhagarithi III (6,454 meters), in the Garhwal Himalaya, India. The two used only four porters, who stayed at basecamp, and they climbed alpine style, carrying all their equipment and moving swiftly on technical terrain. Their route culminated with an exposed, vertical corner topped by an overhang, led by Kirkus. Warren believed it the hardest climbing done at altitude to date.

Steve Dean says it is generally agreed that the climb never received the recognition it deserved. One of the reasons was the chaos of impending World War.

I met Charles [Warren] on two occasions in 1988 and he had very clear memories of it all, Dean e-mails from his home in Derbyshire, England. He climbed with Warren, whom he calls a great natural, floating strenuous VS in his latter 60s and completing long mountain days in his 70s. The overhang was thought to be about Alpine Grade 4 (British Severe, or 5.6). It is amazing that Kirkus led it at altitude in 1933.

I always wanted to do a route on Cloggy, though its reputation was unnerving, but lived in North Wales for five months without ever doing so. I peered across at it while hiking Mount Snowdon, and often inquired about it, but it was never dry.

It was only on an eventual third trip to Wales that, with Kath Pyke, I finally walked up the railroad track to Clogwyn Du’r Arddu. whose face we could not even see in the swirling mist.

We headed for the Chimney Route, 360 feet, VS (5.8), a 1931 Kirkus route. The five-pitch line starts almost in the center of the East Buttress, an obvious chimney just left of the vast Great Wall, on which Johnny Dawes scribed the mythical Indian Face, probably the world’s first E9, in 1986.

My friend Kath says today that she mostly remembers green and slime, and moss oozing. We groveled up the chimney, she recalls, and I later found moss in my chalkbag.

The fourth pitch, an 80-foot 4c, fell to me. Climb down right and step round the arete into a groove, the guidebook read. Go up this to a large flake. Traverse right and climb the steep and exposed wall on excellent holds.

I got stuck on that wall for I don’t know how long: wet, humbled, worrying about scant pro, and absolutely uncertain of where to go before finally finding the next facet.

Colin Kirkus survived three serious climbing accidents, including rockfall on Ben Nevis, Scotland, in which his party of four was swept 250 feet down, plummeting over a 40-foot ice wall. Parts of his account show the understated humor that limns much of his writing:

I think Alfred was the first to be hit. A large rock broke his arm, which he had put up to protect his head. He went down, but Dorothy held him. Then she too was hit and they were both swept down. …

I tried desperately to reach the little crevasse on the left. … I was swept down in the shooting stream of rocks.

I went head-first; it seems to be a habit of mine. …

Derrick must have arrived soon afterward to complete the party. He went plonk into a hole, so that only his head and shoulders were visible. He looked rather funny.

In another account, from Crib Goch, Kirkus describes seeing a friend lose control of a glissade, dropping his axe, but fortunately stopping in soft snow. I believe in keeping cool in an emergency — providing it is someone else’s emergency — so I asked him quite calmly what impulse prompted him to throw away his axe. His reply is best left to the imagination.

In 1934 Kirkus was on easy ground near the top of Ben Nevis when a snow step collapsed underfoot, and he shot off the hard ice underneath, pulling his dear friend Maurice Linnell from a probable ice-axe belay. Kirkus slid and bounced about 300 feet, and at some point woke from unconsciousness to seek Linnell, finding him 80 feet above, suspended on the other side of a ridge with the rope caught around his neck. Kirkus descended alone, passing in and out of consciousness, with a fractured skull, a concussion, serious damage to his right eye, and an injured jaw and leg.

At least one friend said Kirkus was never quite the same again, and Dean quotes a painful passage from Let’s Go Climbing as indirectly referencing the tragedy.

A fatal accident is a very terrible thing. Don’t think of yourself, but think of the effect on all your relations and friends if anything were to happen to you. Or think how you would feel if you had to meet the parents of a friend who had been killed while climbing with you.

Kirkus’ eye was always misaligned after his accident, a flaw that could have kept him out of the RAF as the World War flared. When he signed on, though, the line for the eyesight test was a long one, giving him time to memorize the chart.

He married in 1940, and that same year departed for the war, where he became one of the best navigators in his squadron. Kirkus and his crew disappeared on a dangerous Pathfinder Force mission over Bremen, Germany, in September 1942. He was 32.

His friend Alf Bridges wrote in a letter reproduced in Hands of a Climber, I am glad of the privilege that was mine, in being so close in friendship to a man whose qualities of courage, kindness and loyalty were of a noble standard.

[He was] the greatest climber of his generation, and possibly of all time.

Alison Osius is executive editor of Rock and Ice. She at one time worked for the Plas y Brenin British National Mountain Centre, in North Wales.