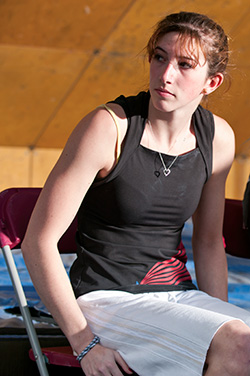 Francesca Metcalf sits on her bedroom floor for over an hour, fixated, clicking and forming the top layer of a Rubik’s Cube. A few days later she wakes up and finds the Rubik’s Cube in her bed. “It’s a little sad,” the Boston-area climber, who turned 18 in March, says, “how much time I’ve put into it.”

Metcalf is the first to call herself stubborn and competitive, especially with herself. “If you make something into a competition for me, from pull-ups to eating to watching TV, I will give 200 percent and not stop until I’ve won, or at least feel that I’ve done my absolute best.”

This time last year, women’s bouldering comps were generally Alex-v-Alex (Puccio and Johnson) shows, and they were highlights in American climbing; but no franchise lasts forever. And if you looked just out of the spotlight, the name of this rising star in the East kept clocking in just below the storied two. Last year, at 17, Francesca was third behind the Alexes at the ABS Nationals at Sportrock, Alexandria, Virginia, in February, and fourth behind them and the venerable Lisa Rands at the Earth Treks Roc Comp in Baltimore (part of the United Bouldering Championships Pro Tour) in April. In June she was the third American woman at the Bouldering World Cup at the Teva Games, Vail, Colorado, finishing 12th out of 37 women. Most recently, at the ABS Nationals at the Spot Bouldering Gym in Boulder in February, she ended up in second behind Alex Puccio. “I’m still in shock,” she said, adding, “I just love big comps like this. If nationals were every weekend, I would go to every one.”

A smooth and methodical, even patient, climber, Francesca makes hard moves look easy, so much that her falls seem sudden and surprising. Unfortunately, at Youth Nationals on the weekend after the ABS event, Francesca dynoed for the top, skipping a hold, fell, landed badly on a mat, and dislocated her ankle, putting her in a boot cast and on crutches. Still, she has kept up her training as possible, and will compete at the Teva Games World Cup the first weekend in June, after which she hopes to travel overseas for the World Championships in Arco, Italy.

Comps are Metcalf’s focus this year, but this fall she starts college at Georgia Tech, and expects to spend less time traveling and more time climbing outdoors; almost all her applications were to schools in the Southeast, for its great climbing and warm weather. Metcalf’s outdoor record at the moment is relatively thin, but includes her first V10, Ten Ten, and many V9’s including Glass Roof, both at Hueco. She is primarily a boulderer, but routes include two 5.13a’s at Rumney and one in Spain. One of a trio of climbing sisters, including Olivia, who turns 20 in June, and Amelia, 15, Francesca started climbing at 5 and competing at 8, with teams at the Boston Rock Gym and now Metro Rock. 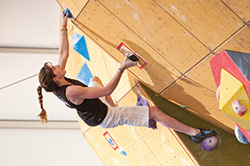 Where do you go to school?

A private, all-girls, Catholic school—Ursuline Academy. I have a uniform: a plaid skirt, white polo shirt and knee socks, but sadly the nuns get angry at us if we come to school looking like Britney Spears. A lot of people ask me how I deal with not having boys at my school or wearing the same thing every day, but truthfully, I love it. Not having boys or a choice in outfits are just two less things to stress about.

How has growing up climbing affected your teen years?

I’ve grown up with the climbing community as my second family and I’ve learned from them, about winning and losing, and caring for the environment. It is kind of disappointing to miss out on things that normal teenagers do. Then again, I’ve had so many more experiences than most people my age. I think I’ve been to 15 different countries for climbing. I’ve learned, “Win with grace and lose with grace.” When I was little I wasn’t always a great winner. Or a great loser either. We have a video, it’s kind of embarrassing: We’re standing in my hallway, my coach had just told me I could climb on the team, and I’m saying “Oh yeah, I’m the best climber, watch me climb this door frame,” and then I just fall on my face and get up and say, “Well, I’m still the best climber.”

Did climbing keep you on the straight and narrow?

I’ve never done any drugs at all, and I don’t want to. I’ve seen what kinds of things people get into and I value everything too much to go down that road. Beer? Not really. My parents are just really against alcohol. Even if it was just one beer, they would send me to AA [laughs].

Getting hurt at this last comp. That was not very fun, especially having to be carried out in a stretcher with an oxygen mask. They were really convinced I was going to go into shock or something.

Do you eat carefully to be thin?

[laughs] I try to eat well but it does not go well. At all. I’m a horrible eater. I gave up chocolate for Lent and it has been such a struggle, so horrible. I eat like at least a million calories a day.