Fred Beckey passed away on October 30th, 2017, at the Seattle home of his long-time friend and biographer, Megan Bond, where he had lived during the last months of his life. He was 94. 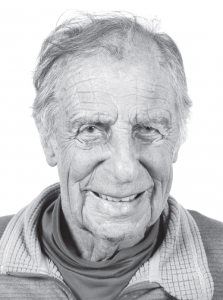 I’m pretty young compared to Jurassic time. I’d like to reinvent myself and get younger every year.

Traffic is becoming hostile in Seattle.

My parents taught me to be responsible, self sufficient, disciplined and punctual. It’s interesting that my parents were so involved in music and the arts—it didn’t rub off on me—but my brother Helmy did become an opera singer.

My parents took me to the mountains when I was a boy. I was visually influenced by their beauty—like Ruskin. Although the inland waters in the Pacific Northwest held their attractions, mountains, especially with winter snows, constantly drew my attention.

Alpine mountains captivated me. They also represented freedom and challenge, and the lure of mountain exploration caught my attention.

My first ascents of Mt. Deborah and Mt. Hunter [1954] with Henry Meybohm and Heinrich Harrer were a huge commitment. I learned to trust the judgment of my partners. I also learned about the dangers of cornices and to stay intensely alert around them.

I’ve learned a lot from numerous individuals and other climbers. In particular: Climb within your limits, never belay casually, pick the right partner and continually be aware of your route line and potential descent.

Pace yourself. Trust yourself. Keep going. Keep a good sense of humor.

Don’t be intimidated by the climb.

I don’t want to live on a diet of roadkill, but I’ve learned that good health and a vivacious, challenging life is far more important than money.

I’ve yet to have roadkill, but I’ve had trainkill in Alaska when a moose was hit. I’ve also had porcupine, bear, elk, goat, and ptarmigan.

But you still need a certain amount of funding to climb and ski and travel to destinations that are appealing.

I have made it to 92 living life on my own terms.

I’d like to be remembered for my audacity on Mt. Waddington along with my research, writings and explorations.

Many beginners do not practice belaying, especially with a deliberate leader fall. Tragic belaying accidents have resulted from carefree attitudes, inattention including the making of phone calls when belaying, lack of communication between the leader and belayer, and failure to tie a backup safety knot below the belay device.

When we went to Devils Thumb [1946, East Ridge first ascent], Bob Craig, Cliff Schmidtke and I were stuck in the tent for days, due to drenching rain and bad weather. Everything was soaked—our clothes, sleeping bags, everything. We were feeling quite despondent. We were cooking oatmeal on a tippy stove and it spilled onto everything, making the situation that much more miserable. We were pretty dejected.

Megan Bond [my editor] is harassing me to get onto the book about our journey to Lhotse. It will be a narrative of the 1955 International Himalayan Expedition. The images from that trip will tell most of the story.

No more big mountain books, the typing is tough on my eyesight. But I’d like to take another venture to the Himalaya real soon.

A Day in the Cascades with Fred Beckey

An Encounter with Fred – A Chapter in Continuing Dirtbag Education