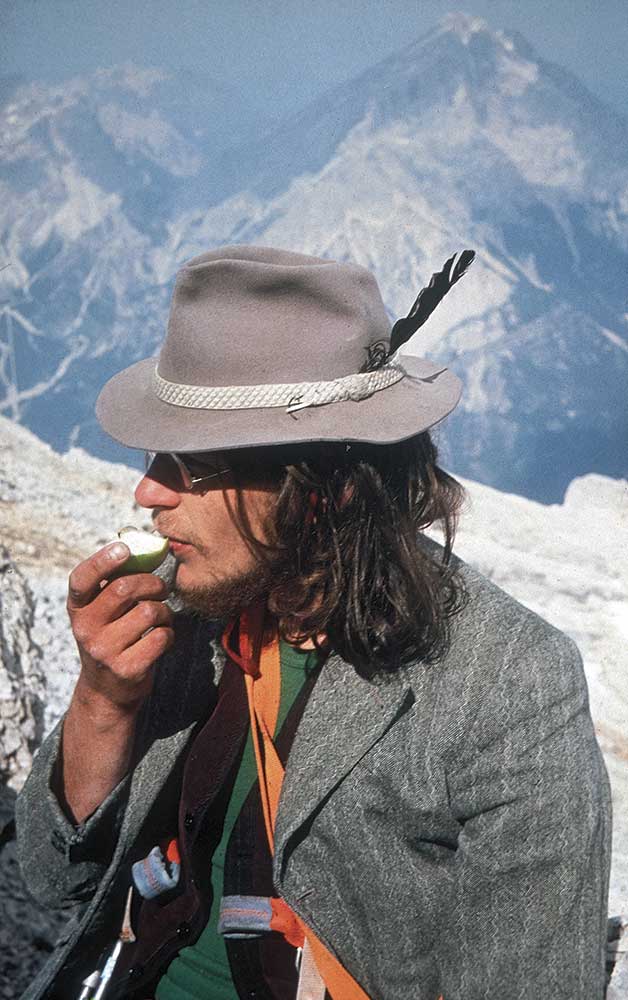 I come from a background of bad-ass trad climbing, where loose rock and poor protection were a daily routine. To say it was adventurous would be an understatement; maybe hazardous is more realistic.
Free climbing was the most valued style, but our mentality was different. In the past, it was more about searching for our limits far from protection,
than reaching the highest possible grade, free of risk.

In my early years, climbers gained attention by climbing well, but these days it’s the contrary, because nearly everybody climbs well.
In other words, in the past it was easy to be a hero, but now it’s easy to be less than ordinary.

When I started climbing, I didn’t have real mentors, but I had a hero: Mathias “Hias” Rebitsch. What I learned
from Rebitsch was basically “less (gear) is more.” His routes had a special status among insiders, and they clearly showed what a fantastic climber
he was.

I always believed that higher free-climbing standards would reduce the need for protection. Strangely enough,
it was the opposite. The use of bolts in the mountains once was an important subject of discussion, but today nobody gives a shit.

Mountain climbing evolved into lighter, faster and harder before I discovered sport climbing. I was part of the last generation that pursued a genuine development that had its roots in the Alps. Sport climbing came from a different culture and mindset. I embraced it immediately because it was a new and exciting challenge. I began losing interest in mountain climbing. It seemed a waste of time, because there was too much scrambling involved for only a few pitches of quality climbing.

I was one of the first sponsored climbers and have to admit that sometimes it’s difficult to resist “indecent proposals,” like abseil-demos on the storefront of a big sport shop in the center of Munich, or off a fifth-century tower in a historic Italian city, and even worse from a hot-air balloon in Cortina! But when it came to real climbing, I didn’t allow any influence from my sponsors and as soon as I sensed pressure, I decided to find different ways to make a living.

Climbers today should stand up and have the guts to be themselves and tell their sponsors to accept them the way they are or go to hell.

Like many climbers my age, I experienced the days of being “poor but free,” and I still believe that we lived
a better life than the richest people on the planet. Today’s mindset regarding climbing is the result of a different approach, which is about competition
and records. It has caused climbing to become a sport instead of a lifestyle. Climbers today should stand up and have the guts to be themselves and
tell their sponsors to accept them the way they are or go to hell.

Multi-layered ethics are a logical consequence of the freedom to practice climbing as individuals following personal beliefs and preferences. Some have style, others don’t, but that is still better than rules.

I never had a bigger picture in life.
I always enjoyed living spontaneously. In my very early years, climbing was everything, but later I discovered other interesting aspects in life,
like women, hang gliding and the freedom of not doing anything.

In the early 1980s, technical face climbing was the center of our universe, and performance climbing shoes played a really important role. We used EBs four sizes too small. Extreme suffering was part of the game. So I started thinking about how to make shoes less painful, but still high performance. The famous Mariacher was the first very successful result, and from there I focused mainly on sensitivity.