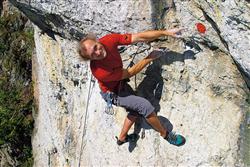 There are tales of Kurt Albert’s trips to India, China, Pakistan and Patagonia—among various other points on the globe. And I knew from the Frankenjura guidebook and a number of small red dots at the bases of cliffs that Albert had done literally hundreds of first ascents, including the first 5.13 in Germany. He was also rumored to be an excellent mathematician who used to win Rubix Cube contests.

When Kurt Albert rolled into Boulder for the final stop on a September tour of the States, it was (atypically, according to all who know him) on a somewhat depressed note. While he had enjoyed the climbing, and atmosphere of America, his good friend and housemate, Wolfgang Gullich had just died in a car crash in Germany and Albert was leaving shortly to attend to his friend’s affairs. He was philosophical about Gullich’s death, but had a hard time talking about their trips together. I didn’t push him on the subject when he agreed to meet me for a beer (on the ground!) and the following discussion took place.

WHAT WAS IT LIKE IN THE FRANKENJURA WHEN YOU STARTED CLIMBING THERE?

The first eight years I climbed, I only did aid or mixed climbs. There was no concept of free climbing in West Germany. There were these aid routes, and sometimes the pitons were distant, up to five meters or more from each other, and you had to do some free climbing between them. But if you saw a piton, you grabbed the carabiner or put a ladder on it. So there was no free climbing for the sake of free climbing.

When I was 18 I visited the Elbsandstein where they had already been doing hard free routes—5.10s were done in the 1920s! Climbing ther influenced me. Before, all I was doing was aid, and I could do every route. I realized that free climbing was what I wanted to do. Redpoint is actually an ascent where you go free from the beginning to the top in one push without resting.

WHEN DID THE NOTION OF THE REDPOINT START?

In about 1975 when I as 21, I wanted to indicate it was possible to climb a particular route free. I painted little red dots at the bases of the routes as a way to show this.

DID YOU PROTECT THESE CLIMBS FIRST ON LEAD OR RAPPEL?

There is a tradition in the Frankenjura that when you do a route, you leave all your gear in place so the pitons don’t’damage the rock. Because everything was there, all I had to do was clip the pitons of bolts as I free climbed. In just one weekend I was able to do 20 first free ascents!

WHAT WAS YOUR ROUTE ON THE TORRE CENTRAL DEL PAINE?

We called it Riders on the Storm. I did it with Wolfgang Gullich, Bernd Arnold, Norbert Batz and pPeter Dittrich.
==
WHAT ATTRACTED YOU TO PATAGONIA? IT’S A LONG WAY FROM FRANKENJURA.

Oh, I ‘m always looking for adventure when I climb. I like to do long routes and first ascents on the big mountains of the world. This was one of the biggest faces I had ever seen—aboue 1,300 meters. There was a lot of bad weather and it took us one and a half months to do the route but in the end we could free most of it, using aid on only four pitches.

WHAT DO YOU PLAN TO DO IN THE IMMEDIATE FUTURE?

I want to do much more traveling because it’s what I like to do the most, especially connected with climbing. I’d like to go to Africa, perhaps to Fitz Roy or Venezuela.

WHAT DID YOU THINK OF RIFLE LAST WEEKEND, AND IN THE STATES IN GENERAL?

It’s excellent! In the States I prefer the big landscapes, the desert like Joshua Tree. For me now it’s not a big challenge to go to Rifle, but it was fun.

In California I liked Sonora. I did a climb called Soap on a Rope and got so pumped. In the Frankenjura you don’t get so pumped. You just fall.

It’s quite the same style now in Europe and America. What I don’t like is the chiseling of routes. Now they do it in the States. They did it already a long time before, on classic climbs like Phoenix in Yosemite. But those are exceptions—now it’s not an exception to chisel a route.

BUT PEOPLE HAVE BEEN CHISELING ROUTES IN EUROPE FOR A LONG TIME, TOO.

Not in the Frankenjura. No chiseled routes there. There are some glue-reinforced handholds,.

WHY DO YOU THINK CHISELING IS POPULAR IN THE UNTIED STATES?

To make a route possible. Somebody wants to do a route and he can’t. Maybe he is afraid another one will do it, so he chisels a hold. Often the route was possible, but he was too weak, so he chisels.

WHAT ABOUT THE ABILITY AND ATTITUDES OF AMERICAN CLIMBERS?

I like them, and there are very good climbers here—Ron Kauk, Jim Karn, Scott Franklin.

I enjoy climbing in a quite atmosphere with good friends, not in a big crowd. Rifle is so crowded. It’s like skiing!

Sport climbing in OK, but people don’t look for an adventure anymore. It doesn’t bother me. I like everything—climbing has a lot of aspects.
==
WHAT IS YOUR FAVORITE AREA?

No, I like the landscape and the memories, but I don’t like the kind of climbing because it is finger pockets and I have BIG fingers. On hard routes it’s a problem. I like climbing edges more.

WHAT SORT OF ROUTE DO YOU LOOK FOR NOW?

I like long routes that are hard. I never have been motivated to work a route—no more than three days and I leave.

WHEN YOU ARE TOO OLD TO CLIMB WHAT WILL YOU DO?

I am sure I will climb as long as I can move.

By Will Gadd, Associate Editor Rock and Ice.