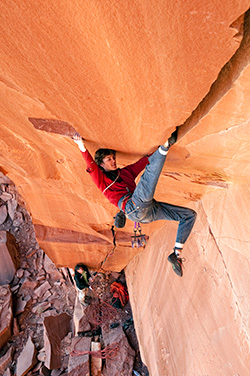 Eighty feet off the deck, Mason Earle snapped the right leg loop of his harness, worn thin from his previous 16 attempts at groveling up the 15-foot flared roof in Indian Creek. “It’s like trying to wrestle a rabid elephant covered in bacon grease,” Earle says of the previously unclimbed offwidth. “Every time I tried this pitch, it was one of my least enjoyable climbing experiences ever.”

Leg loop or not, Earle continued to push and pull his way through the last 45 feet of sandy crack guarding the anchors. The result was The Price of Evil (5.13), which may be Indian Creek’s hardest offwidth.
At 22 years old, Earle has quietly sent some of the hardest crack climbs in the desert southwest. In November he established the razor-thin Machete (5.13) at the Reservoir Wall as well as The Price of Evil, at the Blue Gramma. He has onsighted Indian Creek testpieces such as Tricks Are For Kids (5.13) and Learning to Fly (5.13), flashed the classic Six Star Crack (5.13-), and pulled the fourth ascent of Dean Potter’s Concepcion (5.13). Repeats include Belly Full of Bad Berries (5.13), the runout Air Sweden (5.13R), and the super-thin splitter From Switzerland with Love (5.13).

With his new blog, jokingly titled “Rock Climbing Xtreme,” Earle documents his climbs in a comical way, introducing himself with the words, “I dropped out of college in 2008 to become an unprofessional climber.”

He says, “Rock climbing shouldn’t have to be serious. So I try not to be.”

Earle’s recent repeat of Dean Potter’s steep finger-crack boulder problem Sasquatch (V11) in Yosemite was captured by his own video camera. The video depicts the amusing moment when he catches the jug and shouts for a spot, but no one arrives.

Born in Concord, Massachusetts, Earle fell in love with climbing at Cathedral Ledge in New Hampshire. “I was around 11 years old and rock climbing seemed like the raddest thing to do.” He, his parents and siblings all started climbing at the same time.

“I was always scared shitless,” he recalls. “I remember climbing one of my first 5.9s with my dad when I was 15. I got off route on the first 5.7 pitch and cried when my Dad got to the belay because I was sure we were going to need a rescue. It was a slow learning process.”

After moving to Durango, Colorado, in 2006 to study geology at Fort Lewis College, Earle found the perfect cracks of Canyonlands. He dropped out of college to dedicate his life to climbing, and now roams the country in his mother’s old Volvo V40, dividing most of his time between Indian Creek and Yosemite Valley.

“El Cap is my favorite crag by far,” he says. “I’ve climbed it 10 times.” Having free climbed Golden Gate (5.13b) on El Capitan, he is currently projecting a new and harder eight-pitch variation.

Last year Pete Rhodes and George Ullrich of the U.K. recruited Earle to attempt an all-free ascent of the east face of Cerro Catedral in Chile’s Torres del Paine in January and February of 2010.

“George led the hard face pitches and I was the crack guy,” explains Earle.

Rhodes on his website recounts Mason’s “seriously impressive” attempts to free the Catedral’s crux pitch, a corner to a spectacular splitter: “With what looked to me like unfathomable moves and microscopic holds, the leads were an intense watch further enhanced by a crucial knifeblade pulling in the first fall and Mason being saved from crashing into the portaledges by a number one bird-beak!”

The team eventually retreated because of terrible weather, but Earle plans to return, saying, “This past winter I learned that it’s far better to fester in a Patagonian cave than in my parents’ basement.”

In person, Earle is generally low-key and soft spoken. But he also likes to entertain. He has shown up at the crag in retro spandex tights, has hucked himself off a cliff in a massive whipper, and goes out of his way to make people laugh. 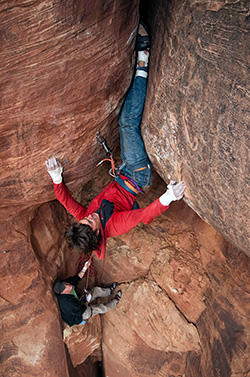 What do you likeabout pure crack lines?

Cracks always made the most sense to me, despite growing up in New England where cracks are quite rare. It took a while for me to appreciate other types of climbing. Anything other than pure crack climbing seemed lame and unaesthetic. I realize now that it was because I sucked at anything else.

In 2008 you onsighted Learning to Fly in Indian Creek.

Learning to Fly was a big surprise for me. I got on it expecting to hang all the way, but just kept chugging. I was excited afterwards thinking I had done the first onsight, but found out the next day that Alex Honnold had onsighted it a week prior.

Do you think The Price of Evil is the Creek’s hardest offwidth?

It’s by far the rowdiest one that I’ve done, but there are many more out there.

Do your parents support your lifestyle?

Surprisingly, yes. When I told them I was going to drop out of Fort Lewis College, they were psyched.

They just want me to be happy. They are so supportive I’m afraid their encouragement will leave me career-less at 30, with calcified fingers. Just kidding—I’m very grateful and would not be able to climb nearly as much if not for them.

Any epics over the years?

I usually bail before things get too serious. The portaledge collapsing 1,500 feet up the Catedral in a blizzard wasn’t so good, but we ended up fine.

Rumor has it you play a mean banjo.

I started playing banjo in high school after getting bored with the guitar. Banjos travel well and make people laugh. It suits me. Playing banjo is my favorite rest-day activity. Well, that and baking apple pie.
In the winter of 2009 I got to play banjo with Nico Favresse and his Gypsy Band in Patagonia. Nico has taught me the finer points in life and jamming.

In his Belgian-French accent he tells me, “You have to hit the spot!”