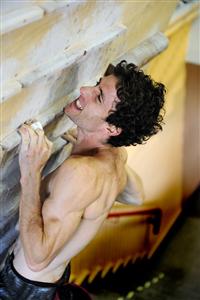 For years, Spain has been breeding climbers who can crush limestone with one pinch. You’ve heard of Dani Andrada, Ramón Julián Puigblanque and Edu Marín. In the past few years, Patxi Usobiaga, the 28-year-old Basque climber, has joined them at the top by pumping out onsights of Home Sweet Home (5.14b/c) in Pierrot Beach, France, or Bizi Euskaraz (5.14c) in Navarra, Spain, or polishing off a 5.15 trifecta with La Novena Enmienda (5.15a), La Rambla (5.15a), and Realization (5.15a). What does it take to climb at this elite level? Steroids? Or winning genes and tendons of steel?

According to Patxi (pat-chee), who has a BMI of 19 (see page 57 for more on BMI), what you’re born with has little consequence. You have to have con ganas, or psyche, to get what you want. Staying eager to train, and working in cycles to peak throughout the year, is the best way to maximize your potential and avoid injury.

Usobiaga has built on and tailored the same basic training guidelines for the past seven years. He starts with up to a month of rest followed by a four- to six-week period of “building a base” for the year. During the first three weeks of this phase, Usobiaga climbs 10-20 routes a day, knocking the difficulty down to a range between 5.12a and 5.12d (aka “easy”). For the second half of the base training, Usobiaga raises the difficulty of the routes, but keeps it below 5.13b (i.e., a full number grade below his hardest onsight).

“This base is very important for the second cycle,” Usobiaga says.

That includes strength and power training. Only at this point does he begin any fingerboard or campus-board training.

“You have to start off slowly,” he says. “When I was 23, I used to climb really strong in June, but at the end of the season I was fighting a lot. Now I don’t build so fast.”

During this power-training cycle he only climbs outside during the weekend, and otherwise can be found in the gym Monday through Friday for three to six hours of indoor bouldering, traversing and fingerboard and campus-board workouts, which are supplemented with weight lifting in the gym.

“I don’t train for specific routes or specific moves,” says Usobiaga. “When I am at my peak, I know I can do the moves.”

After strength training he rests one or two days and then hits a competition, tailoring his training regimen to peak before each major comp. As a professional competition climber, he goes through six to eight cycles a year. In 2006 and 2007 Usobiaga reigned as the World Cup winner, and in 2008 he ticked off the European Championship, sending Action Directe (5.14d) the next day.