A year or two later, Roy caught wind of the Bulger List—the 100 highest mountains in Washington—and began ticking them off. He finished the highest 100 in 2006, age 76, and got started on the next hundred.

Roy is now 87 years old and only has 26 peaks left. And he’s still going strong.

This is Roy McMurtrey’s Story.

Well, the earliest days I can remember [climbing] are from 1974 or 1972 when I really started doing serious climbing. I had been hiking before. I got into climbing, though, when my daughter’s soccer club wanted me to climb a mountain with them. I decided, instead of one of the thousands of good scrambles, to take them up Mount Stuart, which is the [second highest] non-volcanic mountain in Washington. It has a few easy routes.

At basecamp, I showed the girls how to rope up, but in my excitement, I left the rope behind the next day when we went for the summit. So we climbed the mountain without a rope.

On the way down, one of the girls began crying. The lower snowfield was steep. Oh, but we got down okay.

After that, I realized that I needed more experience if one of my kids wanted to go climbing again. So I took all the Seattle Mountaineers training courses. For many years I was leader of hikes, snowshoe trips, scrambles, Ski Mountaineering, and basic and intermediate climbs. Notable climbs were: Liberty and kautz on Rainier, West and North ridges Stuart, North faces of Baker and Shuksan and North and West faces of Forbidden. I had no injuries or failures.

Seattle Mountaineers have the best training courses in the world; I owe them a lot, but their safety committee told me I couldn’t participate any more. Safety concerns.

Probably a good thing. Anyways. Whatever.

But then I heard about the Bulger Hundred Highest List and started on that, oh, around 1975, 1977. I finished that off in 2006 and now I’m working on the 200 highest mountains in Washington.

Everyone who used to climb with me is either sick, their bones don’t work, or is dead.

So I climb solo now, mostly. Minor Peak in Washington Pass last April was the last time someone went climbing with me. People were happy to have me along since no one else wanted to lead that. But they have their own group, these four young guys, and like to go faster than me, so I don’t think they’ll climb with me again.

Twenty years ago, I could go in and out in a day or two. Now I like to hike in, drink my wine and my rum and eat my cheese sandwiches…anyway, I’m piddlin’ along.

I climbed in the Caucasus Mountains with Russians after the fall of the Soviet Union. [Jim] Whitaker got Russians, Chinese and Americans together to climb Rainer to show that we can all get along. Afterwards the Russians wanted to entertain Americans so Ed Boulton put together a group of Americans to go climbing in Russia. So we went to Russia. All transportation and travel was taken care of. I had a world-class climber all to myself. We reached the summit of Elbrus [18,510 feet, highest mountain in Russia and Europe].

I haven’t kept up with new climbing techniques since the Mountaineers courses. I have some old chocks, and some of those mechanical devices you squeeze and stick it in—I think they’re called Friends. I have some Friends. But I mostly stick a chock in, put a sling on it and go.

I understand pounding metal into mountains, but soloing 1,000-foot vertical walls blows my mind. Can’t watch it. It turns my stomach. Don’t understand how they do that.

I’m amazed at what people do these days without protection. It scares me so much I don’t even want to see it…

Sometimes I walk up to a cliff and put my hand on it and get a rush of adrenaline. But I’m able to control myself.

Yeah, yeah, I’m slowing down. I needed operations on my eyes since I was getting glaucoma or cataracts or something. I got prostate problems—so it’s difficult to piss. I’ve asked the Docs for a mechanical knee but they won’t put one in. I described what I’ve been doing—hiking 15 miles in, climbing, 15 miles out—they won’t replace the knee since they said it seems to be working.

Have to limit myself to five miles of hiking and two thousand feet of gain per day. More than that, I get pain in my knees and shoulders. A few miles of using walking sticks and my shoulders won’t let me sleep at night.

I do a lot of thinking on the trail, always looking for a place to sit down, put my feet up, take a drag on a good cigarette and sip some rum.

But I have a good heart still. Only worry is my eyes. Don’t know about the knees. Sometimes they’re fine, sometimes they swell right up. I burst the, oh, what’s it called, the bursa one trip about 15 years ago. Sounded like a gunshot! Luckily I had a good partner then to carry my pack. Took a couple of weeks to heal up.

So I don’t know what my limitation is.

One trip, they started a rescue for me but I didn’t need it, so that was embarrassing. I always call my wife when I’m out and if I’m two days late, she’ll send for help.

But when I go into remote places and there’s no one out there, I don’t want people coming after me. If something went wrong, I wouldn’t be alive, so no point in trying to find me.

I have 26 peaks left. But I’m unable to recruit people to belay. You need a belayer for 10 or so of these. I can’t do them solo. But I’ll pick away at them. I’ll try to do five or six this year. Problem is, the easy pickin’s are gone.

Now that everything hurts, it takes motivation to go back out. So why do you do it? There’s something about being on a summit, especially all alone—it’s difficult to describe—but there’s nothing else like it.

So I continue going into the mountains. I can’t stop doing it.

Roy McMurtrey’s 100 Highest and 200 Highest Washington Mountains Ticklists:
Roy lists the year he first climbed each peak as well as the number of times he has summited—some upwards of 15 times. At the bottom of his incomplete second list, he writes: “Please note, should you wish to participate in this endovor, call Roy.” 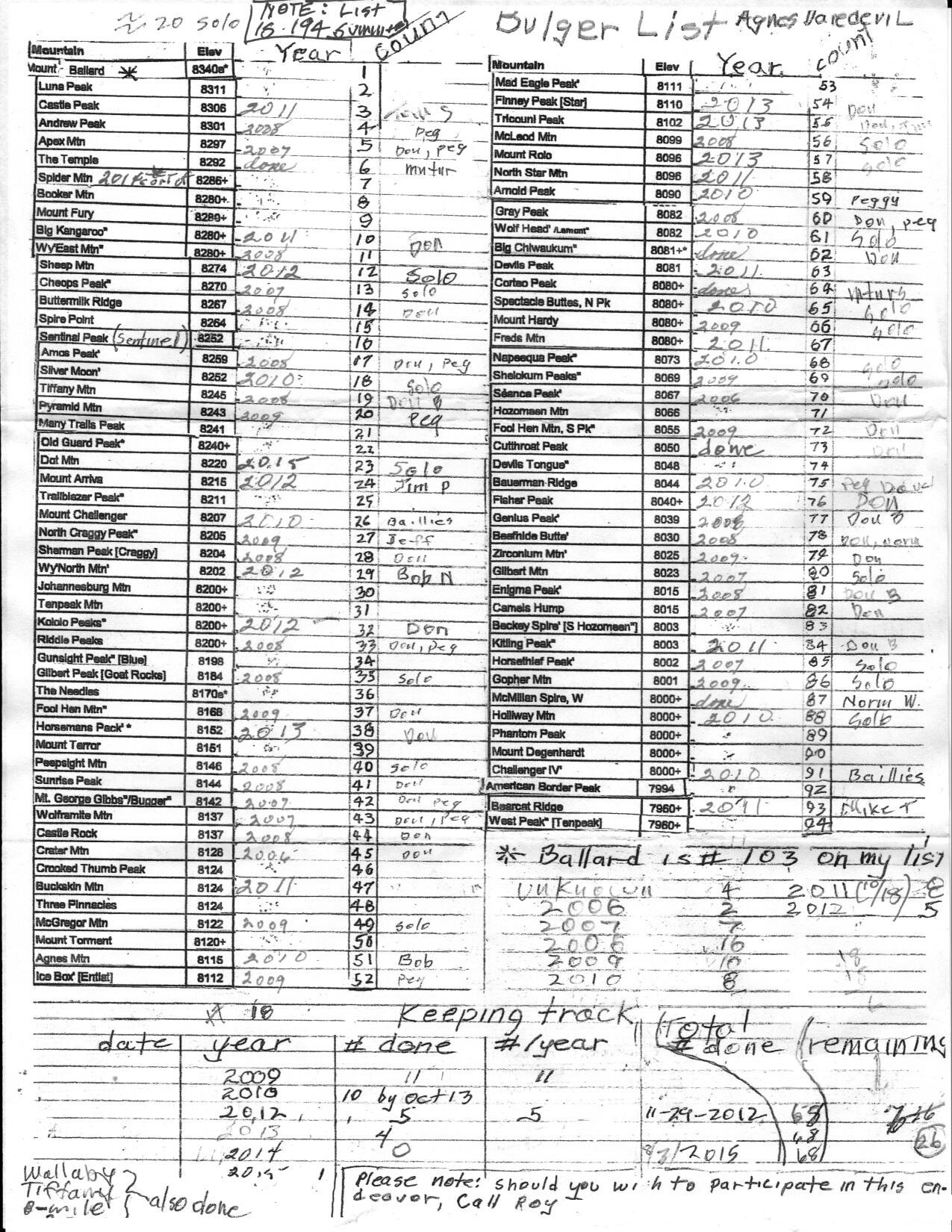