I wanted to be an alpinist. Somehow I just ended up bouldering. It was a very accessible, new and exciting sector of climbing, and I naturally took to it. I was a gymnast as a kid.

I eased into [route] climbing. My forte was always project climbing, from my gymnastic background, where you practice something over and over until you perfect it.

I did my hardest route and boulder problem in the same year or so, around 1997, Cryptic Egyptian (5.13c) and the Undercling Traverse (V9). Christian [Griffith] told me that no woman would ever do [the Undercling Traverse]. That was part of what drove me to it. I think he partially said it just to egg me on!

Project climbing is as much mental as physical, having that relentless will to try something over and over and break through that self-limiting belief that you can’t do it. That’s what I always loved. It’s the journey of discovering something you once thought was impossible can become possible.

For the Nose in a day I put in four months of effort. I had to learn how to trad climb again because it had been years and to face that fear in myself of wondering if I was capable of it. … Probably the majority of people in their 50s who have never done something like that would say they couldn’t do that. Whatever. I can still learn things. 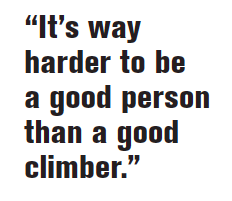 Entrepreneurship is a very frightening thing because you’re going into the unknown. Fear causes failure. In climbing, if you’re run out and on a bad piece or whatever, and you become afraid, then you’re more likely to fall off than if you are able to breathe through the fear. Entrepreneurship boils down to belief and being willing to take that chance and not letting your fear control you. You can operate from a point of fear and sort of not be willing to take risks and try new things and invest in things that may or may not work. Being conservative, you can lose opportunity.

There’s always a solution to a problem. It’s not like, O.K., life is over. Even if a business is bankrupt, you can always start a new business. Other doors can open. You’ve got to see the opportunities as well as the failures.

Entrepreneurship is exactly that. You’re sticking your neck out, and you have a dream and a vision and no idea if it’s going to work or not but you take that chance, and it’s a journey.

When I founded EVO Rock + Fitness, I knew following my passion matters and has led to some of the most happy and memorable times of my life. I went into EVO thinking if I lose everything I could always fall back on that and be a dirtbag again! (Laughs).

I was an asshole. I was that classic pretentious Boulderite that thought I was better than everyone else. It took a while to learn that to be an elitist is not a cool way to live. It’s isolating. We collectively in our tribe of climbing have gotten much better, but in that era there was a lot of that.

Grades just don’t matter. I remember long ago, writing in my journal, “It’s way harder to be a good person than a good climber.”

Finding my birth mother was a really serendipitous thing. It was something my whole life I wondered about. … My adoptive parents were extremely supportive of my finding my biological ones.

Two years ago I met her and my grandparents and her sister. It was incredible. We all sat around this table and talked for days. I think it was validating for both sides. When she decided to give me up, she was 19, it was a family decision. I think my grandfather as the patriarch took responsibility for the decision. He was so happy to meet me. … I think he lived with a lot of anxiety for 48 years wondering if he made the right decisions, and I was able to tell him I was grateful. I wouldn’t be where I am today. I wouldn’t be a climber or have the opportunities I have. Being a climber is probably the most important thing in my life. It’s who I am.