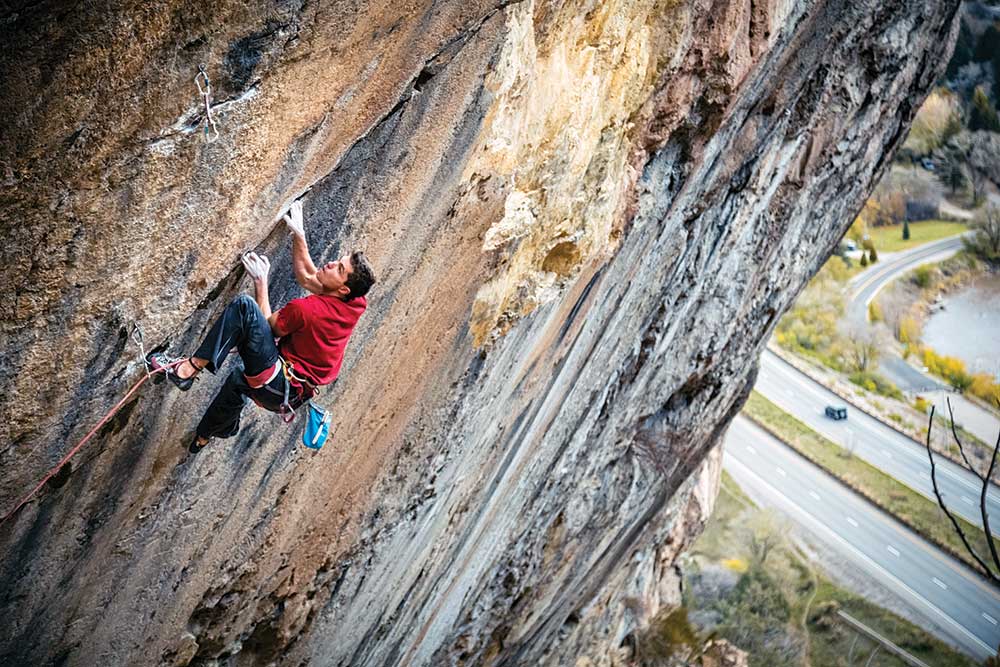 A year has passed since we embarked on the “Building a Better Climber” training series. Those of you who have followed the routines from
the start should be noticing serious improvements by now. I hope that most who have come this far will be keen to incorporate the positive aspects
of these programs into your future climbing plans.

If you wish to write your own programs, I suggest using the same principles of periodization to guide you. Divide your training into blocks, with allocated
themes. Make subtle changes and maintain variety. A good training program should be flexible and accommodate minor whims, so that you can actually
go rock climbing!

Most of the phases have emphasized laps and repetitions to promote adaptations in strength and endurance. For this final phase, however, it’s time to focus on the skill element and see if all the hard work has paid off. Elites
will notice more rest between sessions. This is so you can recuperate from the overall rigors of the program and perform at your highest level. Having
finished the previous phase, take four full rest days then commence.

All sessions can be performed at the crag or indoors. It’s up to you how you fit them in to your weekly schedule. If you are unable to
visit a new wall or crag for an onsighting session, then simply do a redpoint or boulder session instead.

One session per week

Conduct these sessions at a gym or crag with a good selection of routes that you haven’t climbed before, close to your onsight grade.
Perform your usual warm-up for onsighting: e.g.: three or four routes in ascending grade order. The first and second should be easy, the third should
induce a light pump, the fourth a fairly major pump. Take good rests (i.e.: 10, 12, 15 minutes respectively) in between. Then select four routes to
attempt onsight, at the following grade levels:

Try to select routes that are slightly different in angle and climbing style. Read each route first. Identify all the holds, plan the hand sequences, look
for key clipping and resting positions, identify the hardest moves and pay particular attention to the top. Visualize yourself climbing the route in
real time and go through the whole thing at least three times before you commence climbing. Attempt all four routes and rest 25 minutes in between,
or longer (up to 45 minutes) if climbing outside. Warm down on an easy route. Keep notes on your performance. If you fell, then try to understand why.
Did you misread a move? Did a series of minor mistakes cause cumulative fatigue? What angle and climbing style suited you best? Were confidence or
other mental issues a causal factor? How could you tweak your training to improve your performance next time?

The aim of this session is to work and send a redpoint project over two or three sessions. If you are climbing indoors, warm-up on the
bouldering wall by trying progressively harder grades over a 30- to 45-minute period until you reach approximately 75 to 80 percent of your peak level.
If you are climbing outdoors then do two warm-up routes (easy and medium level). Select routes that you know fairly well. Now move on to your redpoint
project and climb it bolt-to-bolt, practicing each section as you go. If you are forced to grab draws or use other colors (rainbow) then take the time
to find the correct sequences and clipping positions. Rest on the rope to avoid cumulative fatigue and use these rest periods to memorize the sequence.
Rest 30 minutes then attempt the route in two to four sections. This will enable you to engrain the route, teach you to flow and climb under the influence
of fatigue, and provide the chance to refine the sequence. Rest another 30 minutes and then, subject to the difficulty of the route and how well the
links went, consider going for a redpoint. If you only managed the route with three or four breaks, then simply go for links again and try for the
redpoint next session. Stick with the route over the next two or three sessions until you complete it. Then move on to a different project, which affords
a slightly different climbing style. Keep notes on your progress: Should any tweaks be made to your training?

Conduct these sessions at a gym or crag with a good selection of boulder problems that you haven’t tried before. Choose either the onsight
or the worked option, and don’t try to do both in one session. Use your standard boulder warm-up (as given above for routes) for both sessions.

a) Onsight. Select 12 boulder problems to attempt onsight or to flash. Ideally, four should be just below your limit grade, four should
be at your limit and four should be slightly harder. Read the sequence of each problem carefully and visualize it several times before setting out.
If you fall, allow yourself one more go. Rest eight minutes between problems. Warm down afterwards on two or three easy problems.

b) Worked. Select two boulder projects that you would expect to complete in a maximum of four sessions. The problems should afford
different climbing styles (e.g.: one crimpy and the other slopey, or one gently overhanging and the other a roof). Spend 30 minutes working the
first problem (taking good rests to avoid cumulative fatigue), then rest 15 minutes and move on to the second problem. Work it for 30 minutes then
warm down. If necessary, revisit these problems for the next two or three sessions, until you complete them, but don’t spend more than four sessions
on the same projects.

For both sessions, keep notes on your performance.

This article was published in Rock and Ice issue 216