The Building a Better Climber training-plan has been running for the previous six issues and has included the following phases: 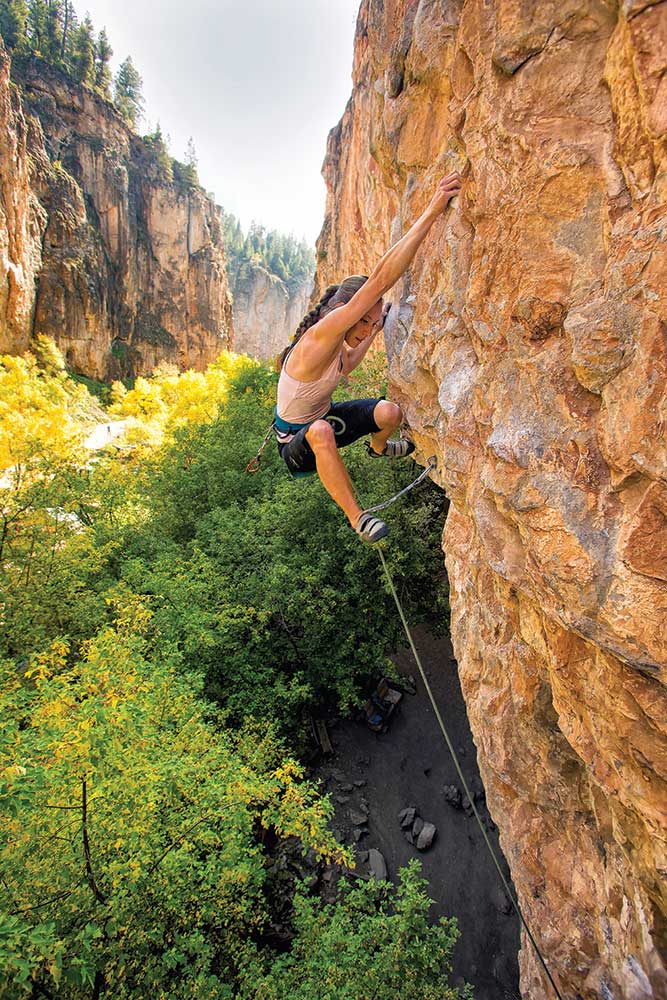 If you’ve stuck with the series so far, you ought to be feeling pretty fit by now, especially after the low-intensity endurance phase
outlined last issue. If you’ve only just joined in, simply start with two weeks of low-intensity training, and then continue with the power-endurance
training given below.

As always, try to climb outside as much as possible and for best results, tie your crag sessions in with the program. For example, for power endurance
do boulder intervals, hard onsights or redpoints, and for strength, simply boulder or work a hard project. If you go away on a major climbing trip
(for longer than five days), you should take at least three full rest days before and after the trip before resuming training.

Power-endurance conditioning will give you the fitness required for sustained climbing sequences of between 15 and 40 moves, typically
encountered on sport routes. This is the main focus of the phase, although it includes a small amount of bouldering to keep your strength topped up.
After finishing the previous phase (No. 214), take four full rest days and then commence. At the end of the phase, take another four rest days and
see the next issue for the final phase in the series. Those of you who have limited access to a climbing gym should simply swap the bouldering sessions
with a home hangboard session.

Select the appropriate weekly plan for your level. If you are required to train on two consecutive days, then go bouldering or use a hangboard
on day one and do power endurance on day two. It’s up to you how to fit the sessions into your weekly schedule.

Number of sessions per week

Four different structure options are given, two for the lead wall and two for the bouldering wall. Do not attempt more than one per session and the best approach is to alternate between them.

OPTION 1: Redpointing / Warm up then work the moves on a redpoint project that you would
hope to complete in two or three visits to the gym. Rest 20 minutes, then have a go where you attempt to do the route in two or three sections. Rest
20 minutes again and then have two more redpoint attempts. Next session, repeat the process and try to send the route. Allow yourself one more session
on the route before moving on to a different project, one that affords a slightly different climbing style (for example, if the first project was crimpy,
then move onto something on rounded holds, or a steeper angle).

OPTION 2: Doubles – 6x2s / Warm up then select two different routes of the same grade that
you can climb consecutively. See guidelines for optimum wall angle. For intermediates, the grade should be approximately one below your current maximum
onsight level (and two or three below for elites). Lower off, pull the rope and move to the next route as quickly as possible. Do this six times with
rests equal to climbing time. Aim to complete the first four sets and fail on the fifth or sixth. It is better to use a selection of different routes
than sticking to one or two, and to try climbing them in different combinations or a different order for variety. Make the training slightly harder
each session, first by making the first route a grade harder, and then by making the second route harder.

OPTION 1: Boulder intervals – 7x3s / Select three different boulder problems of approximately
the same grade that you can climb consecutively. See guidelines for optimum wall angle. The grade for intermediates will be approximately one below
the level you can flash at your limit (two or three below for elites). Move from problem to problem as quickly as possible. Take an eight-minute rest
and attempt this seven times. Aim to complete the first five sets and to fail on the sixth or seventh set. If you start training and realize that the
problems are too hard or too easy, adjust the grades accordingly. Make the sessions slightly harder by gradually adding more difficult problems.

OPTION 2: Circuits – 6 x 40 moves / To warm up, work out the moves of a sustained
40-move circuit on the bouldering wall. This circuit should include upward, downward and diagonal climbing as well as traversing. Always finish by
climbing up for the last few moves. One option is to link together some of the set, color-coded boulder problems, but down-climbs will need to be easier
than ups. Avoid hard single cruxes or good rest positions. Go for six repeats with 10 minutes rest. If you fail on the fifth or sixth, then you’ve
judged perfectly. If you start training and realize that the circuit is too hard or too easy, tweak it. You can train on the same circuit the next
session, but after that, scrap it and set a new and slightly harder one.

Use boulder and hangboard sessions similar to those in the strength-training phases. To summarize: For bouldering, advanced/elite level climbers should work hard projects, and beginner/intermediates should go for problems that they can do within three or four tries. Projects should be overhanging but don’t forget slabs and vertical problems during the warmup. Vary the holds and style of projects and emphasize your weaknesses.

Rest two to three minutes between all exercises. Calibrate exercises using a weight belt or selecting a smaller hold, or switching from two arms to
one arm.

1. DEADHANGS One or both arms, subject to ability. Do single hangs and aim to reach the failure point before 10 seconds.
(Intermediates) do three sets per grip and (Advanced/Elites) do four sets. 1. Half crimp.
2. Hang/open-hand. 3. Full crimp (two sets only).

3. FINGERTIP PULL-UPS (Intermediates) OR campus offset pull-ups (Elites) with a half-crimp grip on a campus rung or a first-joint, flat finger hold. All sets to failure, using a pyramid structure.

5. PULL-UPS (on bar or jugs). Four sets of approximately 6 to 8 reps to failure. Two arms (Intermediates).
One are with assistance (Elites).

Do three sets of 20 reps of the following exercise, with two minutes rest between sets. Only go to failure on last set. 1) Push-ups (kneeling if required). 2) Reverse wrist curls. 3) Finger extensions (with rubber band).

This article was published in Rock and Ice issue 215