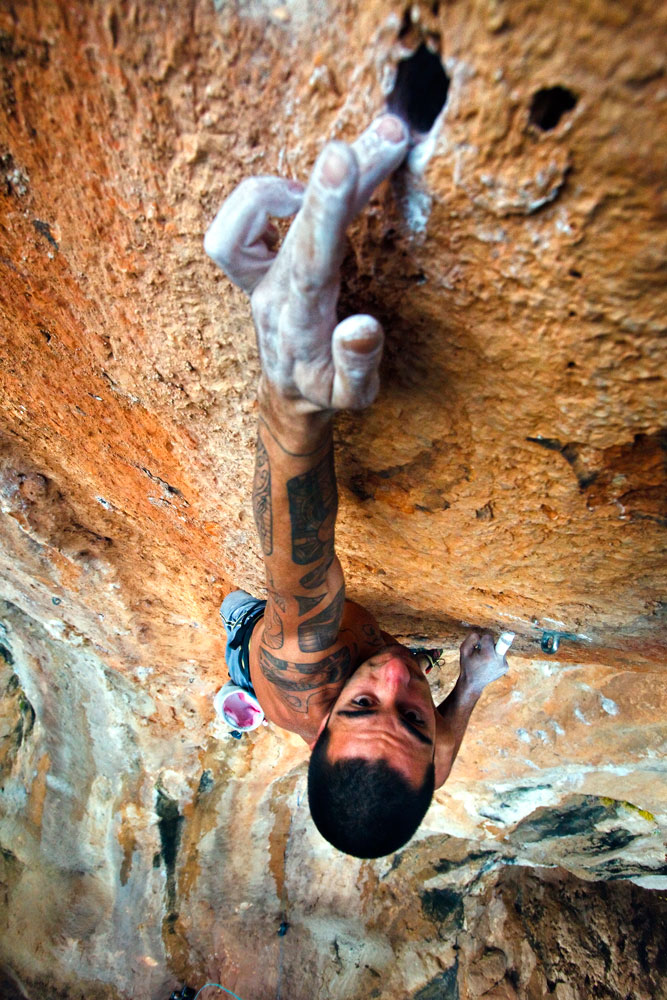 I’m breaking into climbing 5.13s and looking for an edge, but I am tired of reading the same old stuff about sports nutrition. Has anything new been discovered this century and do you think that minor tweaks to a nutritional regime can help give climbers an edge?

The subject of sports nutrition hasn’t changed too much as far as the average climber is concerned, but some recent revolutionary discoveries
have turned this subject upside down for elite athletes. The main thing that scientists have learned in the last decade is that we can use nutrition
to trigger the release of the specific enzymes or hormones that play vital roles in the processes of getting strong or improving endurance. In other
words, we can use nutrition the same way that cheaters use drugs. The crux comes in understanding that different processes are involved for strength
and endurance and that we must switch from one strategy to the other depending on which of the two we are training.

For example, for years we’ve always thought that our stores of muscular glycogen should be as high as possible during endurance training (in other words,
prior to and during training we should take carbohydrates and consume energy bars or drinks). But ironically, scientists have found that training in
a glycogen-depleted state dramatically improves (and in some cases doubles) our response to an endurance session. Improvements in endurance are caused
by a variety of complex processes, which result in an increased number of mitochondria (“energy factories”) in our cells as well as the activity of
certain fat burning enzymes. Those who are keen to read up on the technical background should Google a group of receptor proteins known as PPAR gamma,
and also an enzyme called AMPK. For maximum benefits from an endurance session we need to burn fat in order for PPAR gamma and AMPK to play their parts
in boosting endurance, and clearly we won’t burn fat if we have loads of glycogen to burn first. Put more simply, if you think back to the days of
our early ancestors, the people who survived were the ones who could run for long hours on an empty stomach to scavenge for food. By scarfing loads
of carbs we are effectively blocking our bodies’ chances to respond to situations of extreme pressure in the way that nature intended. Not only will
this approach produce superior endurance but you will lose stacks of weight, too.

However, anyone who is foolhardy enough to switch entirely to this extreme and potentially dangerous approach will become exhausted, over-trained and injured.
The answer is to cycle your nutritional program for endurance training and go through brief phases (for example, a week or two) when you train glycogen-depleted
and phases where you train glycogen-replenished, using energy bars and drinks. Clearly you should always be fully glycogen replenished for hard crag
climbing and for competitions. Glycogen-depleted training should never be tried (to any degree) by juniors or veterans, and there is little point trying
it unless you climb in the 5.13s. Training in a glycogen-depleted state would do more harm than good to anyone other than elite-level climbers.

Optimum nutritional programs for endurance and strength training are prone to clashing with each other. For example, as we’ve just seen, an endurance session
with appropriate nutrition (minimum carbohydrates) will stimulate the activity of the enzyme AMPK, which is great for improving endurance. But AMPK
activity has the irritating effect of deactivating a genetically encoded protein known as mTORC1, which plays a crucial role in controlling protein
synthesis and muscle strength gains. One of the things that help to promote the activation of mTORC1 is the consumption of amino acids (the building
blocks of protein). The beneficial effects of protein for strength building have always been known, but now it is considered more important than ever
to take amino acid supplementation immediately prior to and after strength training, especially if you have previously conducted an endurance session
the same day. It is also important to consume carbohydrates between an endurance training session and a strength session to help to deactivate AMPK
in preparation for strength training.

The last decade of research shows a growing consensus that elite adult athletes should experiment by going through brief phases of endurance training while
slightly hungry and without taking energy drinks. However, they should always compete or “perform” with glycogen stores fully replenished. They should
always take amino acids prior to and after training and should consume carbohydrates between strength and endurance sessions.

Neil Gresham has been training and coaching for two decades. In 2001, he made the second ascent of Equilibrium (E10 7a/5.14X) on Peak District gritstone, and last year established Freakshow (8c/5.14b) at Kilnsey, also in the U.K. On October 13, 2016 he made the first ascent of Sabotage—an 8c+ (5.14c) extension to Predator (8b/5.13d) at Malham Cave, North Yorkshire, England. Sabotage is Gresham’s first climb of the grade.