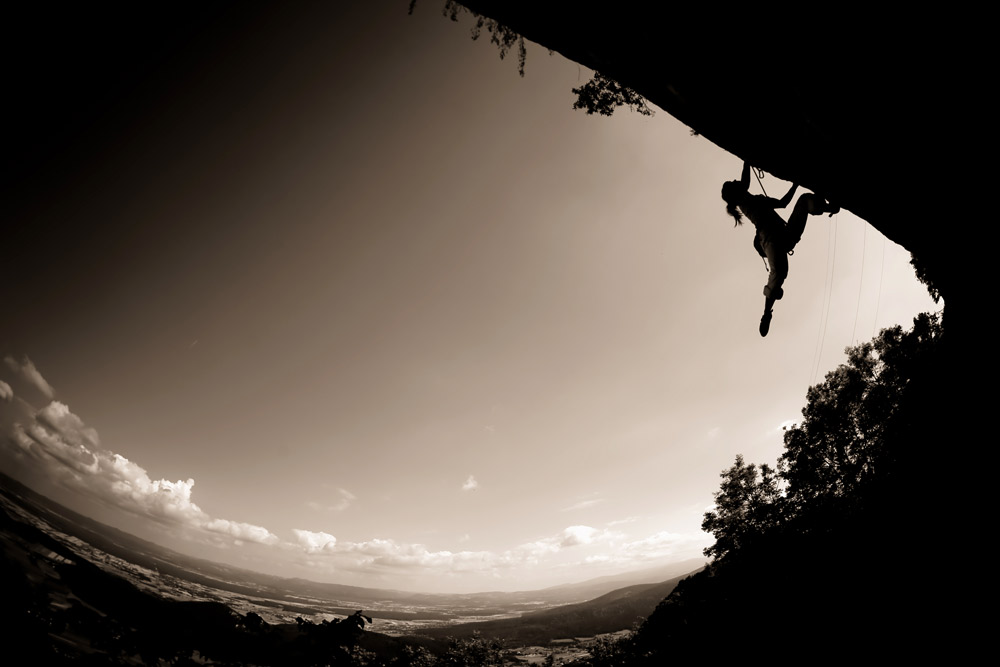 If your forearms inflate like balloons and your fingers always seem
to uncurl just before the anchors, then this two-part series on endurance training is just what you’re looking for. In Winter Workouts – Get Fit with Interval Training I showed how to use an interval program to train for power endurance. In this article, we’ll take a look at how to train low-intensity endurance for
longer routes. This crucial yet easily ignored area of training provides the key to recovering on the fly.

Low-intensity endurance refers to climbing sequences that are longer than 60 or 70 hand moves, which may take longer than six or seven minutes to
execute.

Climbers sometimes use the term “stamina” to refer to low-intensity endurance. In other sports it is common to hear endurance classified as aerobic
or anaerobic but in climbing this is confusing. For example, a given climb may have a short, intense, sustained section, requiring anaerobic endurance,
followed by a longer, easier section that calls for aerobic endurance. It is common for both aerobic and anaerobic energy systems to be tested on the
same climb, as lactic-acid levels rise and fall, and it’s difficult to separate them completely when it comes to training low-intensity endurance.

Out With the Old Routine

A common mistake is to ignore low-intensity endurance training altogether. Few gyms have routes that even come close to the required height, so we
take the easy option and simply order what’s on the menu. The usual approach of doing hard single routes (for high-intensity endurance) requires less
discipline and less pain tolerance, as you won’t be spending as much time under the influence of fatigue. It is a classic error to try to climb the
hardest possible grades every time you train. A commitment to training low-intensity endurance will require that you resist this temptation. Yet even
for those who can do double or triple laps on easier routes, or occasionally climb down and then back up again, there is still plenty of room for applying
a little more structure.

Low-intensity endurance-training sessions can be done on a lead wall or an easy section of a bouldering wall.

The lead-wall option is good provided you have a like-minded partner and you don’t hog popular lines when the gym is busy. Either lead up, lower back
down, pull the rope as quickly as possible, and lead again; or lead up, climb down, and then climb back up again. Down climbs will need to be considerably
easier than up climbs.

The bouldering wall is great for climbing alone. It usually works best to make up sequences at random, or to link easier color-coded boulder problems
or circuits.

Elites may wish to train endurance up to five times a week, with perhaps one power session in addition. Intermediates may do three or four endurance
sessions (plus one power session) and beginners should do two or three endurance sessions (plus an easy boulder session). It is universally accepted
that low-intensity endurance provides the best and safest type of training to start a training program. You can then move on to prioritize high-intensity
endurance training. Another tactic is to do a phase of concentrated low-intensity endurance immediately prior to an onsighting or trad trip.

Don’t always train the same number of moves at the same angle. Alternate between some of the variables given below.

A sequence of climbing requiring low-intensity endurance may either be sustained, with the moves all at a similar level, or fluctuating, with harder
sections interspersed with good rests. The former style requires a steady pace, perhaps taking the occasional quick flick of the forearm to attempt
to recover, whereas the latter is about sprinting the hard sections and milking the rests. Both styles are important to practice.

Below is a guideline for an intermediate-level climber.

Triple set: 2 or 3 grades under onsight limit for a single route.

Remember that the cumulative grade of three or four easy-ish routes racked up back-to-back should actually be pretty close to your limit grade. For example,
four laps of a short gym-length 5.11a, back-to-back, is actually equivalent in effort to a long 5.11d or 5.12a on rock.

Aim to complete between four and six work intervals for low-intensity endurance. To some extent this number will depend on how hard you pitch the
training grade, but if you do substantially less or more, then clearly the routes or circuits are either too hard or too easy. Always complete the
work, but by the seat of your pants. The first one or two overall sets should feel fairly comfortable, the next two should be tough, and the last two—a
desperate fight. It is also worth noting that low-intensity sessions can work very well for active rest, or injury rehab, provided you drop the grade
considerably lower and do one or two less sets overall.

Time-and-a-half is a good guideline. For example, if you’ve been climbing for 10 minutes, rest for 15.

Try the following combinations to add variety to your training. No single structure is superior to the other, so try one that is new to you.

This is similar to the structure given in No. 192 for high-intensity endurance, where intensity, length of climbing and rest times all remain fixed
and constant. E.g.: 10 mins on (or 100 moves) x 5 with 15 mins rest between sets.

Relax, breathe steadily and shake out.

Check out Part 1: Winter Workouts – Get Fit with Interval Training

This article was published in Rock and Ice issue 193.