We’ve all been there, bouncing off the walls on a work or family trip because we’re unable to snatch a session. When you’re away from home, it is frustrating to have nowhere to train.

Those who have been climbing a quarter of a century may remember Uli Wiesmeier’s iconic photo of a young Lycra-clad Stefan Glowacz working out on a hangboard mounted on the side of his van. At the time, this image was dismissed as the ultimate pose, but Glowacz had the last laugh by sending all the hardest routes as he traveled the globe.

Today on-the-go training is considered necessary, and elites like Alex Honnold bring elaborate porta-rigs on book or climbing tours. If we take time out from training, we lose vital momentum and progression and risk undoing all our hard work. Maintenance on the road, though, is a simple case of being organized and motivated.

The main considerations are where you will be training and how much space you have in your luggage. For venues, find rooms with beams, children’s play parks, trees or multi-gyms with bars. If you’re traveling by van, truck or a large car, you can even take a collapsible A-frame (see photo). These things are pretty straightforward to make, and various designs can be found online. The best and simplest consist of two equilateral triangles connected by horizontal beams.

These come in three styles. The first is the classic screw-in-doorway design. Second is the type that hooks over a door frame using a cantilever system. Last is a straight bar on cords that can be tied into position. Pull-up bars are great for working arm strength and core, but won’t hit the spot for longer trips away, since you aren’t training your fingers.

These are the way to go if you can find somewhere to set them up. Most porta-boards fit in a large laptop bag. They come with two cord ties, one in each top corner, for securing them. You may experience a degree of movement in the board, so avoid using very small or sloping holds. Better is to work out a way to fix the board in place. One option is the Honnold-method of hanging the porta-board from a screw-in pull-up bar. Another method is to use large G-clamps to fix the board to the wall above a doorway. Place a thin piece of plywood on the other side, preferably mounted with a piece of foam to prevent damage. This is a great setup that works best if you’re traveling by car.

If these items aren’t standard parts of your armory, they should be. Most climbers find it hard to make time for antagonist work and recovery sessions at home, as climbing takes priority. However, a holiday or work trip, when you’re stuck in a hotel room, may provide a perfect opportunity. These sessions are ideal during periods of injury, but prevention is better than cure, so fit them in regularly.

Suspension straps (discussed in detail in Training No. 234)
work on antagonist strength and core stability. Again, there are various manufacturers and degrees of design sophistication, but the best ones for
travel are those that attach to a single point. 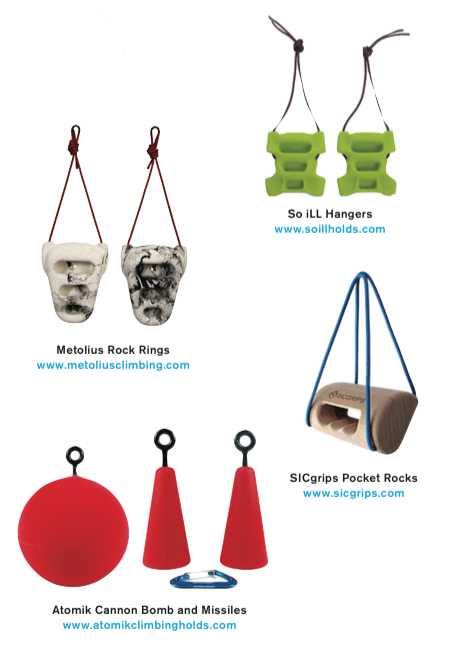 The best fusion between portability and training versatility, these devices are so small and compact there’s no excuse not to pack them. They enable you to train both strength and endurance, also to do virtually all arm and core exercises. Their postural-stability element (they swing) means you must
keep your body still. Metolius Rock Rings have become the industry standard, but similar devices include Hangers, made by So iLL, and Pocket Rocks or Gstring PRO, by SICgrips. You can do most finger exercises (including dead hangs and fingertip pull-ups) on these rigs as well as pull-ups or leg raises using the jugs on top.

Pinch balls are slightly more limited for finger work because they can only be used for pinching or as jugs. Nonetheless, most climbers consider their
pinching to be a weakness, so a road trip could be a good opportunity for applied focus. Popular devices are the Bomb designs by Atomik and Portable Power Grips by Metolius.

There are numerous makes and designs (e.g.: the classic Gripmaster), all of which are of limited use. Dynamic grip strength is simply not a priority for climbers, and while these devices are good for warming up and getting a light pump, you’re better off rigging up a board or some Rock Rings and working your fingers isometrically (statically), as in climbing.

Workouts on the Go—For Intermediates

Session: Rest two minutes between sets. All are to failure except warm-up sets

Set 1: Warm-up set to 90 percent of limit for five to six seconds.

Set 3, 4 and 5: Calibrate to hit failure at approximately four to five seconds.

Set 1: Warm-up set to 90 percent of limit for approximately five to six reps.

To calibrate, make them easier by bending one or both legs.

Set 1: Warm-up set to 90 percent of limit for approximately five to six reps/seconds.

These sessions use an interval structure. Exercises are done in blocks, with timed rests in between each set and each block. Calibrate the workload so that you avoid muscular failure until the penultimate or the final set of each block of exercises (e.g.: use a larger or smaller hold, lengthen or shorten the rest times, etc.). Warm-up and warm-down as for the strength session. Try to increase the number of reps gradually, or cut the recovery times each time you train.

Start a stopwatch, do a fixed number of reps, and then stop and wait until the minute comes around. Repeat five times consecutively, then rest five minutes and repeat the whole block again three to five times. Do a trial session first to calibrate the workload.

As a rule of thumb, for reps, do a third of your maximum capability (e.g.: if you can do 15 at your limit, then do five in this session).

2. ON-THE-MINUTE STRAIGHT- OR BENT-LEG RAISES on jugs or bar (Structure as for 1.)

Neil Gresham has been training and coaching for two decades. In 2001, he made the second ascent of Equilibrium (E10 7a/5.14X) on Peak District gritstone, and last year established Freakshow (8c/5.14b) at Kilnsey, also in the U.K. On October 13, 2016 he made the first ascent of Sabotage—an 8c+ (5.14c) extension to Predator (8b/5.13d) at Malham Cave, North Yorkshire, England. Sabotage is Gresham’s first climb of the grade.