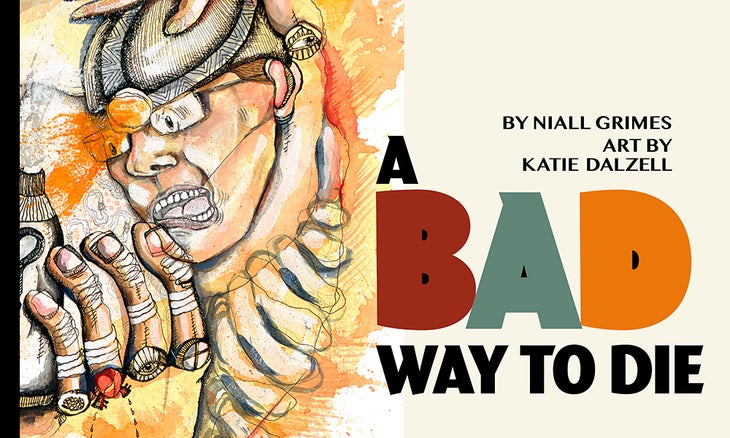 To help alleviate today’s trying times, Rock and Ice is making selected stories from archived editions of ASCENT available here for free.
Ascent is Rock and Ice’s annual compendium of the best climbing writing, and was founded in 1967 by Yosemite legends Allen Steck and Steve Roper.

We will offer one free ASCENT feature each week. Please check back for the next installment, or to enjoy the full array of writing and imagery from Rock and Ice subscribe here.

This feature appeared in ASCENT 2012.

Climbing, as we all know, is a dangerous sport. You don’t need me to tell you that. And when we speak to others, it is often this aspect that they fix upon, and it’s not rare to be asked the question, “What’s the closest you’ve come to being killed?”

Well, let me tell you.

It was in Kyrgyzstan, that gun-riddled melting pot of some of the maddest, wildest cultures on the planet, yet it was not a bullet that almost got me, but something a lot worse.

At basecamp I was afflicted with a faulty headtorch. It was one of the very old Petzl Zooms. The band had lost its vim, and the heavy parts drooped low over my eyes and down my neck. Add to this a faulty wire that made the light randomly turn off. Then on. Then off.

A real pain in the arse.

Speaking of which, integral to the tale was my ever-recurrent case of norberts. My hemorrhoids were playing up, as usually happened to me on any expedition. I liken their blood-amplified pulsations to a painful atomic clock, keeping time with your agony. Any co-sufferers will no doubt empathize here, and will be in the small percentage that do not snigger at we who are struck down by this disorder.

The pain was made even worse by the fact that I wasn’t sleeping well at night. On the way in I had a brand-new Thermarest, but after the donkeymen thrashed through thorn bushes, it had acquired a plethora of perforations, making it practically useless.

I was prepared for this, however, having brought a tube of seam sealant. Each day I would go to the river, inflate the mat, immerse it in the frigid melt water, and seek to locate any points of bubble emissions, telltale signs of a puncture, often invisible to the naked eye.

I would then mark any holes with a pen, wait for the mat to dry, squeeze some of the powerful seam sealant onto the spot, and hope. Unfortunately, with so many holes in it, the pad would deflate each night, and this process went on day in, day out, almost throughout the entire trip.

Bedtimes were, therefore, cantankerous affairs—what with the hemorrhoids, the Thermarest and the faulty torch. That bloody torch. Often I would have to make my way on feel.

For example, one evening while brushing my teeth, I accidentally squeezed out a pea-sized blob of E45 cream—a skin moisturizer, great for keeping expedition hands in good nick—onto my brush. Arrgh, the taste was horrible. Then I laid myself down on the deflated Thermarest, to pulse the night away.

The only thing in my kit that would calm the angry ’roids was my tube of Preparation H, a soothing cream that one applies to the epicenter of the pain and inflammation. It did indeed help. Each night I would digitally smooth some over the angry area. On one particular night, I was off to bed, when, as usual, the torch packed up. Blast.

In the door of my tent, I was on all fours, half in, half out. I felt around for the Prep H, squeezed some onto my fingertip, and was in the very act of slipping my hand under the elasticized waist of my fleece trousers when, for its own reasons, the light came back on again. The sight made my blood turn cold.

For there in my left hand was the tube. Yet not the Preparation H as I had imagined, but my handy and ever-useful tube of seam sealant.

I calmly brought out my right hand, rubbed off the glue on a tissue, and went to bed. A fitful night’s sleep followed, full of horrors and imaginations. I dreamt of myself getting bigger and bigger, one day to explode in basecamp, my insides rent asunder by the backed-up pressure.

Dig this. I had almost glued my own arse shut!

Niall Grimes, Irish by birth, is 6’3″ with a plus-two ape index. He has climbed for over 25 years and is by now well used to the mutterings of little people.