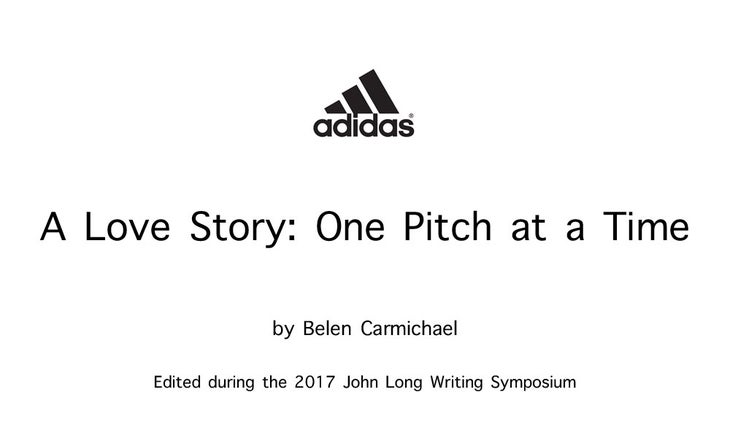 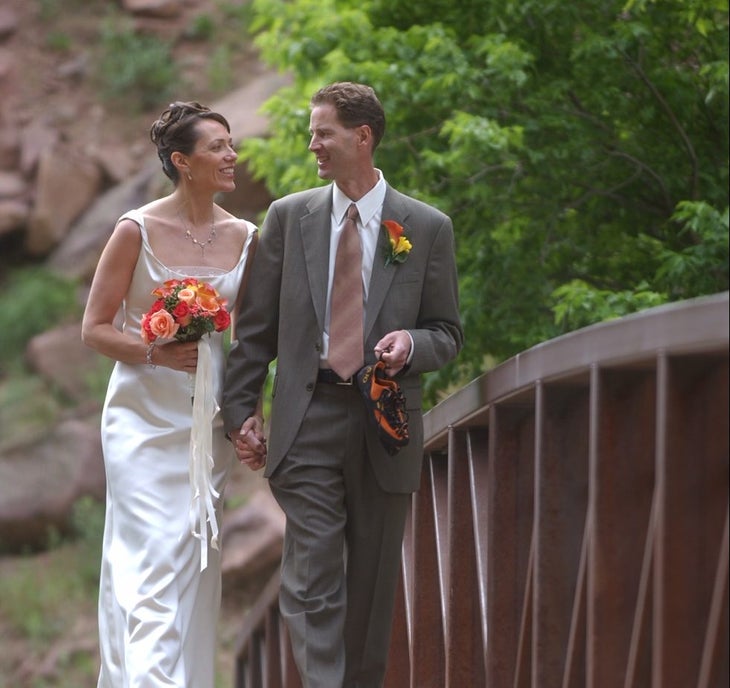 Surrounded by 180 degrees of massive granite, with South Boulder Creek as background music, under a bluebird sky in Eldorado Canyon, two climbers said, “I do.” With 70 in attendance, the ceremony was interrupted several times as climbers walked through on their way to Redgarden Wall. We heard climbing teams call out commands, as we toasted this epic day near The Bastille. Less than 24 hours later, we returned to Eldo and “tied the knot” on the four-pitch climb Calypso (Pitch 790).

Randy and I had met six years earlier after I answered his no-photo, seven-line personals ad:

“The Best Things in Life”

Certainly include friends, fun, fantasy, and passion. Tall professional DWM, 37, all-American looks, two girls part-time. Seeks honest, confident, adventurous, free-spirit who knows how to have fun even on a cloudy day. Your mom and best friend will approve!

Randy and I loved being active and enjoyed spending time outdoors and in the mountains together. From the beginning of our relationship, I admired Randy’s physical abilities, adventurous spirit, confidence, courage and kindness. Randy participated in at least nine physical activities and excelled at mountain biking, skiing, wind surfing, golf, tennis and rock climbing. He had skied since age 6 and volunteered with the Loveland Ski Patrol for seven years. Many weekends we spent alpine skiing in the winter and rock climbing in the summer. We became partners in climbing and life.

We climbed our first pitch together at Paradise Rock Gym in Denver when we celebrated Randy’s 40th birthday. I gifted Randy a day at the climbing gym after I took a climbing class to see if I liked it. I did. Randy had climbed in the late ‘70s but stopped when the climbing got dangerous. At the time he quit, none of his partners had cams or sticky-rubber shoes, chalk was frowned upon and they used hip belays. In Randy’s words, it was “truly the age of hard men and hard women.”

Rock climbing became Randy’s number one physical activity, and I tagged along for the climb. He loved the focus of climbing and used rock climbing to reduce stress. Randy said that when he climbed, he had to concentrate on the next move, getting to the top, getting down to the ground in one piece, and not about anything else. I believed he needed to climb, as much as he needed to breathe. Randy loved to climb and created an email address, goclimb511, to denote his aspiration to climb that grade. We took numerous trips to crags in Colorado, California, Utah, Wyoming, Nevada, Oregon, New Mexico, South Dakota and the Netherlands. For our rock climbing honeymoon we went to France.

Randy encouraged me when I climbed and helped me challenge my fears, but didn’t push me to do climbs too far above my abilities. I think he was worried that if he pushed me too much, I wouldn’t climb with him anymore. I wasn’t so much concerned about what route we were going to do, but about spending time outside with the one I loved. My love for Randy grew with each pitch we climbed. 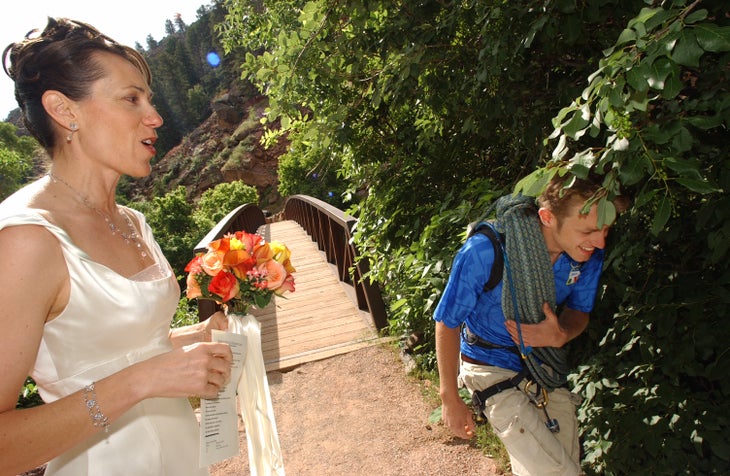 On our honeymoon in 2003, Randy and I climbed a glassy, limestone, three-pitch 6b (5.10d) at an inlet near Cassis, France. A boat dropped us off at the beach, and planned to pick us up around 4:00 PM to take us back to town. We navigated to the cliff and climbed to the top in blistering 95-degree heat. By the time we finished it was late afternoon and time to hustle down to the beach to catch the last boat of the day. We rappelled and scrambled down within 15 minutes, and made it back to the vessel with five minutes to spare. 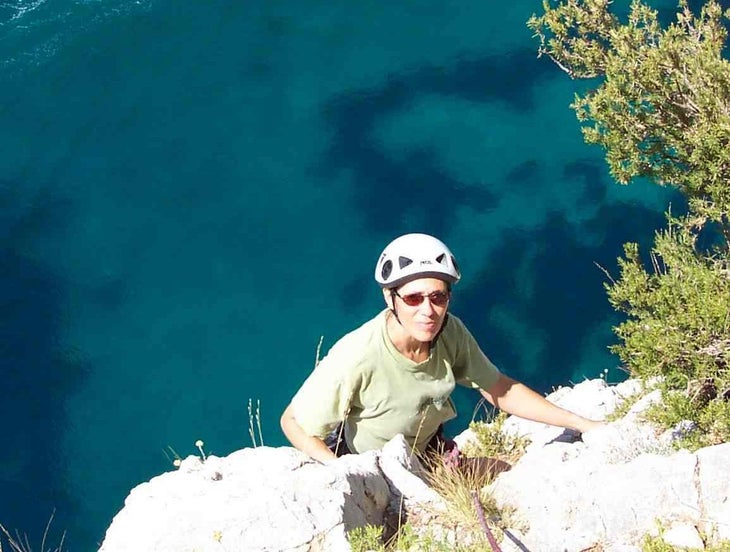 Randy and I, along with our friend Pete, made the first ascent of 69.5 Crack in the Table Top Area at Golden Cliffs, CO. We didn’t set out to find a new route. Between Randy’s poor route-finding skills and guide for the Table Top Area which was a little blurry, this 5.8 route found us. How surprised we were to learn that we had climbed a new route.

Safety was a central theme in Randy’s life—with climbing and computers. Randy worked as a computer security director for a large investment firm in Denver. In his free time, he developed a software program called Psyberscan. The primary purpose of this program was to make the Internet a safer place. Randy also published online “101 Ways to Live while Rappelling,” that gets a few hits a month. I felt safe and confident climbing with Randy. He was my number one partner, and I had only roped up with a handful of others since I started rock climbing.

We climbed the first pitch of the Bastille in Eldo on our fifth anniversary in 2008. For many years, Randy had a lot of anxiety about climbing this “easy 5.7 1st pitch,” as he called it in his climbing log. “Several foot holds at the crux are complete glass from traffic,” he wrote, “but overall it protects well, and the finger locks in the crack are positive. After the crux traverse, the hand jams are perfect.” I smiled as he told me I did a super job through the crux.

In January 2012, our lives and our days spent rock climbing were interrupted when the doctors diagnosed Randy with a treatable, low-grade bladder cancer. Randy set up a website on CarePages called “myclimbtohealth” and posted his progress to family and friends. Randy fought the challenges that came with living with cancer. He stayed active as much as possible in between day-long treatments, weekly trips to the hospital and nauseating rides in the car.

We climbed East Face, Far Right at The Dome, in Boulder Canyon in March 2012. Randy had recovered from a non-invasive surgery and felt good enough to do an easy climb. He beamed and looked full of life!

In June 2012, Randy spent ten days in Yosemite and climbed 41 pitches with his best buddies. He told me how energized he felt when he slept on the ground at night and climbed during the day; he felt at one with nature.

When Randy returned from Yosemite, we focused on his cancer treatment options. Over the course of 15 months, I drove over 2,200 miles in the car back-and-forth to Denver for medical appointments, while Randy reclined in the back seat with a barf bag in hand. Randy struggled with low body weight, proper calorie consumption, nagging physical discomfort, gnawing pain, brain fog and anxiety about his mortality. Randy meditated to help control the pain, took heavy pain meds, and tried pot to increase appetite and reduce pain. The pot made him feel too “out of it,” and he stopped. I encouraged him to paint and draw because that helped divert his mind away from the pain. He spent hours working on his computer while propped up on the sofa. Randy and I remained positive that divine and perfect healing was within reach. We found joy in each day, but at night I tossed and turned in bed like a spastic rotisserie chicken. 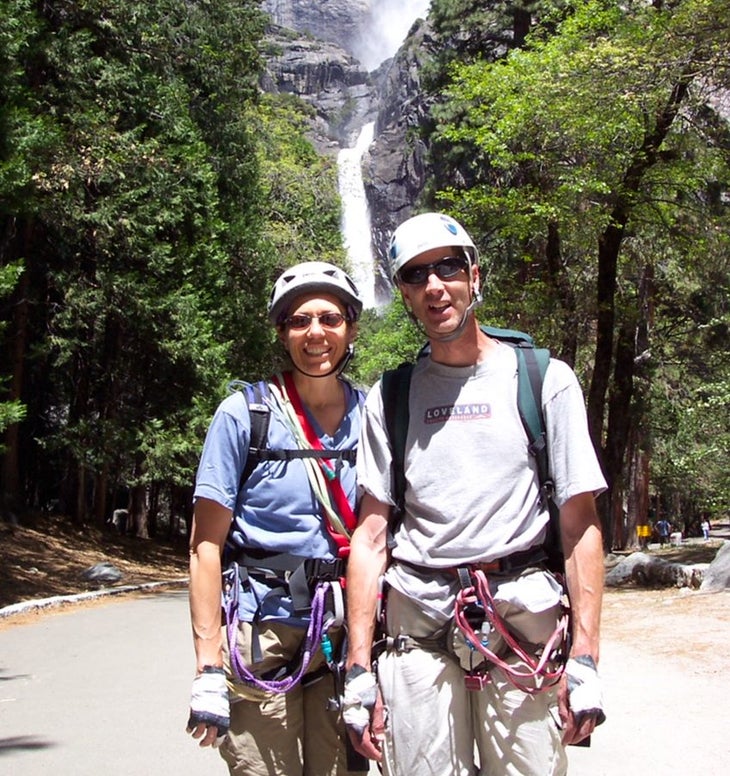 We celebrated our 10th anniversary in Eldorado Canyon, on June 13, 2013. That day, we left our climbing gear at home. With the help of his walker, Randy walked across the bridge to the place we stood ten years earlier. We recited our vows as the creek water rushed in the background. This time, no climbers interrupted the intimate ceremony. One guest, not 70, attended. At home, we toasted our anniversary, our love and our life together.

In July, the CT scans showed the cancer had spread to other areas of his body. Over the next two months, Randy’s health declined. I rearranged the furniture in our home to help him get around more easily with the walker, and later with the wheelchair.

After 20 months, three surgeries, two trial chemotherapy treatments, radiation treatments, many alternative therapies and a week that seemed like a month in hospice care, Randy stopped breathing. He died with me by his side. I felt relieved his suffering had ended, although I thought Randy would beat the cancer and “climb to health.” I expected to grow old together, and climb together again. But that didn’t happen. I’m so glad Randy took that one last big trip to Yosemite.

About a year after Randy’s death, I sold most of his trad climbing gear. A climbing friend helped me sort through it, and I kept a small rack. I couldn’t part with all of his gear—his helmet hangs in the garage along with the hangboard over the door jam, and I have three boxes of climbing books that I can’t seem to part with. For now, these items take up space in the garage, all reminders of the husband I loved.

Randy crossed over three years and 10 months ago. He was a gentle soul full of compassion, love, kindness, smarts and a curiosity for life. He was a loving father of two beautiful girls and a talented computer security geek. He was a modern-day renaissance man and was the love of my life—my Soulmate. Without a doubt, “the best things in my life” were the 16+ years I spent with Randy.

I sometimes imagine that he is on a long climbing trip, and he will walk through the door any day now. I see myself giving him a big hug and a few kisses, then listening to him tell stories about his climbing adventures. With excitement in our eyes, we then start to plan our next climbing trip.

To date, I’ve climbed only twice since Randy’s death: once at Golden Cliffs to repeat 69.5 Crack with borrowed shoes and harness, and the second time during my trip to Carbondale with a group from the John Long Writing Symposium, as I worked on this piece.

Belén Carmichael participated in the the 2017 John Long Writing Symposium, an annual writing workshop run by Rock and Ice.