(all materials copyright by Grivel)

Founded in 1818, Grivel is a pioneering brand at the foot of Mont Blanc in Courmeyer, Italy, where after 200 years it continues to produce innovative rock, ice and alpine gear including the 200 Ice Axe and the 200 Rucksack. The 200 Ice Axe and Rucksack speak to Grivel’s long history, and embody the quality and craftsmanship of climbing’s original gear manufacturer—and both can be yours for participating in Grivel’s 200-Year Anniversary Photo Contest.

1. Post your photo(s) of Grivel equipment in use on a climb HERE. You may post as many photos as you wish. Include basic photo information such as the climb name, location and the climber’s name in the Woobox submission box. Watermarked photos will not be accepted. Be sure to include your email in the Woobox form so you may be contacted in the event you are a finalist or a winner.

All photos of Grivel gear in action on rock, ice or in the mountains are welcome.

3. After the deadline, a Grivel representative will choose the best photo and award the Classic 200 Ice Axe and 200 Rucksack to the winner. Winner will be notified within 30 days of contest deadline. 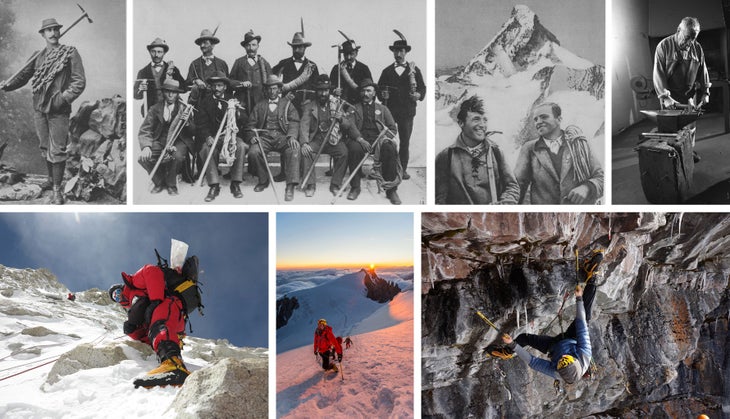 In 1818 the Grivels, a blacksmithing family in Courmayeur, Italy, a small village perched on the southern slopes of the Mont Blanc massif, began adapting farm tools for use in the mountains. Crystal gatherers and chamois hunters were by then guiding tourists up the high peaks of the Alps, and found their traditional alpenstocks, wooden poles as long as eight feet with metal spikes on one end, inadequate. They needed better equipment for hard snow and glacier ice. Around that time some of the guides passed through Les Forges, the neighborhood of Courmayeur where the Grivels wielded their bellows and hammers, and together the guides and smiths modified pickaxe designs into ice axes, with an adze for chopping steps in hard ice. The golden age of alpinism was in full swing and the Grivel smiths and their successors would play starring roles in the development of the sport for the next two centuries, their tools and inventions being used on pioneering ascents in the world’s great mountain ranges.

In the early 20th century, the Grivel family fundamentally changed ice and alpine climbing by advancing crampon design. Since Whymper’s climb of the Matterhorn in 1865, many mountaineers had favored boots with cleats or nails driven into the soles over the ineffective crampons of the day, which were little more than iron spikes strapped to the insteps of boots. The “nailed” boots provided just enough traction to balance up and down steps hewn into the ice by their guides. Imagine trying to climb the frozen ice gullies of Mt. Washington or the iron-hard ice couloirs of the Sierra without crampons—the labor of chopping hundreds to thousands of steps would put most people off mountaineering forever.

British engineer and climber Oscar Eckenstein had a better idea. In 1909 he teamed up with Henry Grivel in Courmayeur to forge the first 10-point crampon. Armed with such a tool, “It is very rare that one encounters an ice passage where it is necessary for a good ice climber to cut even the barest number of steps,” Eckenstein wrote in an Austrian Alpine Club publication.

Yet the 10-point crampons weren’t quite enough of a technological leap to convince all climbers to abandon their hobnailed boots. It took another innovation 20 years later, when Laurent Grivel, Henry’s son and a Courmayeur guide, added two front points to the family crampons, before their advantages became crystal clear. In perhaps one of climbing’s most pivotal ascents, that of the first ascent of the North Face of the Eiger in 1938, two climbers armed with front-points, Anderl Heckmair and Ludvig Vörg, outpaced their ropemates Heinrich Harrer who struggled in hobnailed boots, and Fritz Kasparek, whose crampons lacked frontpoints. Such was the performance of Grivel’s frontpoints that when Harrer looked down at an endless ladder of steps he’d cut in to the ice and saw Heckmair and Vörg racing up in their frontpoints, he “saw the New Era coming at express speed.”

Ice climbing equipment continued to improve through the 1960s, though few climbers sought out steep ice for its own sake. That changed with the development of shorter axes and drooped and curved picks on ice tools. By the mid-1970s, long vertical ice climbs such as Bridal Veil Falls in Colorado and the Widow’s Tears in Yosemite Valley had opened climbers’ eyes to radical new possibilities—both for one-day climbs and for even steeper routes in the highest mountains. By the 1990s, even vertical ice wasn’t enough of a challenge for top climbers, and in Colorado, Canada, and Europe, climbers began dry-tooling up overhanging rock alongside the steepest ice pillars—modern mixed climbing had begun.

Many Grivel innovations helped speed the evolution of modern ice and mixed climbing: forged front points and monopoints on crampons, a radical bend in the shaft of ice tools, and a hand grip specifically designed for leashless climbing. And it’s not just the shape of the tools that changed—materials evolved as well, from the wooden ice axes of the early days to today’s ultralight carbon composite shafts, and from clumsy crampon straps to high-tech plastic bindings that fit boots of all types.

As Grivel enters its third century in business, top ice and alpine climbers including Steve House and Angelika Rainer (the first woman to dry-tool D15) continue to drop by the Courmayeur plant—now powered by solar energy—and share their ideas on climbing techniques and technology. Whatever comes next in the future of alpinism, Grivel innovations are sure to help lead the way. 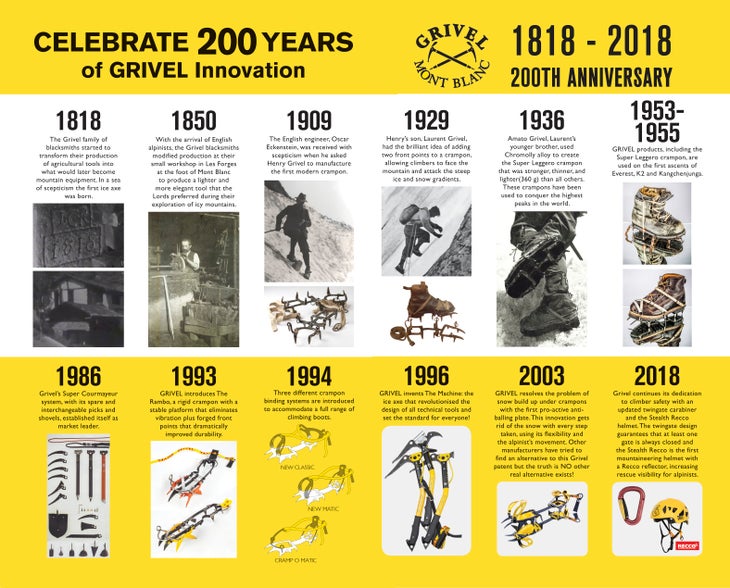 THESE OFFICIAL RULES AND THE INTERPRETATION OF ITS TERMS SHALL BE GOVERNED BY AND CONSTRUED IN ACCORDANCE WITH THE LAWS OF THE STATE OF COLORADO WITHOUT REGARD TO ITS CONFLICTS OF LAWS RULES. For any matters that are not subject to arbitration as set forth in these Official Rules and/or in connection with the entering of any judgment on an arbitration award in connection with these Official Rules and/or the Contest, the parties irrevocably submit and consent to the exclusive jurisdiction and venue of the state and federal courts located in the State of COLOLRADO. The parties agree not to raise the defense of forum non conveniens.
16. Use of Data. Grivel s.r.l., Liberty Mountain Sports, LLC and Rock and Ice will be collecting personal data about entrants online, in accordance with their privacy policies.