Ian Nielson on Indecent Exposure (5.11c) at Blue Sky. The sustained, cerebral line is one of the area’s some 800
limestone sport routes.

THE FIRST DEVELOPERS were sworn to secrecy. They hid their cars, stowed ropes out of sight, and stayed off the trails. They avoided canyon homeowners, Forest Service personnel and other Black Hills climbers. They even generated a decoy crag with mostly short routes on lesser-quality rock down canyon to deflect attention. No one was to know that Spearfish Canyon, South Dakota, held a wealth of steep, beautiful, bomber lines—over 800 limestone routes, twice as many, for example, as in Rifle, Colorado, would eventually appear here.

The project began with Pete deLannoy, a chemistry professor at Black Hills State University, who grew up climbing the crystalline granite Needles of the southern Black Hills around Mount Rushmore and Sylvan Lake. Around 1990, he began feeling trapped by the traditional ground-up ethic that had long governed the granite. Gravitating toward rap bolting, he spent time on the limestone in Colorado and Utah, and with Paul Piana and Todd Skinner established sport routes at Wild Iris in Wyoming. It was then that deLannoy realized the vast potential of Spearfish Canyon, but after his experiences in the southern Black Hills, where sport routes were chopped over disputes about bolting ethics, he was careful about sharing his discovery.

To bolt the first routes, deLannoy conscripted a few trusted allies, who also discovered walls throughout the canyon and went to work themselves. While deLannoy developed the Mohican crag, Nate Renner and Greg Parker worked at Blue Sky, Mike Cronin at the Big Picture Gully, and Mike McNeil at Sunshine.

“The diamond in the rough was slowly being cut into a magnificent gem,” says deLannoy. Rapping in with power drills, the crew humorously called Spearfish Canyon the “Freedom Zone.” 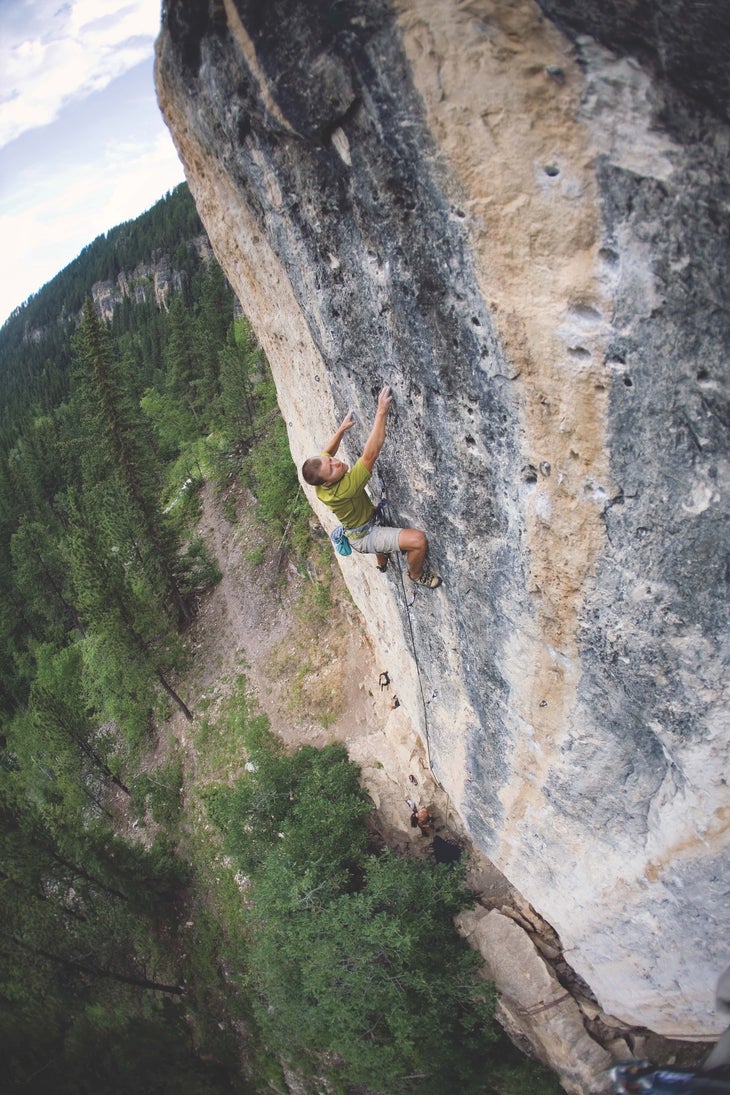 A few years into the canyon’s development, a homeowner notified the Forest Service, which knew nothing of the climbing.

No one was to know that Spearfish held a wealth of steep, bomber lines—over 800 limestone routeswould eventually appear here.

Cronin and the other climbers scrambled to hide chainsaws, pick axes, drills and other hardware, faced the ranger, and acknowledged the route development. The ranger was shocked by the sheer number of routes he saw, but agreed that the work was being done responsibly and simply warned the climbers that bolting could be a problem and to use caution.

Years went by without another incident, and in time deLannoy left the Spearfish area, though development of the canyon continued. In 2000, area climbers organized an Adopt-a-Crag day, an event that pushed the Forest Service too far: Climbers were fined $1,000 for building trails without a permit. The confrontation did, however, force climbers and the Forest Service to have their first real conversations. Today the two groups have a solid working relationship and join forces to address issues such as parking.

With the developmental wrinkles ironed out, other climbers, including the locals Jamie Coin, Lee Terveen, Joel McKillop and Brent Larson, pitched in, and today new lines go up every season on what is typically slightly overhanging limestone sprinkled with two-finger pockets and crimps. More vertical, technical climbing runs throughout the canyon, at Blue Sky and The Asylum, where good footwork and efficient sequencing are the order of the day. If slabs aren’t your thing, move along to the overhanging walls and roofs of Thunderhead or the Botany Bay amphitheater, where you can get your pump on in 100-foot cave routes.

If you’d like to explore further, an hour away is yet another sport destination, discovered by Cronin in 2007. The overhanging walls of Victoria Canyon, or the “VC,” are also quality limestone, but differ from Spearfish with bucket ladders and Rifle-like movement on pinches and kneebars. The combination of Spearfish Canyon and Victoria Canyon makes the Black Hills a worthy destination. 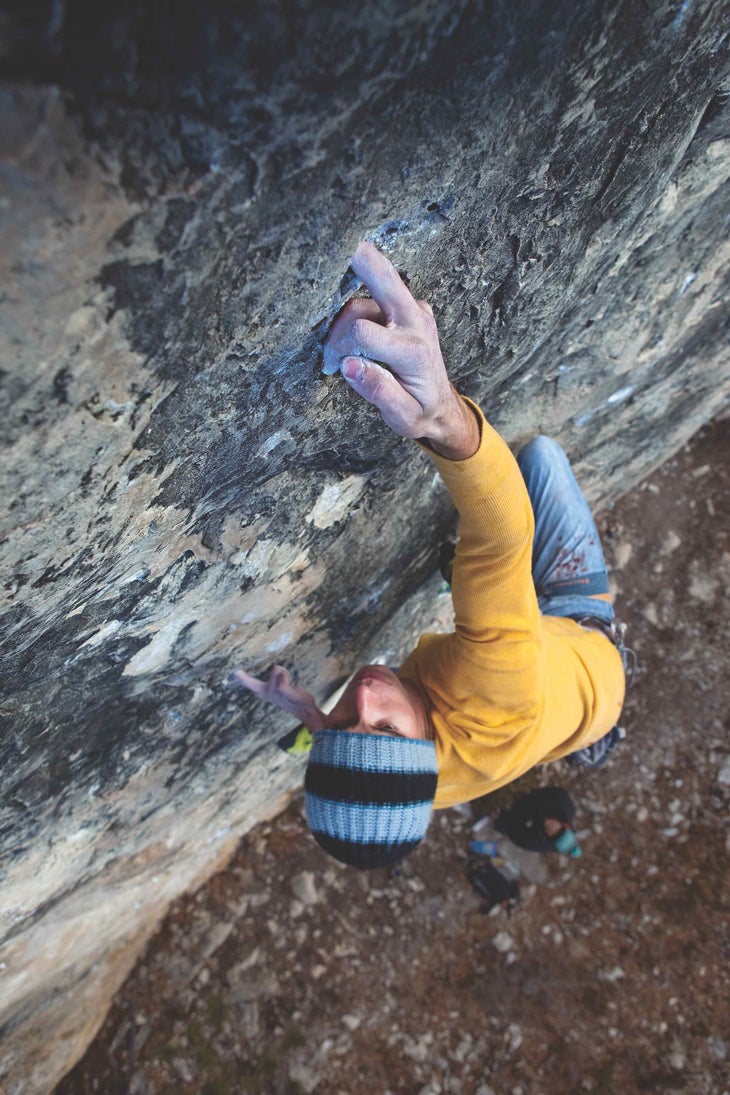 WHERE/OTHER AREAS
Spearfish’s location in the northern Black Hills makes it easy to tack on during a visit to other crags in South Dakota, Montana and Wyoming. The most popular nearby areas are Ten Sleep Canyon, just three hours away, and Wild Iris, around five hours. Devil’s Tower, Wyoming, is just an hour and a half west. The exquisite crystal-covered granite (with both trad and
bolted routes) of Mount Rushmore and Custer State Park is an hour and a half south.

GUIDEBOOK
Spearfish Canyon, The VC and other Black Hills Limestone (2011), by Mike Cronin. 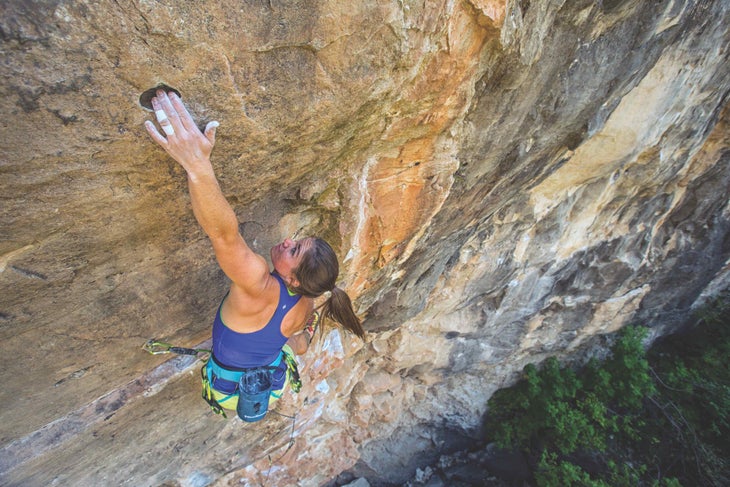 BOTANY BAY
WHERE: Five minutes from the road.
CLIMBING: Long, steep routes of roof-after-roof-pulling. Many huge, open-handed holds.
SUN EXPOSURE: Morning sun, late-afternoon shade.
RECOMMENDED ROUTES: Around the Horn (5.12a), 13 bolts of solid, continuous climbing with an airy arête finish. Botany Area has an abundance of mid- and hard 5.13s.

MOHICAN/BIG PICTURE GULLY
WHERE: Across from Blue Sky. Two of the most popular climbing areas in the canyon. (Moving up-canyon nearby, you will also find the newly developed Asylum and 7 Deadly Sins wall, with long, vertical-to-slabby lines and many thin, hard routes.)
CLIMBING: 5.8 to 5.13.
SUN EXPOSURE: First sun, with shade between noon and 1:00 p.m. in the summer.
RECOMMENDED ROUTES: Mohican: Yippey-Kiy-Yay (5.10b), an overhanging jug-haul up an arête. Pocket-pulling masterpieces include Blood Brother (5.12a) and Battle Cry (5.12c). Big Picture Gully: Delightful moderates and stellar hard routes. Everything’s Big in Texas (5.10a), the Glamrock Wall’s Winger (5.11b), an 11-bolt pocket funfest; and the celebrated Big Picture Wall, hosting Quest for Fire (5.12a), First Blood (5.12c) and Raw Justice (5.12d).

DARKSIDE
WHERE: Southernmost area on the east side of the canyon.
CLIMBING: Long routes with ample holds and features.
SUN EXPOSURE: The only fullshade area. Prime summer crag.
RECOMMENDED ROUTES: Concracktion (5.11c), Tough Love (5.13a).

DANKS
WHERE: Across canyon from Shadowlands.
CLIMBING: Newer area with a cache of fun lines.
SUN EXPOSURE: Capitalize on the shade by starting at Shadowlands, then chase shade over the Danks.
RECOMMENDED ROUTES: Mary Jane (5.11b), big moves on big holds. Too Drunk to Huck (5.12c), long with positive sidepulls and underclings.

VICTORIA CANYON, VICTOR CHARLIE/CHINA WALL
WHERE: Ten minutes outside of Rapid City (40 minutes from Spearfish) off Sheridan Lake Road.
CLIMBING: Technical, vertical rock gives way to grotto with huge pockets and edges. 100 routes with a concentration of 5.12s and 5.13s, but also moderate, vertical lines.
SUN EXPOSURE: Sun and shade alternate on either side of the canyon throughout the day. Climb all day long—even when it’s hot.
RECOMMENDED ROUTES: Victor Charlie Wall: Bucket Head (5.12b), Steep & Cheap (5.13a) and Ninja Please (5.13c). China Wall: Mogo Chaji (5.12a) and the beautiful streaked Thin Red Line (5.13b).

Allison Coin lives in Spearfish with her husband and their two children.