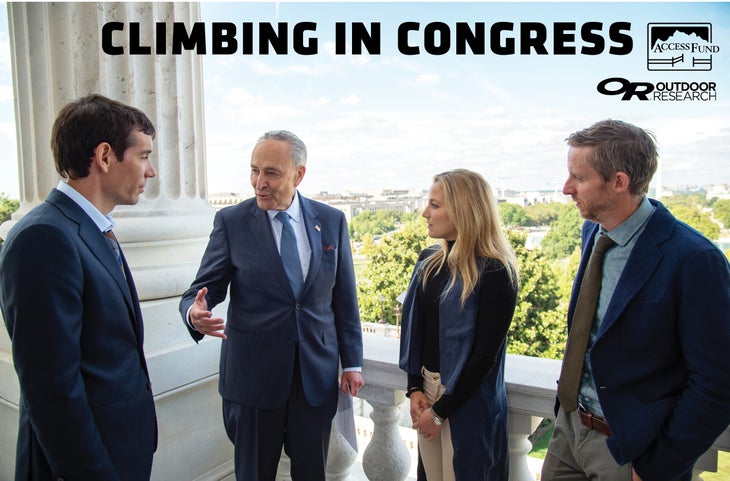 Photo: Will Newton.
Sponsored By

The Access Fund and the First Climbing Law in U.S. History

It’s no secret that the sport of climbing has hit the mainstream. Rock climbing makes its debut in the Olympics next year. Free Solo recently became the first climbing film to win an Oscar; it and the Dawn Wall captivated audiences both inside and outside the sport. Figures like Jimmy Chin, Alex Honnold, Tommy Caldwell, and Adam Ondra are household names (don’t lie, your grandmother has mentioned at least one in the last year). The United States saw 50 new gyms open in 2018 alone, according to the Climbing Business Journal. While the majority of this growth is indoor and competition climbing, more climbers than ever before are venturing outside, too.

Although Access Fund estimates that nearly 60% of the 30,000 or so crags in the United States are located on public lands, only 7% are in designated Wilderness. At first glance, Wilderness climbing might seem like a waning demographic. Are you picturing hard-nosed, leathery men and women on alpine FAs? Guys your dad’s age leading 5.6 multi-pitch choss piles 300 miles from the nearest parking lot? If so, you’re wrong. Federally designated Wilderness regions are home to many of the most iconic and popular American climbing spots: Joshua Tree, El Capitan, Zion, Red Rocks, Black Canyon, Canyonlands, Linville Gorge, and the Red River Gorge (the list goes on). Unfortunately, this often brings a disproportionate amount of traffic into these Wilderness regions, and the numbers are only growing.

In the fight to protect and secure access to American Wilderness climbing, no organization spends more time in the trenches than the Access Fund. While the nonprofit has been active in advocacy and lobbying for almost 30 years, 2019 marks the first time the Access Fund has been successful passing a piece of U.S. legislation which mentions climbing. There have been Wilderness designations that mention climbing in the past but never before has a federal law explicitly mentioned and protected climbing activities. All that changed with the passage of the John D. Dingell, Jr. Conservation, Management, and Recreation Act in March. 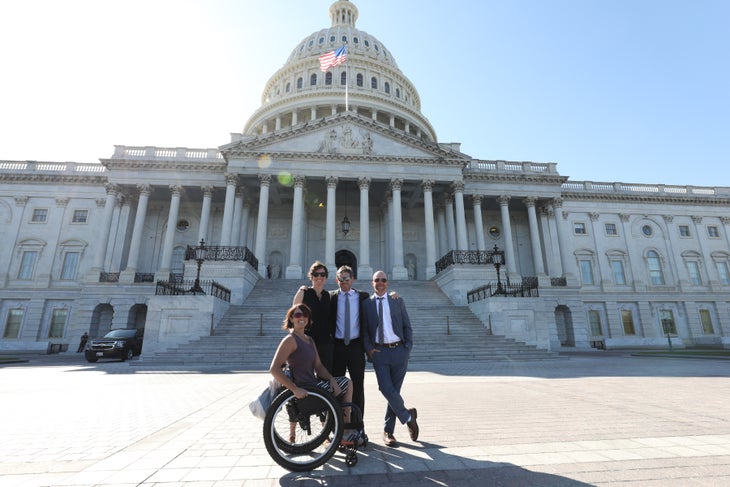 The Dingell Act consists of over 100 individual bills, and includes several major protections for Wilderness regions containing climbing, such as the Organ Mountains Desert Peaks National Monument in New Mexico and Methow Headwaters and Mountains to Sound Greenway in Washington. Overall, the act designates over 2,000,000 new acres of recreation, conservation, and Wilderness. The Access Fund’s pride and joy, however, is the Emery County Public Land Management Act. A principal component of this legislation is the protection of Utah’s San Rafael Swell, home to over 500 climbing routes, via the creation of nearly 700,000 acres of Wilderness. The Emery County Bill, which has been in the works on the Access Fund’s end for the better part of six years, specifically protects “Recreational Climbing.” The subtext of the “Recreational Climbing” header states:

Nothing in this part prohibits recreational rock climbing activities in the wilderness areas, such as the placement, use, and maintenance of fixed anchors, including any fixed anchor established before the date of the enactment of this Act-
(1) in accordance with the Wilderness Act (16 U.S.C. 1131 et seq.); and
(2) subject to any terms and conditions determined to be necessary by the Secretary.

The above paragraph might not seem like much, but the significance, according to Erik Murdock, policy director at Access Fund, is the legal precedent this text sets. There is confusion about Wilderness climbing access and regulations across the country. Due to lack of precedent in the past, access and restrictions historically have been determined on a case by case basis, in individual battles with individual land managers. Copy from a Q&A on the Access Fund’s website paints a clear picture: …in Red Rocks, Nevada and Sawtooths, Idaho, existing bolts are accepted, but new bolts are currently prohibited. This was also the case in the Superstition Wilderness in Arizona, but that policy changed recently to allow new fixed anchor placements. In other areas, such as the North Cascades, Washington, existing and new bolts are prohibited, but pitons are legal. Bolts are not allowed to be placed at all in the Buffalo River Wilderness in Arkansas. Now, the legitimacy of climbing as a valid usage of Wilderness is confirmed in law, and advocates like Murdock and the Access Fund have a beacon in the Dingell Act.

“Now we have a law we can point to,” said Murdock. “Now there’s a law that says wilderness climbing is appropriate, and climbing activities including maintenance are appropriate. So when a land manager is questioning ‘Is this even legal?’ we can point to this law. When we work in North Carolina or Arizona or Washington, we can always direct land managers, whether they’re at the BLM, Forest Service, or Park Service level, and say ‘here’s a precedent.’”

The Dingell Act’s sponsors, Utah Congressman John Curtis and Senator Orrin Hatch, were critical in the fight to get the Emery County Bill through Congress. The Wilderness Society also played a key role, coordinating with the Access Fund and other proponents to craft mutually beneficial legislation.

“From day one, Access Fund has been an important partner in advancing the Emery County Public Land Management Act,” says Congressman Curtis. “Their staff approached us wanting to solve problems facing our public lands and ensure climbers had a voice in that process. They advocated to clarify the treatment of climbing activities in designated areas, and as a result of their hard work, climbers will be able to enjoy the world class recreation in Emery County, Utah for years to come.”

It might seem surprising that someone like Senator Hatch, who supported the reduction of Bears Ears, would work with the Access Fund on the Emery County Bill (or that the Access Fund would work with him), but nonpartisan work is key to success in these endeavours, according to both the Wilderness Society and the Access Fund. “Sometimes you have to put aside your differences,” said Murdock. “We took a lot of backlash from the climbing community, a lot of people were angry that we were working with Hatch’s office. We don’t agree with everything he stood for, obviously, but we recognized that there was such potential in protecting the public lands in Emery County, and protecting climbing, and getting a good bill written, that we put aside our differences and got to work. We agreed to disagree on certain issues, but after spending a year negotiating, you realize that there are a lot of things to agree on.” 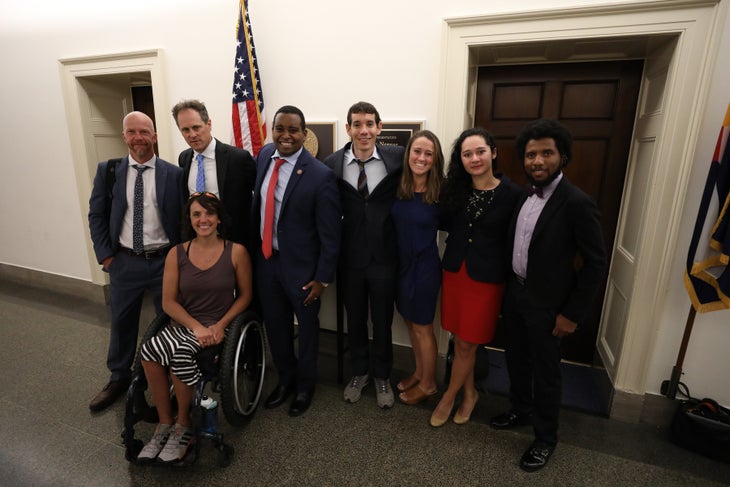 In the eyes of detractors, one outcry is: Isn’t this legislation leaving Wilderness wide open to bolters of fortune? Does this mean climbers can go bolt-crazy? And sure, in an era where anything more than a five-foot gap between sport bolts is often deemed “runout,” this concern might seem valid. But “Wilderness designation,” according to the Emery County Bill, doesn’t mean you bolt wherever you want in San Rafael Swell (and motorized drills in Wilderness are illegal regardless). The bill simply will not outright “prohibit the maintenance of existing bolts, the placement of new bolts, and other climbing activities,” but all only subject to Bureau of Land Management (BLM) rules. Climbers still need to follow standard wilderness bolt authorization procedure. “We want to keep climbers safe with regards to fixed anchors, but not proliferate and see them on every single surface, open up any massive new multi-million bolt climbing routes.”

Although the Access Fund and Wilderness Society were instrumental in the Dingell Act’s success, it wasn’t passed solely thanks to the efforts of lobbyists in Washington. Access Fund members and supporters sent over 10,000 letters of support to their elected representatives throughout the process. But the fight isn’t over. Nationally, Wilderness is simultaneously becoming more heavily trafficked as it is shrinking in size, and other more sinister factors are contributing to a denigration of public lands.

“Climate change is the single greatest threat to wilderness usage,” said the Wilderness Society’s Michael Carroll. “That’s true whether you’re a climber or a conservationist or someone goes to the park for a picnic once a year. The climate crisis is impacting public lands in a way we haven’t even grasped yet. Right now 40% of emissions in this country come from federal public lands. Public lands should be focused on ending the climate crisis, not adding to it.” Carroll says a nationwide initiative is next on the Wilderness Society’s plate to make public lands part of the solution. From a climbers perspective, Murdock took a different tack. He sees the biggest threat to wilderness climbing as coming from within. “It’s the increasing number of climbers,” he said. “Climbers need to recognize that not all climbing areas are the same. When we venture into designated Wilderness, we have to abide by Wilderness rules, values, and ethics. That’s the biggest threat to wilderness climbing: overcrowding and educating climbers on how to climb in wilderness in a way that is sustainable and respects other wilderness users.” 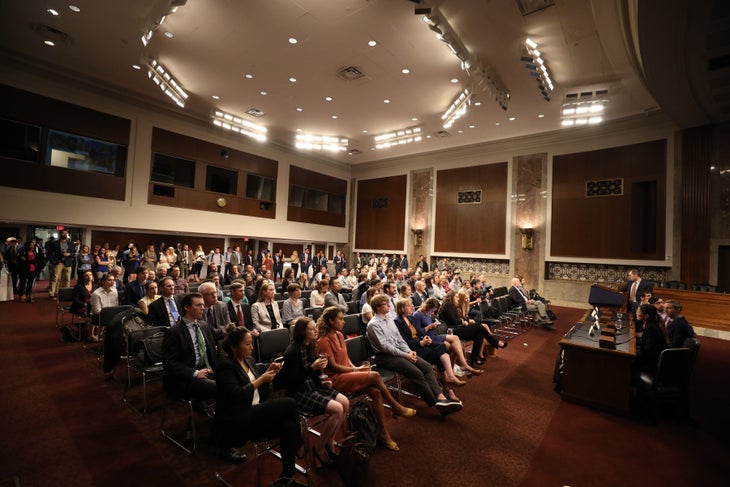 Moving forward, the Access Fund sees the Dingell Act as the spearhead of a national legislative push. Murdock noted two bills currently in the works that benefit directly from the language in the Dingell Act. The Northwest California Wilderness Recreation and Working Forest Act, sponsored by Congressman Jared Huffman, plans to create Wilderness areas over existing climbing, ensuring their protection. “We hope to get the exact same language in the Colorado Wilderness Act,” he said, sponsored by Congresswoman DeGette. “We’re trying to get this language in any bill where climbing and wilderness are at play.” In the latter bill, proposed protections of 25,000 acres on Assignation Ridge and 27,000 acres on Table Mountain list “rock climbing” as a primary recreational activity in the areas.

20, 30, 40 years on, it’s not clear what access will look like. Perhaps organizations like the Access Fund will have to change tack in response to increased usage. But climbing is written into law now, so the next time a land manager questions what you’re doing with ropes and draws out on the rock, pull out your copy of the Dingell Act and show him the law (respectfully, of course).

Protect Public Lands By Donating to the Access Fund Now!