In late August last year the professional climbers Madaleine Sorkin and Kate Rutherford were climbing in the Wind River Range, Wyoming, when a climber died in a rappelling accident. Michael Sullivan, aged 54 from Durango, Colorado, fell around 600-feet after he lost his footing while unroped at a rappel station on Steeple Peak. With no means of communication his climbing partner had to hike a considerable distance until she chanced upon Sorkin and Rutherford who had a satellite phone with which to call for help.

Sorkin and Rutherford walked out with the climber, who was on a trip funded by an American Alpine Club (AAC) Live Your Dream grant. Sorkin was struck by how sad and incongruous this was given the traumatic event that had just occurred.

“I thought there was some irony in that,” says Sorkin, “just thinking about athletes that are supported by companies to go do these bold things, but where’s the support after people don’t return?”

The sadness of the situation stayed with Sorkin over the following months: “I kept thinking about it myself and then after that I felt really impacted by Hayden [Kennedy] and Inge [Perkins’] deaths … and Quinn [Brett’s] accident. To me it really brought up mortality and how we support each other.”

It was then that Sorkin approached the AAC to discuss the idea of a grief fund, an intentionally created community resource to help members of the climbing community deal with loss, trauma, grief and change.

The AAC responded enthusiastically and the wheels were set in motion for the creation of a donation-based Climbing Grief Fund.

“We experience loss, we experience unwanted change, and inevitably we all find ourselves staring into the abyss, the void, the BLACK.”

The fund, which will hopefully be available in fall 2018, will initially enable the AAC to build out a comprehensive online resource to help people process and cope with trauma and loss. It is also hoped the fund will be able to offer grants for individuals to undertake therapy sessions, as well as group counselling sessions at existing events like the American Alpine Cragging Classics. Support like this will make a huge difference to the climbing community, particularly as the cost of therapy and counselling is prohibitive to many.

Sorkin hopes that the Grief Fund can develop into a buoyant movement around mental health within the climbing community. Despite the initial resources being directed towards those suffering from loss or from witnessing traumatic events, Sorkin acknowledges that not all episodes of depression, anxiety or struggle that affect climbers are directly related to severe trauma or loss:

“What if you’re just not psyched anymore? … I’m talking about mental health and change and health in climbing,” says Sorkin. “The Grief Fund idea, I personally want it to include things like depression. That’s not what it’s going to be [at the start] but I hope it will grow into that. Build into a resource to help us deal with our darker sides … I feel very optimistic that this can be the beginning of a movement around mental health [in climbing].”

Vickie Hormuth, Director of Strategic Partnerships, says on the AAC website, “This fund is overdue and we hope it will build tremendously over the years through individual, company and organizational donations.” 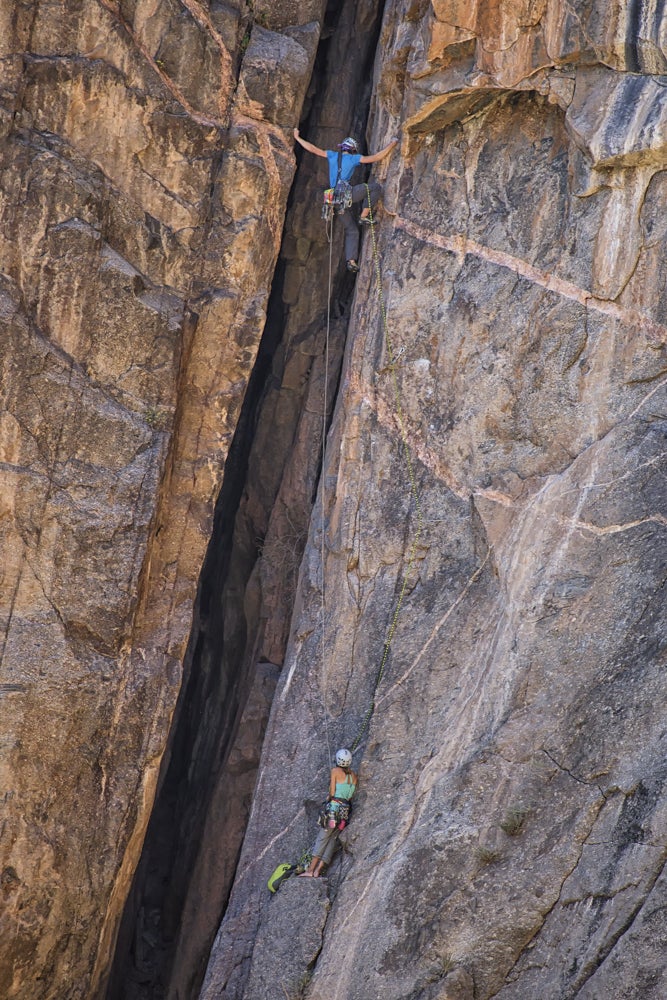 Madaleine Sorkin leading the first pitch of Qualgeist (5.12b) in the Black Canyon of the Gunnison. Kate Rutherford belaying. Photo by Chris Noble @noblefoto.

24 Hours Into The Black

The Black Canyon of the Gunnison National Park is a 2,000-foot deep, river-cut gorge in western Colorado. Famous for its intimidating and serious setting and long and committing routes, the Black Canyon attracts climbers seeking everything from adventure and athletic daring, to a deeper connection and understanding of themselves and their partners through overcoming the challenges of climbing there.

On May 25, Sorkin and Mary Harlan will attempt to link three major formations in the Black Canyon in 24 hours as a fundraiser for the Climbing Grief Fund.

“The Black Canyon is a place that to me really holds the elements of grief,” says Sorkin. “There’s deep gratitude there, there’s sadness and moodiness. It’s a very multidimensional place, mysterious and somber.”

Sorkin approached Harlan, who was in the process of planning a link-up project in Zion, with her idea to climb three Black Canyon routes in 24 hours and was surprised by how quickly Harlan agreed to join her.

Harlan, who is a mother, firefighter and successful climber felt instantly motivated to join Sorkin and use climbing as a way to give back to the community.

“I feel like climbing can be a really self-serving sport—and that’s fine, I do it for my own self-serving purposes—but I also felt like the project was taking an idea that both Madaleine and I have [of free climbing big link-ups] but then doing something bigger with it. That’s the part I was really instantly attached to. It’s something we’re doing for the climbing community, not just for ourselves.” 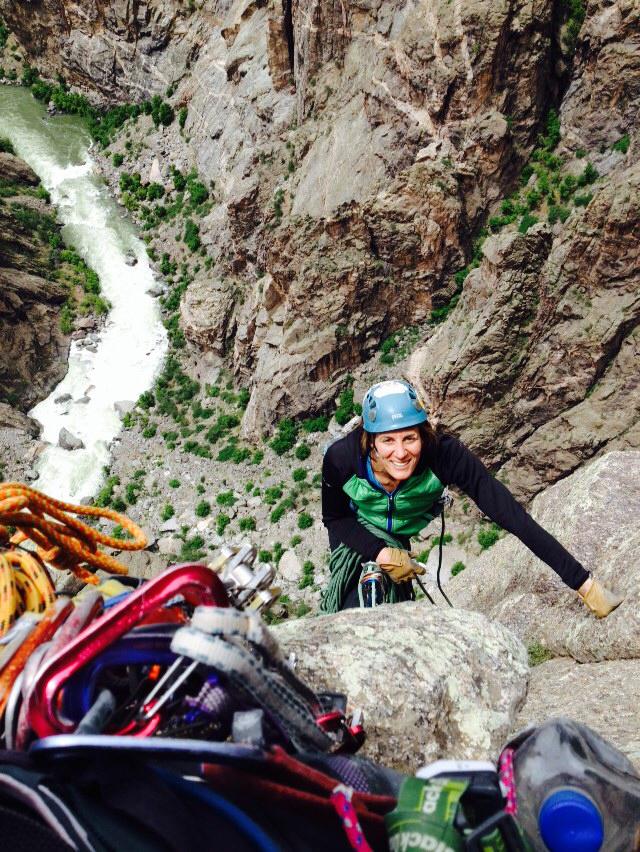 Mary Harlan on one of her many trips to the Black Canyon. Photo by Stephanie Bergner.

Both Sorkin and Harlan are experienced Black Canyon climbers, having tackled challenging free climbs in the daunting canyon. Harlan, based in Carbondale, Colorado, has climbed over 40 routes there.

“It’s been 15 years since my first climb there,” wrote Sorkin on the AAC website, “yet I can still taste the fear bubbling up through my chest, the canyon walls echoing the river below as I hung hundreds of feet from the rim and night crept up over me.”

Many who have climbed in the Black Canyon can relate with that story. Being benighted in the canyon is not uncommon. Loose rock, route finding and poison ivy are just a few examples of the many challenges the Canyon holds, and climbing epics often lurk just around the corner.

All-in this link-up will involve 5,000 feet of climbing, not including the rappels, gulley scrambles and hiking in between. To achieve this within 24 hours they will need to simul-climb most of the pitches.“The goal is to do Scenic in 4 hours … and Astro Dog in about 6–7,” says Harlan. “The project doesn’t hinge on hard climbing. It’s more about the diversity and physicality.”

Indeed, Sorkin is clear that the climb is not about groundbreaking climbing and eloquently articulates the motivation for the link-up on the fundraiser page: “This climb is for the nourishment we can find in the void, in the Black, and for the fierce and gentle persistence to trust life enough to risk returning time and time again.”

“This climb is for the nourishment we can find in the void, in the Black, and for the fierce and gentle persistence to trust life enough to risk returning time and time again.”

The Black Canyon from Exclamation Point. Photo by Megan Janssen.

Donate to the Climbing Grief Fund

To donate to the Climbing Grief Fund please visit the donation website.

Outdoor Research, a sponsor of Sorkin’s who is involved with the AAC, is providing a match of up to $5,000 for all donations made to the Climbing Grief Fund between May 15 and June 15.

“For as long as climbers have been venturing to the mountains, there has always been the unavoidable specter of loss when someone is involved in a mountain accident,” says Christian Folk, director of marketing at Outdoor Research for the Climbing Grief Fund press release. “In general, there has been a lack of conversation around this topic, and a lack of resources when the unimaginable does happen, to help people figure out how to deal with these situations. We hope that this fund will help future victims of loss and grief be better able to cope.”