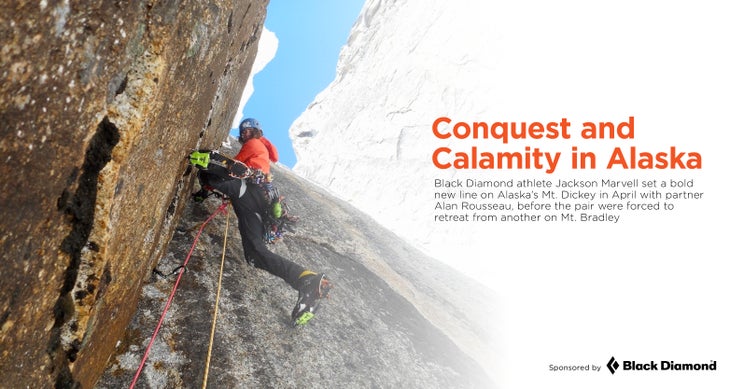 In Partnership with Black Diamond

23-year-old Jackson Marvell and his partner Alan Rousseau were battling up an unclimbed line on Mt. Bradley (9,100 feet) in Alaska’s Ruth Gorge. Fresh off a first ascent on nearby Mt. Dickey (9,544 feet), the pair realized they had one last window to get in another climb before flying home. Now the two were 3,000 feet up Bradley’s north face, with Marvell leading the next pitch 120 feet above the belay. “I was runout probably forty feet,” he said, “and on some pretty techy terrain.” That’s when a shard of ice plummeted from the wall, smashing into Rousseau’s face. It struck the brim of his helmet, then his eye and nose. Marvell saw him get hit and stagger at the belay, before briefly collapsing.

“He’s a pretty tough dude, so he wasn’t saying much,” said Marvell, “and I was so high above I couldn’t really see what was going on.”

Rousseau managed to belay Marvell up another twenty feet of ice Marvell described as “AI6+ R or X,” to a spot where he could place a few #3 Pecker pitons. Then Rousseau yelled, “Give me ten minutes to see what’s up.”

“We’ve gotta go down!” the call echoed from below.

When Marvell got back to his partner, blood was everywhere at the belay. “[Rousseau] was bleeding all over the place out of his nose,” he said, “and he had no vision in his left eye,” he said. “He was in a lot of pain. There was a massive amount of pressure building inside his eye.” They both knew they had to get out of there. 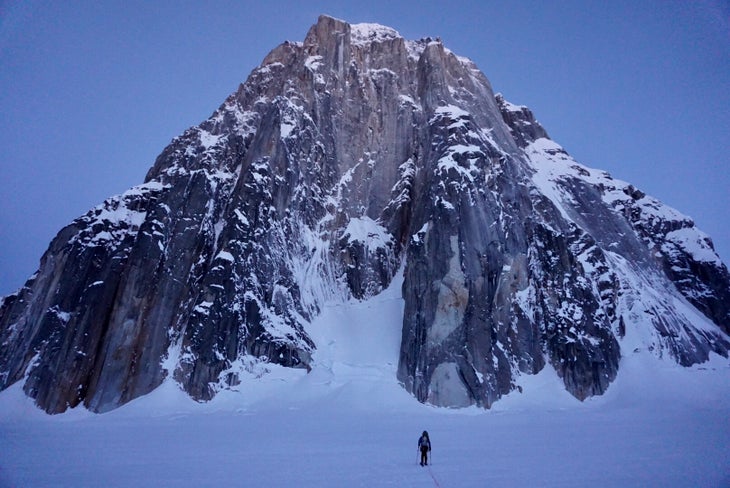 Born in Provo, Utah, Marvell started climbing on rock at 15, before quickly making the leap to ice, buying his first tools a year later. Shortly after his 20th birthday he came up with the scheme to climb 100 desert towers before his 21st, a feat he accomplished with several first free ascents thrown in. Now 23, Marvell, a Black Diamond athlete, is a veteran of multiple Alaskan expeditions, including a 2017 repeat of the legendary Phantom Wall on Mt. Huntington, a route that beat back all comers since it’s 1991 FA by Paul Teare and Jay Smith. This fall, with partners Matt Cornell and Kurt Ross, he tagged the first ascent of the 7,100 meter (23,294 foot) Sherpa Kangri II in Pakistan’s Kashmir.

Rousseau and Marvell flew to Alaska at the beginning of April for three weeks of climbing. They had their sights set on Dickey’s Blood from the Stone (A1 M7 AI6+X 5000’) an east face line set by Sean Easton and Ueli Steck back in 2002, but soon found it too light on ice. Having made a pact not to turn back unless they ran out of food or weather, the pair climbed the rock crux of the route before linking into a new chimney system to the right on their second day. They battled up several ice and mixed pitches of AI5 M6+, then pendulummed into the main chimney. This held the crux, a harrowing 200 foot ice pitch Marvell described as “vertical to overhung nevé just plastered in, with some smeared ice on the right side, which we could only protect with tied-off 10cm stubbies.” After this frightfest, they were rewarded with a frosty tarp bivvy, under constant spindrift and four inches of snow. “My sleeping bag filled with snow and was soaked,” said Marvell, “so I ended up just sitting on my sleeping pad wearing the new Vision parka, which actually performed great.”

The third day they pulled into a second ice tube, another 1,000 feet of ice with an AI6 segment which Rousseau led. The pitch was “overhung like crazy,” with marble-smooth ice. “I had to take like 15 swings to get a good stick,” said Marvell.

Through the second big chimney, they climbed into a snowbowl and rapped over onto Dickey’s northeast face. From there it was 800 feet of simul climbing to the summit ridge through faceted deep snow, placing a piece of pro “every hundred feet or so in marginal blocks.” The pair topped out Dickey on April 5 after three days on route, christening their path Ruth Gorge Grinder (AI6+ M7 5000’). 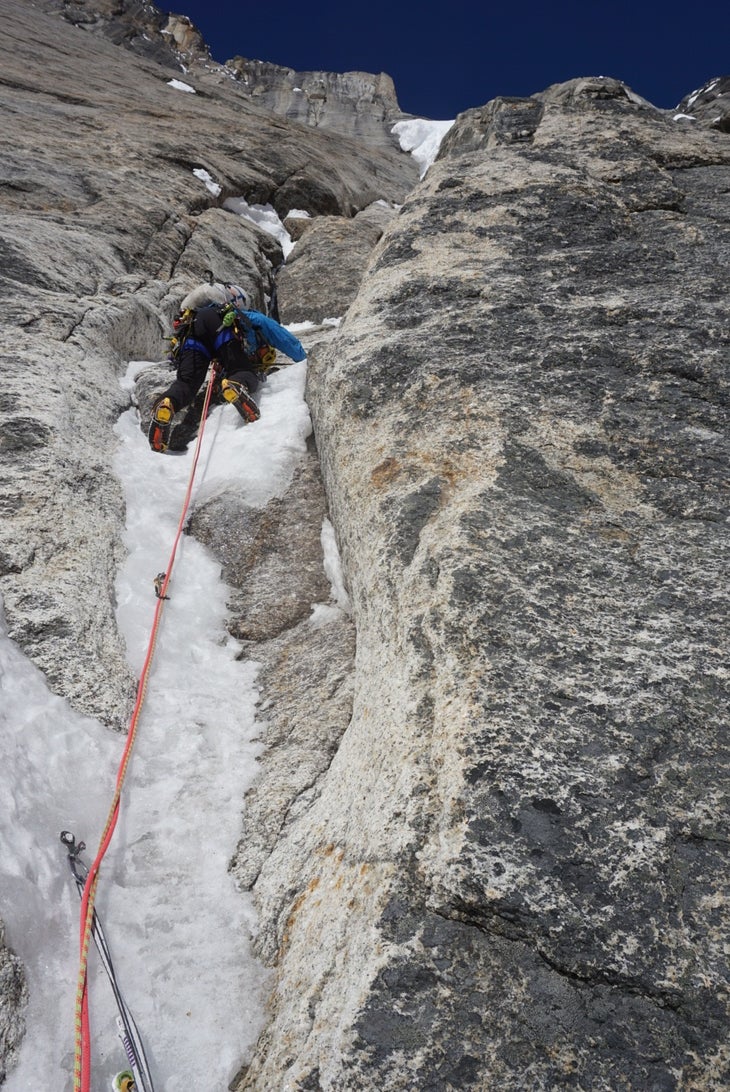 Marvell spoke highly of the Black Diamond gear in his arsenal on Dickey. “The Ice Blitz pack in particular is awesome,” he said. “Small, compact. When you’re climbing in chimneys like that, there aren’t a lot of straps on the outside to get hung up on things, which is sweet. I also dug the Sharp End Shell. After all the tight chimneys we were in, it showed barely any wear at the end of the trip. It stood up like a champ.” 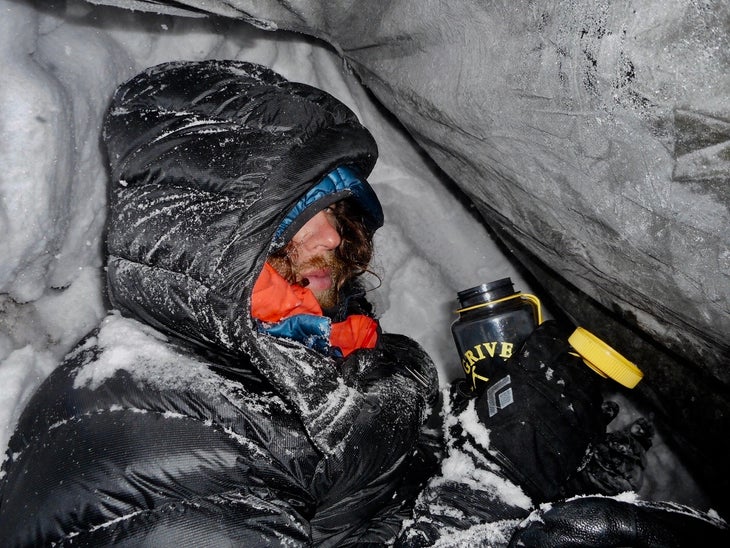 After taking down Ruth Gorge Grinder only a few days into their trip, Marvell and Rousseau tagged a repeat of The Trailer Park (WI6 M6+ 3200’) a Kelly Cordes / Scott DeCapio line on London Tower, before turning their sights to Bradley, where Rousseau was injured.

After the injury, the pair was able to rappel off the technical terrain with Rousseau on belay, at which point Marvell tied their ropes together and belayed Rousseau down the lighter terrain 400 feet at a time. “After each pitch he’d just dig a hole and sit down, trying to stay conscious,” Marvell said. Luckily, the pair made it off the wall without incident, then down to the glacier and out, a feat Marvell credits to Rousseau’s “tough as nails” nature and a rapid response from Talkeetna Air Taxi, who had the pair flying off the glacier less than 90 minutes after they called in. To hear Marvell tell it, it was a miracle Rousseau was able to function at all. Normal eye pressure ranges from 12 – 22 mmHg, Rousseau’s eye was at 70 mmHg when they reached the hospital. Rousseau no longer has vision in his left eye as a result of the injury. Nevertheless, he’s still climbing and guiding, both in the States and abroad. When I spoke with Marvell in October, he told me that he’d heard from Rousseau that morning.

“He just texted me on his sat phone from the summit of a peak in Nepal,” Marvel said. I later found out Rousseau and partner Tino Villanueva had made the first ascent of the west face of Tengi Ragi Tau (6,948 meters / 22,795 feet), via a route they called Release the Kraken (AI5 M5+ 5,200’). This was Rousseau’s third attempt on the line. “Yeah… he’s a badass,” Marvell continued. “Forming a tight bond with Alan was really cool. Having partners that are resilient like that, that’s the most important thing in alpinism, and it’s something you don’t get often, if ever.”

The duo plans to return to Alaska together next spring.