Rock and Ice’s 2019 Photo Camp is Open for Enrollment

Billed as “one of the most beautiful climbing areas in America,” Wild Iris, an uplift of boney dolomitic limestone outside the ranching town of Lander, may surpass the hype. Here, waves of prairie grass deposit you at the foothills of the Winds as they roll into Limestone Mountain and the escarpments that are your raison d’être. You’ll notice that civilized development, and people, are few. The area remains raw, and it is said that from about November until May the snow, rather than melting, just blows around until it wears out.

Hail from the other 49 states and you may find this outpost of Wyoming lonely—the nearest city of any real size, Cheyenne, is four hours away, and the Cowboy State is number 50 in population. Tread the footpaths at dusk and you may meet Wild Iris local “Waffles,” a male grizzly bear.

In 1989 gold prospector Holly Skinner spied a cliffline outside Lander that reminded her of the limestone of Buoux, France. She mailed a letter of the discovery to her brother Todd, who lived in a tipi commune behind Mount Rushmore with Amy Whisler, Heidi Badaracco, Jacob Valdez, and Paul Piana.

“Within the hour” after reading the note, says Piana, “Todd and Amy and Jacob picked up their kit, left for this area Holly had found, and they never came back!”

Todd spent the next years of his life yamming off finger crushers including the first 5.14 established by an American, Throwin’ the Houlihan. Joining him were Whisler, Piana, Badaracco and Pete Delannoy, who remarked that when he discovered the O.K. Corral wall he was a “pig in shit.”

The rush was on. For the coming decade Wild Iris was one of the top places to be. Hungry for European-style limestone, Bosch-wielding climbers transformed Wild Iris into America’s version of the Frankenjura. The routes were short (60 feet is long). Hard. Sharp. Rarely downrated.

Twenty-seven years later Wild Iris shares favor with other calcium- carbonate wonders such as Ten Sleep, two and a half hours north, and Rifle, six hours south in Colorado, but the crag that Todd found is still abuzz. A resurgence in 2013 by the rebolter Sam Lightner, Jr. added new lines, and B.J. Tilden of Lander keeps Wild Iris on the map with bleak lines like Moonshine (5.14d) and Mutation (5.14d). The 2015 guidebook Lander Rock Climbs notes nearly 290 routes, heavy in 5.10 and 5.11, but with enough top-end lines to keep the pros stoked. New lines continue to be added.

Lander proper also continues to pulse with about 30 year-rounders, including Steve Bechtel, who can flog off your winter blubber at the Elemental Gym. The Lander scene, says local Michael Holland, is vibrant but chill.

“What is so amazing,” he says, “is that in our town, the same dude who is setting your boulder problems on the woodie at Elemental Gym is also the guy who just equipped the new route out at your new favorite crag … and he’s also the guy who is pouring your beers from the Lander Bar’s tap. This is, to me, the epitome of Lander: the definition of a small town of obsessed climbers, the true definition of a rural paradise.”

In July 2018 Lander will for the 24th time host the International Climbers’ Festival, and 500-odd climbers will take to the walls of Wild Iris and other crags including Sinks Canyon and Wolf Point. Afterward, back in town, they’ll watch films and raise pints to the native son who made it all happen. 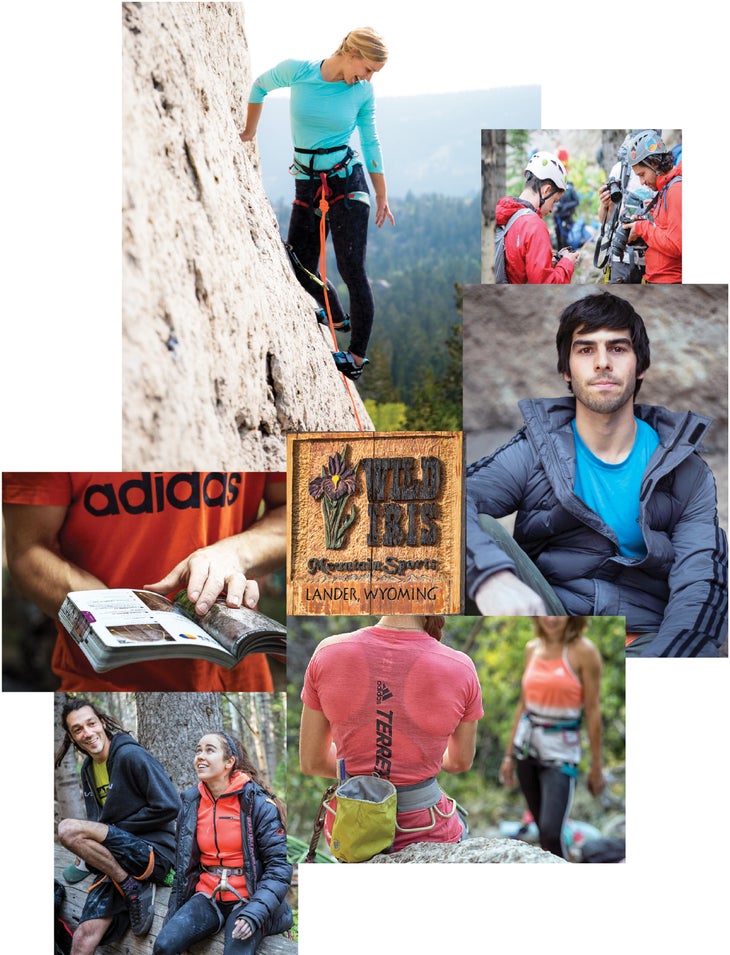 BELOW: Photocamp crew on happy trails to Wild Iris. Photo by Jon Cardwell. 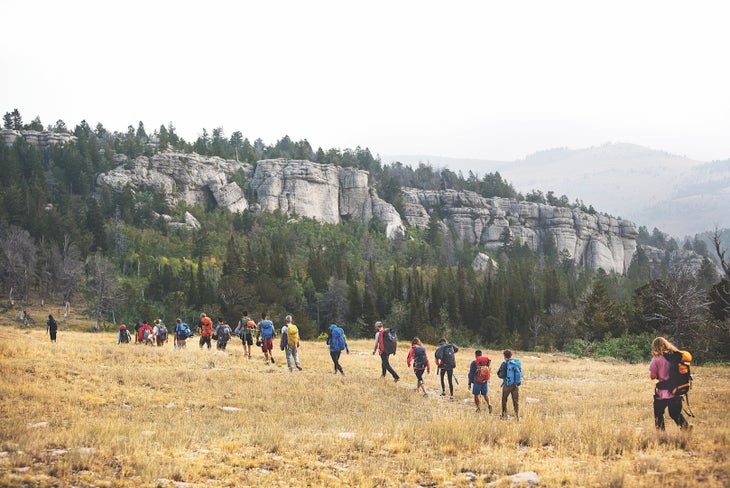 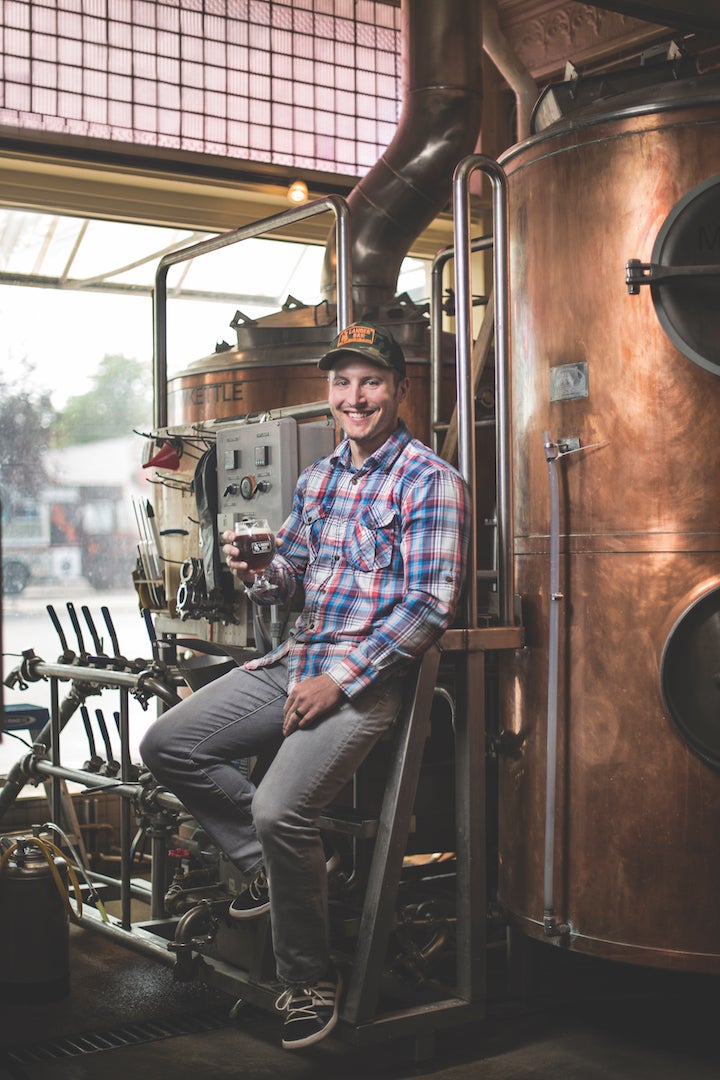 LEFT: The Lander restaurateur and chef Kyle Vassilopoulos was the unofficial guide at the 2017 Photo Camp. For several days the polymath, who has FAs of 5.14 and M13 under his belt, showed 15 student photographers the best and most spectacular lines of Wild Iris, or “The Iris.”

One evening Vassilopoulos stopped by the photo-group’s table at his restaurant the Cowfish, on Main Street in Lander. He had had, he said, one of the best days ever.

Vassilopoulos, an epic fly fisherman, had hooked into a slew of monsters, reeling in fish until his arm nearly gave out.

And where was the fishing hole?

A secret, said Vassilopoulos. Revealing the best of Lander apparently has its limits.

In this photo, Vassilopoulos enjoys a pint freshly tapped from his Lander Brewing Company adjacant to the climbers’ haunt: the Lander Bar and Grill. Photo: Chris Beauchamp.

BELOW RIGHT: Kat Butler lets fly on Bobcat Logic (5.12c) at the Rodeo Wave. Though only about 50-feet high, this swell of featured limestone packs a wallop. Some dozen lines criss-cross the area’s steepest shield and share bolts and holds to spawn the likes of Rodeo Free Europe (5.14a), Genetic Drifter (5.14c), High Way (5.14b) and Mutation (5.14d). Rodeo Wave is so stacked with difficulty it may be North America’s hardest piece of rock. Photo: Joey Scarr.

BELOW LEFT: Diego Lopez Montell and the savage opening pockets of Buck a Move (5.13a), at The Remuda, named for cowboy slang for a herd of horses that have been saddle broken. FA Badaracco, 1993. Photo by Ron Birk. 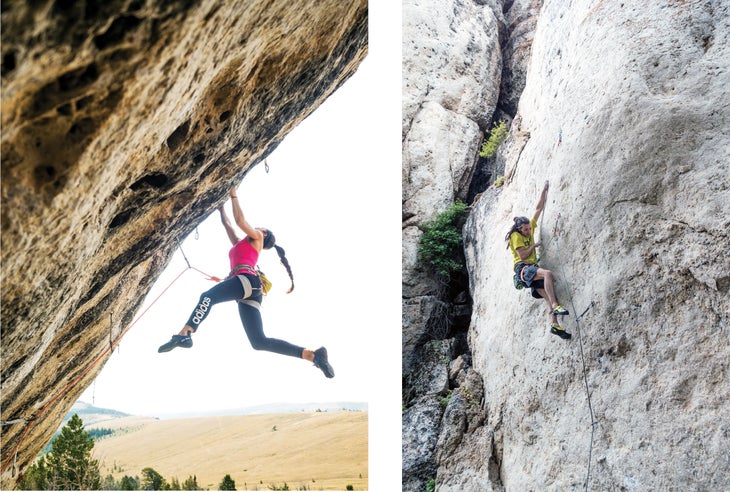 Ander Rockstad preps for sinister tugging on the Rodeo Wall.
Wild Iris got its name from the flowers that carpet the valley
within sight of some of the cliffs. Photo by Tobey Schmidt. 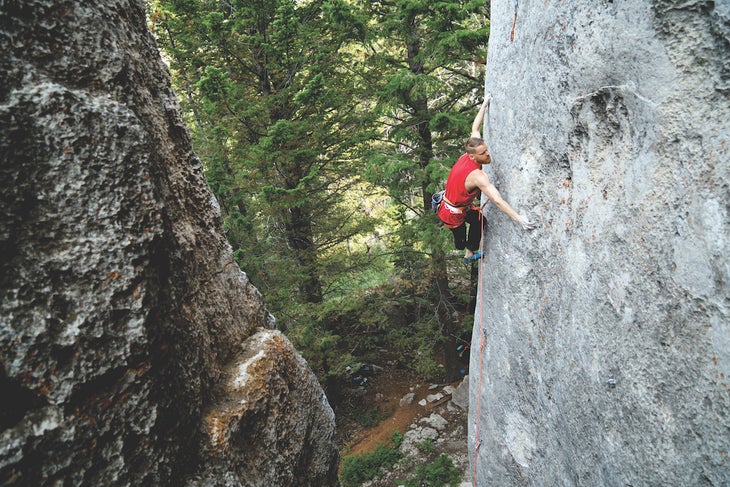 ABOVE LEFT: Diego Montell puts his bouldering power to proper use on the 40-foot but wildly steep Bobcat Logic (5.12c), yet another by Badaracco, circa 1992, at the Rodeo Wave.

ABOVE RIGHT: Ander Rockstad spans pockets on the just off-vertical Ghost Rider (5.11d) at The Remuda. Around the corner from the above is a Paul Piana masterpiece, Silverbelly (5.13a). Longtime climber Piana was a fixture at Wild Iris, where he added to his tally of some 600 first ascents.

When not busy new routing at Wild Iris, Piana and Skinner roamed the globe bagging big free walls that were revolutionary at the time. In 1998 Piana and Skinner made the very first free ascent of El Capitan, removing all aid from the Salathé in a nine-day push after 30 days of effort. Most climbers at the time believed El Cap might never be freed and found the Salathé climb so unbelievable they either ignored or discounted it. As we now know, the Salathé at 5.13b is well within the realm of doable for strong climbers, and free ascents, while still not routine, occur just about every season.

Montell on Buck a Move (5.13a).
Montell hails from Mexico City and lives to climb,
usually splitting his time between Boulder, Colorado,
and his favorite spot, Peñoles, Mexico,
where the
self-proclaimed hermit lives in a cave and scours the
desert for fresh blocs.
Photo by Tobey Schmidt. 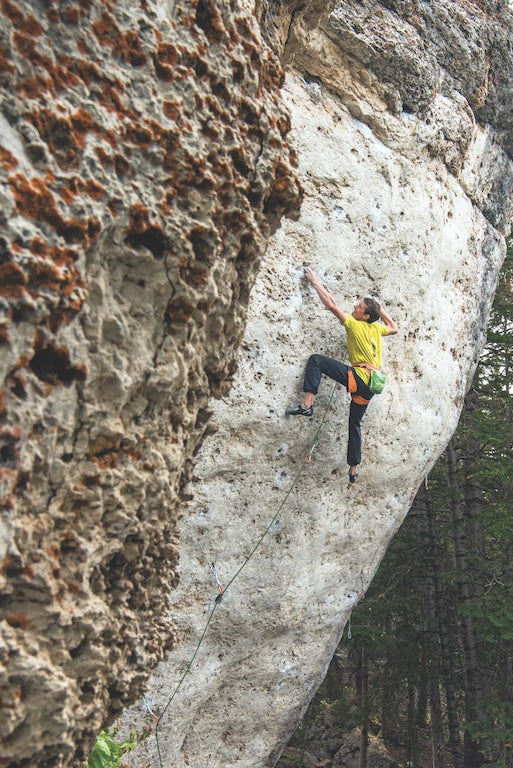 ABOVE: Michael Holland crosses paths with When I Was a Young Girl I Had Me a Cowboy (5.13a), on The Erratic. Holland, a school social worker at Fort Washakie School on the Wind River Reservation near Lander, says, “Wild Iris is one of those places where no matter how many times you find yourself there, you are struck by the impossible beauty of the place. When the wind dies down and the sun shines on a crisp autumn day, and the limestone’s perfect pockets and crimps show themselves in the slivers of shade on the wall, you just get this feeling that there is nowhere you’d rather be climbing. I keep climbing here because even after six years, I still have a few hundred more climbs to tick. The grades run from 5.6 to 5.14d. Eat your heart out.”

Aware that Wild Irisis’ diversity and rock quality would make it a popular destination, Piana was determined to keep the area on the DL, “However,’” he says “gregarious Todd simply couldn’t keep quiet about our new crags and no amount of convincing could contain his excitement.” Photo by Libby Schundler. 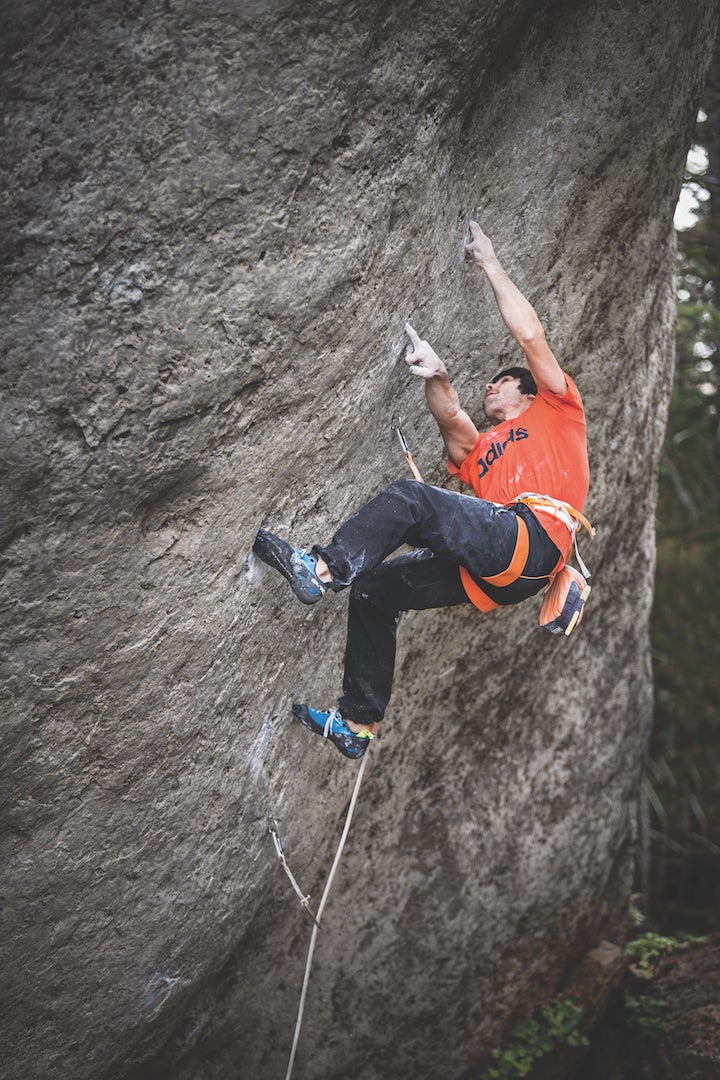 LEFT: Jon Cardwell and the infamous mono move on Throwin’ the Houlihan (5.14a). Cardwell dispatched Houlihan several weeks before this photo was taken and confirmed its difficulty. While other routes established in 1991 or before by Americans were given the lofty grade of 5.14, Houlihan may be the only one to retain the grade, the others being downrated. Today, with El Cap free soloed and 5.15d the new upper end, putting up a 5.14a is no longer news, but 26 years ago the grade was as remarkable and unknown as the futuristic grade of 5.18 is today. Photo by Chris Beauchamp.

BELOW: Montell achieves his own mono hell on Houlihan. Even Houlihan’s opening moves are hard—pulling both feet off the starting block and hanging very bad crimps on the overhanging wall is V9. Photo by Will Osborn.
Photo by Sean Milburn.

ABOVE LEFT: Tobey Schmidt on an excellent moderate, Sweaty Bully (5.10b). Photo by Adam Pawlikiewicz.

ABOVE RIGHT: Todd Skinner had an eye for quality lines, and one fine example is his Bronc Twister (5.13b), a 75-foot (long for Wild Iris) pitch on a breathtaking buttress at Aspen Glades. Bronc Twister begins on a delicate, technical, off-vert face and ends with pocket pulls out a horizontal roof and onto a crux bulge. It was a popular attraction at the photo camp, and in this shot Darren Flack of Lander meets the exit. Photo by Kassia Lawrence.

BELOW: On the hike to Wild Iris’s showpiece Main Wall, home to such gems as Wind and Rattlesnakes (5.12a) and Cowboy Poetry (5.11b), you pass a 30-foot-high outcrop—a wave of stone. It catches your eye. Then, wait, are those bolts? This crag, Rising From the Plains, is worth a quick stop and send or two. It’s right by the trail, so what the hey? Here, Kat Butler crimps through the route Rising From the Plains (5.12a). Photo by Mike Hopkins. 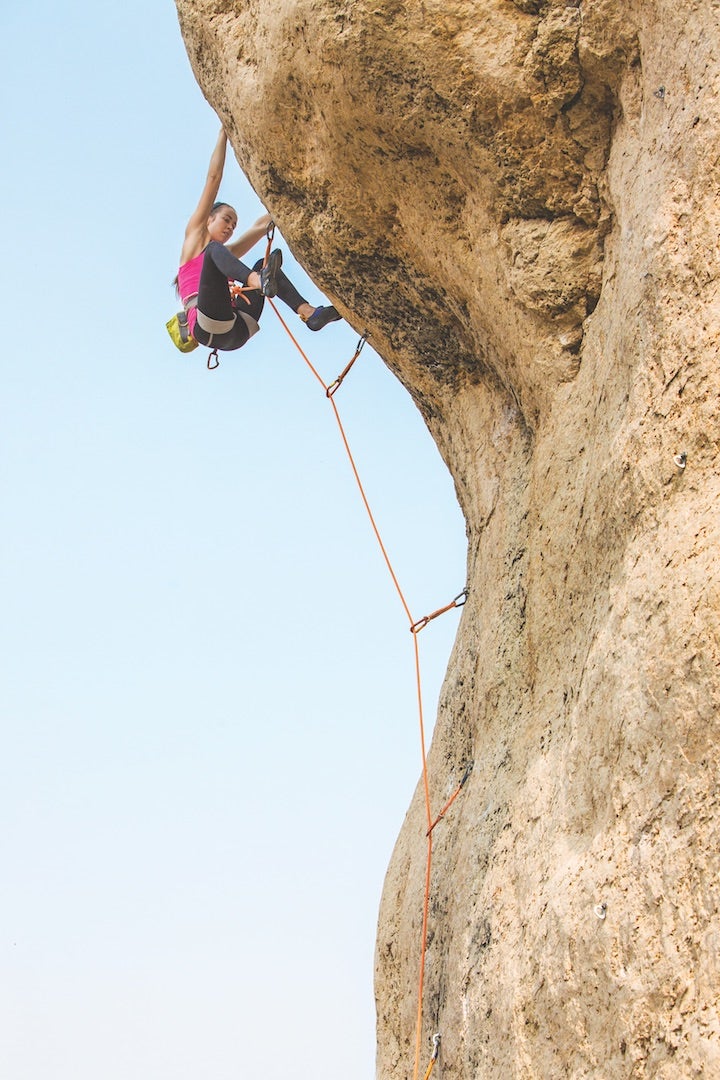 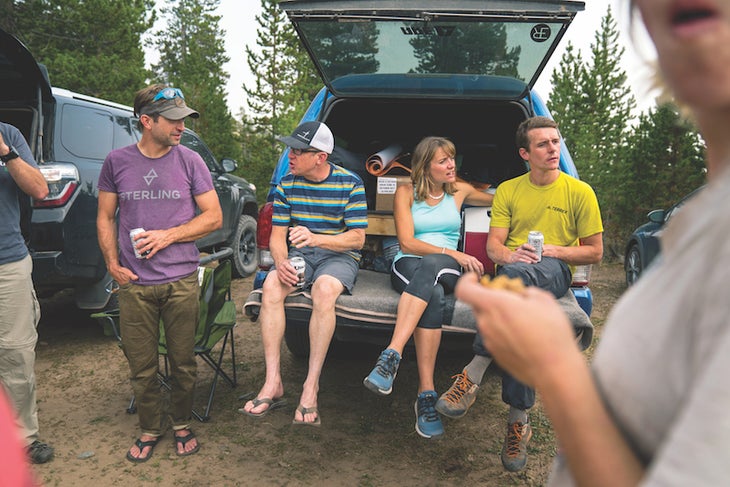 ABOVE: Instructors Jeff Rueppel and Randy Levensaler tailgate with photo-camp climbers—Rock and Ice’s Editorial Fellow Harriet Ridley and Kris McCoey on the right—ending the 2017 photo camp in style. Photo by Adam Pawlikiewicz.

RIGHT: If 5.13 isn’t your bag, 20 feet to the right of Bronc Twister you can tie into American Beauty (5.12b), an equally stunning line but a full number easier. Kat Butler styles the opening face. Photo by Jack Santo.

BELOW: Like Bronc Twister, American Beauty finishes on a series of inverted steps. Harriet Ridley rides the air bike at the final bulge as she clips the chains. Photo by Mike Hopkins. 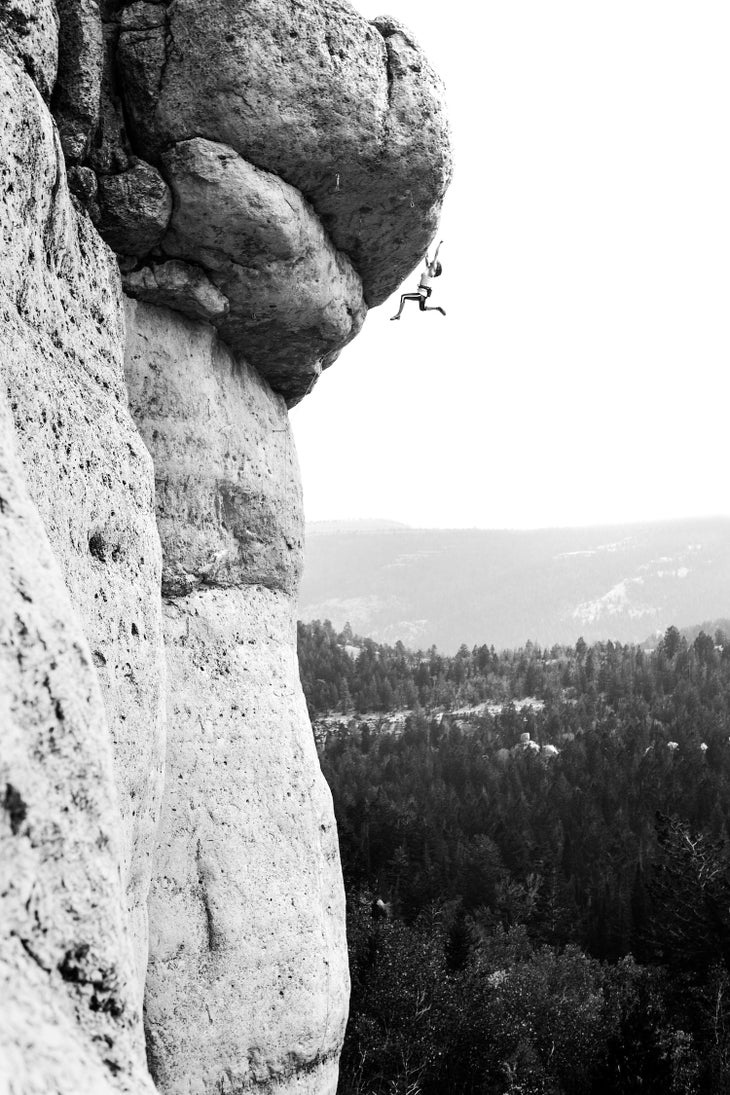 Special thanks to adidas and Five Ten for supporting the 2017 Photo Camp, and to all the climbers, photographers and supporting cast.

Feature Image: Kris McCoey, a mountaineering instructor and former plumber from Ireland, eases into the Dolomite pockets that are the trademark of Wild Iris on All He’s Ever Gonna Have (5.10a), Aspen Glades wall. Heidi Badaracco established the route in 1992. Photo: Jeff Edwards