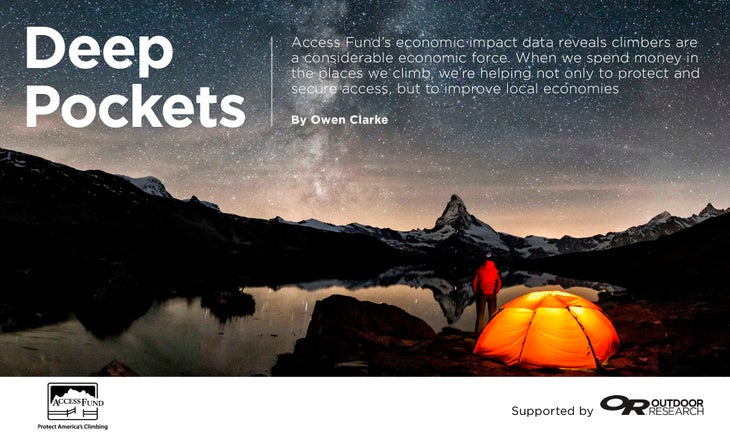 In climbing’s early history, our forebears weren’t exactly loaded with cash. We’ve all seen Valley Uprising. The pioneers of our sport, figures like Harding and Bridwell, were far from economically secure. As climbers, we often like to think of ourselves the same way. Dirtbags, nomads, vagabonds. Scraping enough cash to climb first, live later.

But climbing is no longer just the sport of vagabonds and dirtbags. Statistically, you probably hold a college degree or are working on one. Your gym membership is $75 (if you’re lucky), and you’re wearing a pair of climbing pants probably worth more than every pair of pants Jim Bridwell owned in any year all together. But that’s not a bad thing. As economic-impact data gathered by Access Fund shows, climbers are a sizable economic force, and the money we spend at and around the crag has a profound impact not only on securing and prolonging access, but on the lives of those who live in the places we climb. 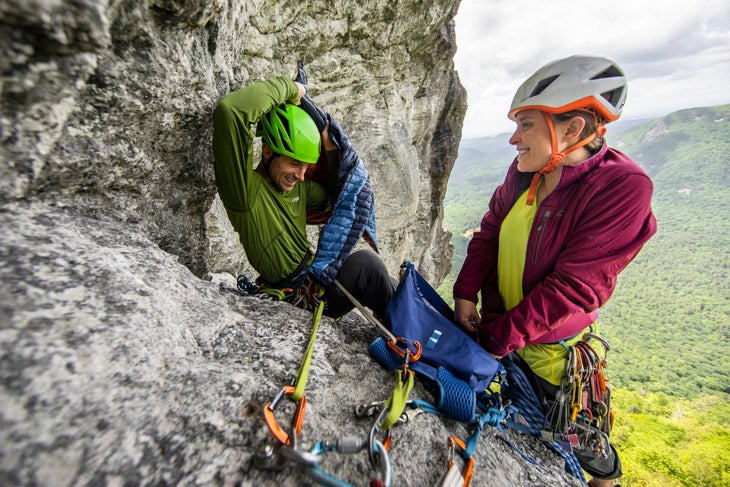 The crags of the Southeast, in particular, are often situated near poverty-stricken rural communities. These so-called “gateway” communities, like the counties around Kentucky’s Red River Gorge, some of the poorest in the country, are increasingly benefiting from the economic boost visiting climbers provide. A recent study sponsored in part by Access Fund found that climbers spend $3.6 million annually in the Red. A 2019 study found climbing brings in a hefty $12.1 million in yearly spending to West Virginia’s New River Gorge. Another found $13.9 million comes to North Carolina’s Nantahala-Pisgah National Forest annually as a result of visiting climbers.

This might seem surprising, as climbers are a notoriously frugal breed. As the RRG study notes, “prevailing myths about rock climbers often suggest they are uneducated, unemployed, and contribute little to the local economy.” But the research shows some surprising statistics. Over half those surveyed in the RRG study held college degrees, and the majority of the remainder were in the process of completing one. Most participants in the Nantahala-Pisgah study had annual incomes exceeding $50,000, a whopping 37% had completed more than a four-year degree and over 20% owned their own business.

Zachary Lesch-Huie, Access Fund’s Southeast Region Director, spoke to the unique benefits climbing tourism holds. “Climbers are ideal economic actors,” he said. “We don’t just visit once. We like to go to a new area, then return over and over again. At the same time, we like to try new spots. We’re into traveling, we’re into repeat visits, and we have a little extra money to spend.” Climbers are also typically excellent outdoor stewards, practicing Leave No Trace policies and camping and traveling sustainably. Participants in a Chattanooga economic-impact study overwhelmingly cited “the climber” as holding primary responsibility for caring for and maintaining the natural areas which support climbing, as opposed to land managers or non-profit organizations. As far as outdoor recreation and tourism goes, you can’t get much better than that.

As a result, the economic-impact data found in studies like those at the Red isn’t just good news for local economies. It’s proven critical to Access Fund’s efforts to gain and protect climbing access nationwide. “When local communities understand our economic impact, this in turn protects our climbing and resources better,” said Lesch-Huie. Whether state agencies, local town managers or park managers, minds are swayed by both the dollar climbing can bring and the conscientious manner in which climbers approach outdoor recreation. “When they see these statistics, these communities want us to come back, and they support our access efforts,” Lesch-Huie added. 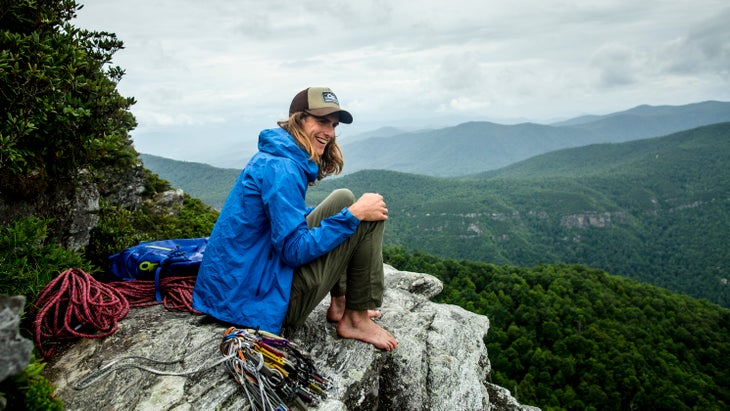 From Breaks Interstate Park along the Virginia-Kentucky border, to crags in eastern Tennessee, to the recent initiative to protect Utah’s San Raphael Swell (which resulted in the first climbing legislation in U.S. history), economic-impact data is a key factor in the consideration of opening climbing areas. The Joe’s Valley film, United States of Joe’s, in this year’s Reel Rock, highlights another example. “[With Joe’s Valley] we had a real rural spot with an economy largely based on resource extraction,” said Lesch-Huie, “and now climbing is bringing in a lot of money and changing lives.”

The impacts don’t stop with simple tourism spending, either. Often climbers are choosing to live in the places they climb, moving or buying second homes, contributing to the tax base, sometimes even investing in local businesses. “When people spend time outside climbing with their family and friends, they are healthier, happier and more productive,” said Chris Winter, Access Fund’s Executive Director. “They also support and give back to the local communities where they live, work and play. These economic impact studies help to tell that story, so policy makers and our other partners really understand why climbing and our community are so special.”

While the majority of these studies focus on gateway communities in the rural South, Access Fund is financing climbing economic-impact research nationwide. Studies have covered Montana and Nevada and others are currently underway, from crags in New England to an updated study at the Red River Gorge, all supported by Access Fund.

Aside from being a member or donor, there are a few things we as climbers can keep in mind to help. Pick up your trash, keep the noise down, and don’t camp on property without permission, obviously, but also spend a bit of cash in the places you climb. “I encourage folks to stop by mom-and-pop shops and buy a drink or snack,” Lesch-Huie said. “Don’t drive an hour away and spend your money in the city. Swing by one of these local businesses and spend some money. Find a locally owned campground, rent a cabin that’s locally owned, be a good ambassador for our community.” In doing so, we’re not only helping ensure future access to the crags we love, we’re supporting the people that live there.

Protect Public Lands By Donating to the Access Fund Now!