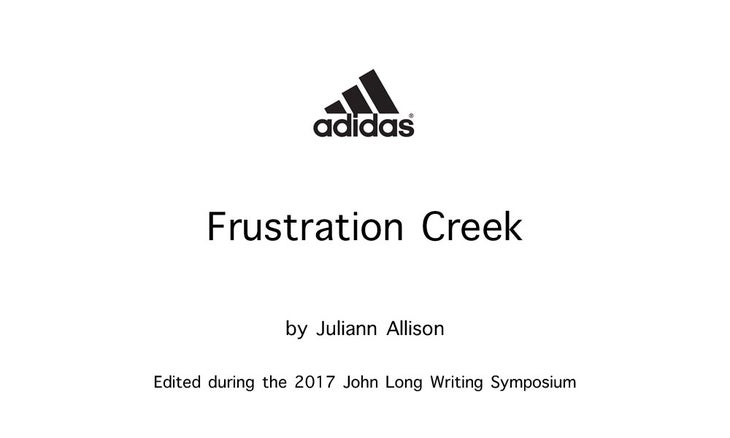 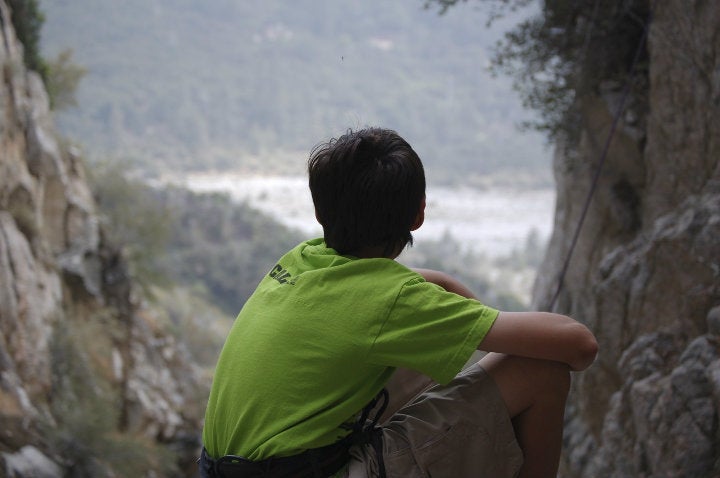 I woke up in my Civic, parked in a turnout across Highway 38 from Frustration Creek, a slot canyon in California’s San Bernardino Mountains. An hour earlier, my teenage son, Quentin, and his friend Tyler had gone ahead into the canyon, leaving me to sleep off a migraine. “I’ll follow you in a little while,” I’d said. “I just need to close my eyes and rest until my drugs kick in.”

Now the pain was gone, but the pulsing lingered like an unsettled spirit. I felt muzzy, disassociated from my surroundings, and fragile, as if anything—the sun, the weight of a backpack, a loud noise—might provoke another headache. Still, I was intent on catching up with the boys. I left the car, grabbed my climbing bag, and jogged across the highway.

I climbed for the first time at Girl Scout camp when I was nine, but never invested the time needed to develop any expertise before inheriting my brother Craig’s climbing gear after he died in a motorcycle accident. Craig was the risk-taker among my eight siblings. Until his death, I’d been happy to play the family’s scholar. Since then, I’d felt broken and incomplete—except when I was climbing. The focus and attention to my environment and body that climbing requires could induce a kind of moving meditation that psychologist Mihaly Csikszentmihalyi coined “flow.” When climbing yielded flow experience, I was whole again.

I followed a dusty trail through a yellow and white field of wild mustard and milkweed into the canyon. The trail ended at the base of short, juggy climb beside a waterfall. Though some climbers free solo the route—a sketchy 5.6, I’d always climbed a fixed rope hand-over- hand. But there was no rope. The boys must have pulled the rope after ascending or taken advantage of my absence to solo, I thought.

Disregarding the knot in my stomach, I searched the rock for starting holds. I climbed with care, reaching around the stinging nettle sticking out of cliffside cracks, and watching for secure footholds on the slick gray rock. Though I couldn’t see the boys from the top, the canyon amplified Quentin’s voice. “Nice, buddy…Yeah, that’s it!”

I hopped the creek, scrambled up a boulder that bulged out of the canyon wall, and grabbed ahold of a fixed rope rail along a narrow rock and dirt trail to the canyon’s upper tier. “Hey!” I called out.

“You made it,” Quentin said.

“We only brought one…” he started.

“Which you didn’t use anyway, I know…”

Contrary to my usual preoccupation with climbing safety, I was unperturbed by the boys’ tacit disobedience, not even riled to caution them against risky climbing decisions. 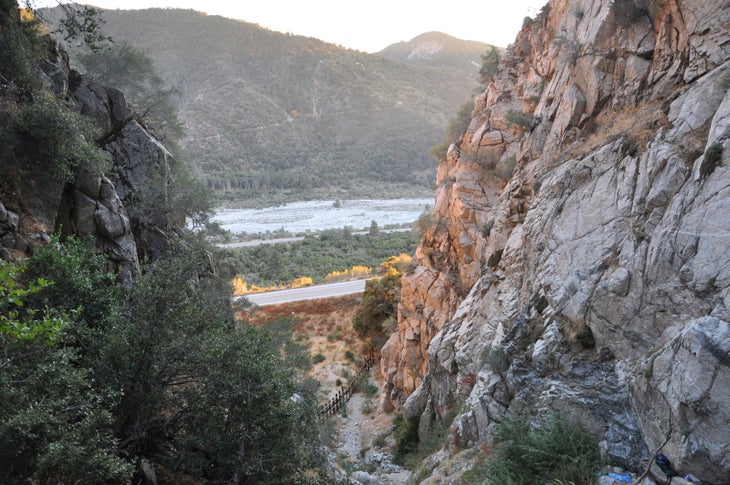 My project was Delusions (5.11c), a sixty-foot route that requires sustained climbing from an eight-foot ledge near the first bolt, the only one without permos. I smiled when I recognized our draw already hanging there—by the thick Chouinard-era Black Diamond dogbone. Both Quentin and I learned to lead with Craig’s gear, which included thirteen of those distinctive extenders. It was tough not to think of him each time I clipped.

Quentin had become an adept and competitive climber who sent Delusions on his second go less than a year after he started climbing; I still struggled to complete the stretch from a committed match where my feet cut through the crux without weighting the rope, or cursing. Delusions’ varied and reachy moves also challenged Tyler, who was much shorter than Quentin, and a far less agile climber. When we were too pumped to continue, Tyler pulled the rope and we took turns belaying Quentin on his project, Narcissist (5.13a).

When we packed up a while later, the boys charged ahead, racing over rocks to the trail, then back down the opposite canyon wall. As soon as they reached the waterfall, Tyler slipped over the edge and started down climbing. Ignoring obvious risks, I squatted near the top of the fifteen-foot route, then hesitated. “Shouldn’t you go first, to spot me?” I asked Quentin.

Tired and dizzy, I focused on the water-streaked rock to steady myself. Moist, gritty soil and bits of crushed shrubs and grass torn from the creek’s bank by a recent storm had washed over the fall and clung to the rock closest to the water. “Breathe,” I told myself. Then I pushed away from the wall just far enough to look for a foothold on the grimy surface. My right hand slipped on the choss, and I fell backward. I forced myself upright, grasped for the rock in front of me, missed. My knees, hips, chest and forehead banged against protruding, wet rocks all the way down. I tried to land like a crouching cat, but hit the rock piled at the base of the waterfall hard, wedging my right ankle among the sharp-edged boulders.

Quentin hurried halfway down the wall before leaping onto the dirt base beside the water and rock fall and scrambling toward me. I stood up and tried to pull my foot and ankle out of the rocks, but was too shaky to remain upright. Quentin reached me just in time to catch my fall.

Climbers working routes nearby in the canyon’s lower tier had seen me fall and ran over to assist; one of them was an experienced medic. He helped Quentin to extricate my ankle while his partner hurried to get the first aid kit. Though my ankle was swollen hard, lacerated, and bleeding profusely, I wasn’t in pain. The medic cleaned and wrapped the wound, and Quentin helped me to the car.

I drove the boys from Frustration to the climbing gym, where Quentin was scheduled to work, and Tyler would wait for his parents. Feeling in my limbs returned. My ankle throbbed every time I shifted my food to negotiate the curves down and out of the mountains, and the abrasions on my hands, forearms, and thigh burned the entire way. “Why didn’t you just set a rope?” I asked.

“But you did, in the car, before we left.” He sounded sincere, but I didn’t recall any such exchange.

At home, my spouse, Ted, helped remove my blood-soaked shoe and rinsed my gashed ankle under the bath tub faucet. The water ran red. “This is deep,” he said. “You’re going to need stitches.” Ted re-wrapped my ankle and drove me to urgent care.

By the time I saw a doctor, my left ankle was also swollen and it hurt to breathe. The doctor ordered X-rays and confirmed that my ankle required stitches.

“Why were you climbing without a rope?” he asked.

Why the hell did I down-climb rather than insist on rappelling? Maybe overconfidence. I’d climbed up, after all, and mastered a tough series of moves on a much more difficult route. I could blame it on my post-migranal high, a kind of delirium that emerges once the headache dissipates. Or just call it a hapless misadventure.

Until that moment in the ER, I had not been able to comprehend Craig’s death. The Colorado State Patrol reported that Craig skidded on gravel on Route 24 near Manitou Springs, lost control of his bike, and was ejected sixty feet. He died on impact. But Craig never would have risked riding near the guardrail where sand accumulates in early spring. Yet my sagacious brother had swapped his helmet for cheap drugstore sunglasses to temper a migraine before climbing on his motorcycle for that final ride with the Thunder Bird bike club.

“Don’t let go” is a familiar climbing imperative. But climbers do let go—at the top of a route, to rest en route, or even to practice falling. Sometimes, though, the rock lets go of the climber. A hold breaks and all the climber can do is try to relax, breathe, and land on her feet.

My wounded right ankle required eight broad stitches, and it would take weeks for my sprained left ankle and broken ribs to heal. Craig was not so lucky. 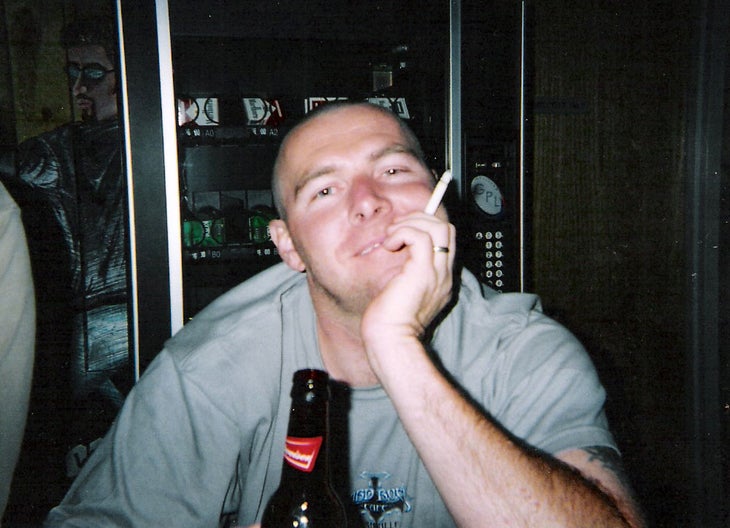