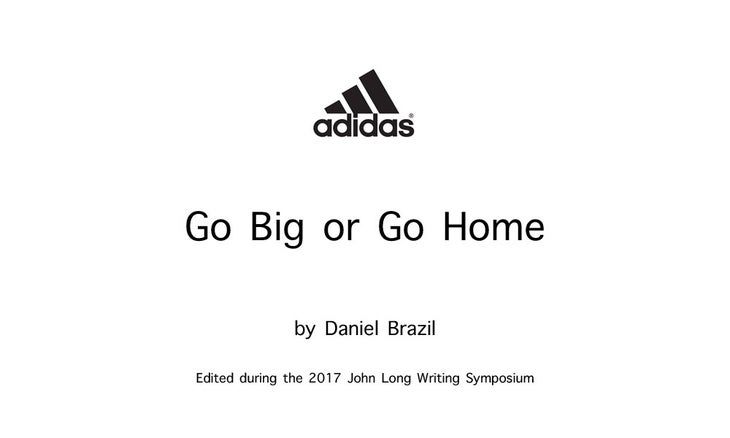 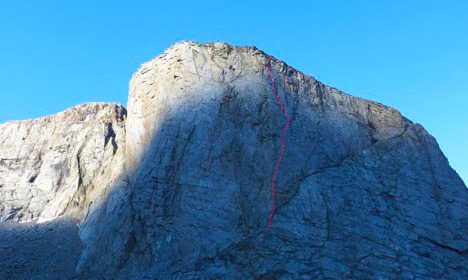 Seven hundred feet up. I stared into a shadowy chimney, as Chris handed me the rack. Sucking in a deep breath, I inched my way up until I reached a large flake on a small ledge. As I tested it with my palm, the suitcase sized-flake crunched as it teetered back and forth. “This thing is super sketch,” I called to Chris. “I can’t get past it.” If I released the flake, it could take out Chris, the ropes and me.

Five months earlier, I’d sat comfortably in my favorite coffee shop. I scrolled through my emails, daydreaming of alpine starts, the feel of orange granite under my fingertips, and splitter cracks shooting skyward. A message from the American Alpine Club popped up with an invitation to apply for the Live Your Dream grant, and my mind raced with ideas.

I was almost 50 and felt like my best climbing days were slipping away. With a list of routes I wanted to tick, I’d concocted a crazy scheme to climb 50 climbs across North America before my 50th birthday.

I dubbed my project Climb50x50. I secured the URL, designed a website to showcase my climbs and, of course, set up a blog. My wife Bronwyn, certain I was suffering a mid-life crisis, reasoned that a few repairs to our Volkswagen Westy and a handful of plane tickets would cause less financial strain on our family than me quitting my job and moving to Camp 4.

Staring at the email, I contemplated the question: What was my dream?

Of all the disciplines, I gravitated toward traditional climbing. I loved exposure and adventuring into the unknown. I traveled obsessively ticking off many of the classic trade routes: the Nose on El Cap, Direct Northwest Face of Half Dome, Northeast Ridge of Bugaboo Spire, Levitation 29, and Moonlight Buttress.

But, I had yet to place a bolt or find my way up a virgin wall.

I sent an email to my friend Chris Hirsch and told him about the grant. Chris, nearly half my age, was on a rampage. Since moving to Rapid City, South Dakota in 2009, he had established over 80 ground-up first ascents in the Black Hills and nearby Wyoming, with grades clocking in at 5.12 to 5.13+, and in a bold, run-out style.

Chris’ vision and unbridled energy to put up new routes in the Hills was reminiscent of a time 20 years earlier when the great partnership of Todd Skinner and Paul Piana paved their way across the Western states with groundbreaking ascents in the Black Hills, at Devils Tower and Wild Iris. Chris seemed hell bent on following in their footsteps with repeats of the duo’s Jackknife Matinee (5.13a) and the first ascent of Atomic Slap (5.13b). He onsighted Skinner’s Let Me Go Wild and Animal Cracker Land at Devils Tower, proving he could hold on to thin holds forever.

Chris had told me about a remote wall in Wyoming’s Cloud Peak Wilderness that he had visited the previous summer. With visions of honoring Skinner and Piana, I asked if Chris would include me in a first ascent.

Within minutes, he sent a crude topo of the Great Spirit Wall that detailed Piana’s original route, three established lines outlined in various colors, and our objective in red.

The subject line read: “Yeah man, send it in!”

I fired off our application, and a month later the AAC awarded us the grant.

Our grant included a small stipend to buy bolts, provisions, and gear to put up a route in honor of Skinner and Piana’s legacy. My dream was about to come true.

In the summer of 2014, a week before I met up with Chris to head into the Cloud Peak, Bronwyn, my son Rhys and our friends Bevie and Charlie stopped in Lander, Wyoming to climb at Wild Iris. Skinner and Piana had developed the area in the 1980s.

Skinner grew up near Pinedale, Wyoming, near the Wind River Range. He began climbing at age 11, and later relocated to Lander, Wyoming, which became the staging ground for Skinner and his posse to train for audacious first ascents around the globe. He met Piana bouldering at the University of Wyoming. Over three decades, they climbed together from Yosemite to Vietnam to Venezuela, establishing an epic first ascent on a 2,700-foot granite monolith in the heart of the Amazon rainforest. The pair free climbed the Salathe Wall in 1988, at the inception of modern free attempts on El Capitan. In their wake, they left a mind numbing anthology of first ascents.

Skinner, with his go-for-it style, was the ultimate climbing bad ass, pushing the standards of free climbing and adventure. But in 2006, he fell to his death when his climbing harness failed in a freak accident in Yosemite Valley. He was 47 years old, leaving behind his wife Amy Skinner and their three young children. His family, friends and the climbing community were stunned.

Piana continued to climb, and I heard rumors of a remote wall he discovered in the Cloud Peak when he and Skinner had flown over the range 20 years earlier.

Years later, Chris met Piana, who was still scouring the Black Hills for new routes. With a vow of secrecy, Piana fed Chris the beta to develop the wall he named The Great Spirit.

As we climbed at Wild Iris’ O.K. Corral, a small group of women roped up nearby.

“Dan, Charlie just overheard that one of the women climbing is Amy Skinner. Isn’t that Todd Skinner’s wife?” said Bevie.

We stared at one another for a moment.

I approached Amy. She stood 30 feet away and gazed up at a climb. She was petite, blue-eyed with long brown hair in a pony tail. She turned to look at me.

I introduced myself awkwardly.

Tears welled up in her eyes.

I expected her to be excited, but I sensed she had heard of bold plans before.

“Yes, I’m going with Chris Hirsch…Paul Piana had flown over the area with Todd,” I continued.

“Who? Oh, wait…Paul mentioned Chris. It’s so amazing that Todd’s inspiration lives on,” she said.

A soft smile met mine as Bronwyn and Rhys walked over and introduced themselves. Amy called to her daughter Sarah—a thin, brown-eyed girl of about 15 or 16.

She introduced us to Sarah, quickly describing our plan to put up a new route in honor of her dad.

Their loss of a husband and a father suddenly hit me like a wild pitch. I stood there looking at Sarah with my son’s little hand pressed into mine.

Amy glanced at Rhys, “How old are you?”

We talked about the days ahead, exchanged warm hugs and returned to climbing. Amy asked that I email her with all the details of our ascent.

I walked back to join Bevie, and glanced at Bronwyn and Rhys now playing in a nearby stick fort.

A week later, Chris and I arrived at the trailhead into the Cloud Peak. Wispy clouds with deep purple hues formed on the western horizon. Tall switch grass waved lazily in the light evening breeze.

The Great Spirit came into view. Like the prow of a ship, it stood proud against the horizon. Another wall joined it from the left, creating a perfect cirque. Yet my uncertainty returned. The risk of rock fall seemed unavoidable as Chris pointed to large flake systems that had cleaved off since his last visit a year before. I began to feel my dream transforming into a nightmare of apprehension.

The next day, we racked up at the base. I worked my way up some easy fifth class, with loose rock littering every stance. Chris swung through and ran it out between small cam placements, following a discontinuous crack and thin edges. We zig-zagged up the wall three more pitches to a decent ledge that led to a chimney. We hand-drilled a bolt, then fixed our ropes to the ground.

Back in camp, we identified a key feature that we named the “Gun Pitch,” its pistol shape reminding me of Skinner’s cowboy persona. It felt surreal to see the route coming together. But, a part of me didn’t want to go back up. 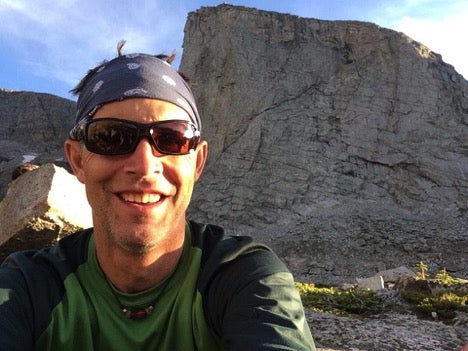 The next morning, we jugged to our high point. I studied the obstacle in front of me—the loose flake, probably 100 plus pounds, sat precariously waiting to wipe me out. I thought about turning the lead over to Chris, but reminded myself of Skinner and his go-big-or-go-home attitude. I put aside my doubts and decided to go big.

Chris suggested a thin crack out left. I dipped my right hand deep into my chalk bag.

Holding my breath, I mantled on to the ledge next to the menacing flake and moved left. I placed a series of micro cams and back cleaned each one to prevent rope drag as I moved back toward the chimney above.

Soon, I was 20 feet above the flake, which now looked far, far below. I steadied my breathing. As I searched for the next hold, I could see every molecule of granite. Nothing mattered except the features in front of me.

I yelled back down, “This pitch is awesome!”

I finished my lead on a perfect ledge and rigged the anchor. Chris left the belay and kicked the suitcase of granite into space. It smashed into the ledge where he had stood, exploding into hundreds of pieces. The smell of ozone, as if from a firecracker, filled the air. It’s acrid odor instantly reminded me of all I had to lose. Like Skinner, we could have died. The violence of its aftermath left me aching with thoughts of Bronwyn and Rhys waiting for me to come home.

A pitch later, we stood on the summit. We had done it. Like Skinner, I hadn’t backed down and my dream came true. But as the sunlight peaked through the lazy clouds drifting overhead, I thought back to standing there with Amy’s eyes wet with tears and my son gripping my hand like a lifeline.

The next morning, as we packed up our gear to start another climb, a part of me couldn’t wait to get back on route, and the other part wanted to leave and never come back.

DanielBrazil participated in the the 2017 John Long Writing Symposium, an annual writing workshop run by Rock and Ice.Dan and Chris are plotting a return trip to the Cloud Peak in 2017 to celebrate the completion of Dan’s 50×50 project with a repeat of their route, Wild Wild West, and a plans for one more first ascent