Photos and Text by Tim Foote

The Club, 9a; Rifle, Colorado, USA

Jonathan Siegrist was gearing up for his fourth and final try of the day on Vente Años Despues (Twenty Years After), a 5.14d, before we would walk through the grove of trees that separates the tiny winding road and crag in Siurana, Spain. The walk would either be celebratory or bittersweet.

Before he started the route we could tell that he was not excited about the bouldery cruxes above. But as he moved upward, somehow he fought through the first two and stuck the final move on the third with a shout.

We watched anxiously from the ground; despite the remaining climbing being no harder than 5.12, nothing was guaranteed. Siegrist hollered down about the “maniacal pump” he was facing after finding a good spot to rest. We were preparing for the disappointment of a slip or fall due to the pump.

And then we heard a shout from the anchors. Sweet success.

Back on the ground, Siegrist relived the route and moved his hands in the air recounting the cruxes. All climbers are similar to this extent: we all make those silly hand motions to describe our beta, closing our eyes briefly as we recall a move or sequence.

Siegrist’s send of Vente Años Despues was special. It was his tenth 5.14d or harder of the year, an informal goal he had gradually chipped away at in 2017. Walking out through that grove of trees, we all felt psyched.

Read on after the break for an interview with Siegrist.

I never spoke aloud really about my goal and even to myself it was sitting in the back of my mind and heart—not like some goals that have been in the forefront for me. This allowed me to kind of just enjoy each zone I was in, and focus on the individual routes (and other routes not 9a) slowly ticking away on the road to the end. Late in the summer it seemed like it could be possible and then I got a little more excited and started to sprint to the finish line.

Siegrist takes a bit of a break to fight the pump on Vente Años Despues.

Tim Foote: Of the many routes you finished this year, which gave you the most satisfaction?

Jonathan Siegrist: Unquestionably Pachamama. It’s my hardest route, and it was the culmination of a huge battle last winter that proved unsuccessful. To have returned to it and completed it is one of the crowning achievements of my climbing for sure.

TF: Did you at any point think one of those ten routes was impossible to do this year (after a first attempt or after continuing failed attempts)?

JS: Definitely! Many of them felt that way for me. Chaxi was so incredibly bouldery and after my first couple tries it still seemed impossible, but I got super lucky with a cool weather period and I pieced it together. I had so much momentum during that time and I really just would not give up on anything that I tried. Another impossibility at first was the move at the end of Los Incomformistas. It was so bizarre and hard for me. I fell there many times and wondered if I could make it happen as the trip was winding down and my body was starting to feel super beat up. In the end though, Vente Años Despues—man, I almost didn’t try it because it’s so morpho and it felt like both cruxes would be a roll of the dice for me. But I’m super happy my stubborn ass stuck with it because my send was one of the best fights of my whole year. I love those moments when you’re barely in there.

TF: After one of the best years climbing of your life, what’s been a highlight aside from those sends?

JS: The first thing that comes to mind is two long nights of seeing my favorite musician play—once in Atlanta and once in Barcelona. They were two of my favorite nights out in years. It was also just rad to take a step back from training and spend so much time out on rock: outside with friends and dogs and the sun… Living in my truck like back in the day and exploring a couple of new-to-me crags like Pop Tire, Utah, and some in Spain as well like Figols and Santa Linya.

TF: Sometimes a goal can take away or distract you from enjoying yourself. How did you use your goal to motivate you and enhance your experiences this past year?

JS: I never spoke aloud really about my goal and even to myself it was sitting in the back of my mind and heart—not like some goals that have been in the forefront for me. This allowed me to kind of just enjoy each zone I was in, and focus on the individual routes (and other routes not 9a) slowly ticking away on the road to the end. Late in the summer it seemed like it could be possible and then I got a little more excited and started to sprint to the finish line.

TF: Would you ever climb any of these routes again?

JS: Routes that hard I would never reclimb… Too many other things to do!

TF: As far as climbing accomplishments go, would you say this is your proudest achievement?

JS: I am no doubt very, very proud of this. It would be a lie for me to say that this has not been my best year of climbing, but I see it as a piece of the puzzle. I think it speaks to how far I have come and as much as anything else, it is encouraging me to take the next step. The greatest accomplishment of my year was returning to Pachamama, and having the strength to try a route that had so much intense energy for me (after a month of failure through the winter). 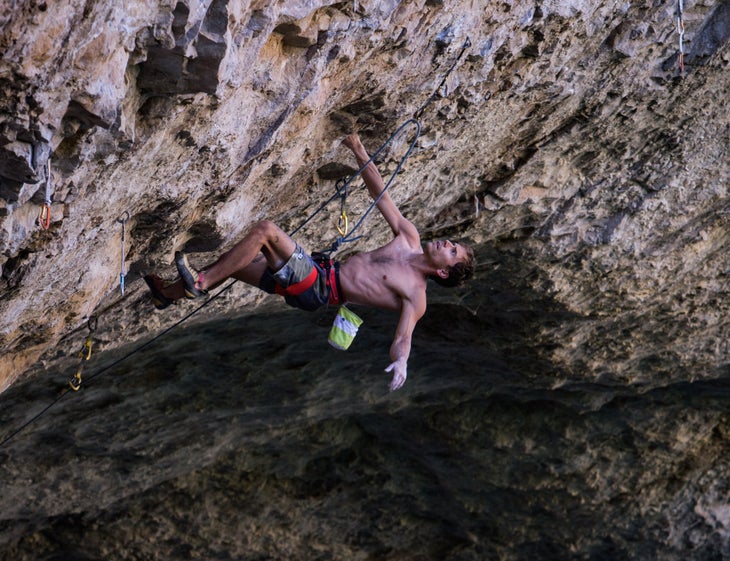 Jonathan Siegrist resting before finishing the remainder of Planet Garbage in Rifle, CO this past summer.